The friendly hum of good-humored conversation, punctuated by peals of happy laughter, proves that neither a clock nor a calendar is necessary to know that it’s lunchtime on Friday at Galatoire’s, a New Orleans classic with stars in the kitchen, a Mardi Gras-sized sense of humor in the dining room and an overall feeling of warmth wider than a Santa Claus smile. 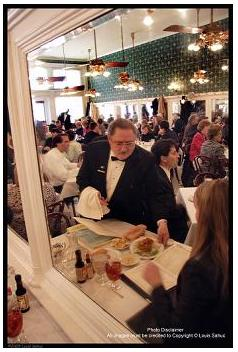 We’ve visited New Orleans many times, and we always try to schedule a meal at Galatoire’s; it’s a sensational restaurant, highlighting simple fare, elegantly prepared with a memorable touch on seafood, fine service from a staff whose tenure may go back three generations. There are supposedly no reservations for the dining room, though they’re taken for a smaller dining room upstairs, and a wait for a table — outside on the sidewalk of Bourbon Street — provides plenty of entertainment by itself.

But we’ve never been part of the Friday lunch bunch, when a wide variety of “yats,” as New Orleanians often call themselves, gather for lunch that may stretch into cocktail hour, and sometimes into dinner. There’s a way to spot them, too. Galatoire’s has a firm policy that men must wear jackets at dinner (a closet holds some you can borrow, the way Lindy’s in New York used to operate) but not at lunch, so the proof is visible in the dining room, if not in the pudding.

On our most recent visit, we arrived in the late morning and since we were staying in the Quarter, so we decided to walk the few blocks to see what was what. Plan B — always have a Plan B — was oysters at Felix’s, just around the corner. 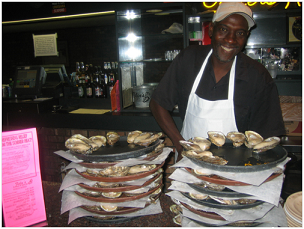 The line outside was rather short, but the entry hall was bustling with people greeting other people or talking to the maitre d’ and an aide who were disposing of questions and other would-be lunchers. We thought that being only a party of two would help our cause, but no such luck. “It’s going to be at least two hours,” he said, more gently than one might expect and, after a pause, he continued, “If you can be here at 5:15, I’m pretty sure we can find a table for you.”

Lots of oysters at Felix’s removed hunger pangs, and a couple of minutes before 5:15, with me wearing a jacket (but no tie) we returned. The maitre d’ smiled, welcomed us and led us to a generously sized deuce in the dining room left menus and departed. We saw many familiar items on the large menu, and when the server took an order, we started to ask about appetizers.

“Not yet,” he said. “Drinks first. Then we’ll talk about appetizers.”

That was the system, we recalled. One course at a time. Finish the course, think about the next, talk about it, order it. A perfect way to turn a dinner into a celebration, to have an opportunity to chat, to observe the people in the dining room, even to join in to a couple of choruses of “Happy Birthday.” We didn’t leave until nearly 10 p.m., comfortably filled but not stuffed. Several tables with six or eight diners, and no jackets, were eating and drinking until 8. 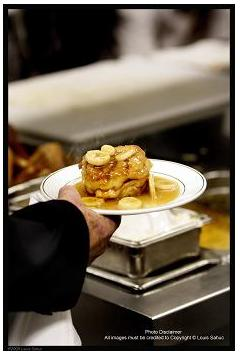 A Galatoire’s classic appetizer, fried eggplant and souffle potatoes bearnaise, brought potatoes fried, then re-fried until they puffed up with air. Succulent. The eggplant was feather-light and the bearnaise was in the French style, a bit lighter on lemon and tarragon than some versions. Sweetbreads, sliced and sauteed in their buttery pan juices, then topped with capers and served on toast points, were perfectly prepared. A Platonic Dish, as Richard Collin, one of the great New Orleans food writers, would have said.

Oysters en brochette, lightly breaded and alternating with bacon on the skewer, were an elegant delight, and soft-shell crabs, large, again lightly battered, were juicy, flavorful and heightened by a rich brown butter sauce. For an extra New Orleans fillip, we ordered a side of spinach Rockefeller, the sauce carrying a light anisette note, the dish rich but not creamy. An elegant and exhaustive wine list offered a Bonny Doon California Albariño and a rose that Joseph Bastianich imports, both by the glass and both eminently satisfactory.

Desserts are equally tempting, but restraint gained a partial victory and we split a fluffy, moist, brilliantly prepared bread pudding with a banana praline sauce. Strong, hot, aromatic coffee was the final touch to a meal at the very highest peak of satisfaction.

– Joe Pollack has been writing and talking about sports, wine, food, entertainment and other happy subjects for more than 50 years for newspapers, radio and TV stations, magazines, newsletters, blogs and other means of disseminating words and opinions. He has children and grandchildren scattered throughout the world and a wife, Ann Lemons, who is a good writer and an even better cook. He writes at www.stlouiseats.typepad.com.