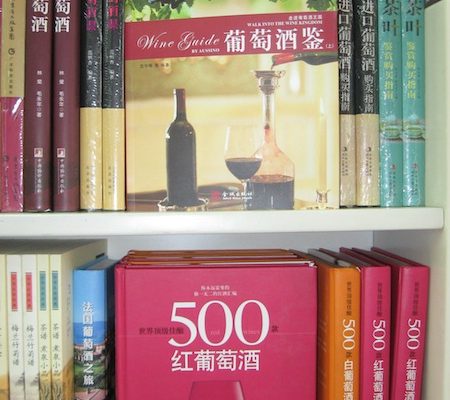 Wine books at a bookstore

A new sophistication about wine is emerging in China, where only a few years ago it was common to see people at banquets mixing Coca-Cola or Sprite with their Great Wall red. At first Chinese wine drinkers gravitated to status purchases of wine from the great châteaux Bordeaux, but now a more diverse group of wine enthusiasts is embracing a wider range of wines.

“Wine is hot in China,” Matthew Lance, manager of the Aria Restaurant in the five-star China World Hotel told me in Beijing. According to Vinexpo, wine consumption in China grew 140% in China from 2006 to 2010 and by 21.5% in 2011 alone. Today China is the fifth largest aggregate consumer of wine worldwide, after France, the United States, Italy, and Germany.

The prestige drinkers—mostly middle-aged males—continue to have the deepest pockets. Wine Intelligence reports in China Portraits, their August 2012 study of the growing segmentation of the Chinese wine market that this group accounts for 40% of money spent on imported wine in China, though they make up just 22% of wine drinkers. Instead of drinking Chinese baijiu—the fiery, skin-permeating, 80 to 100 proof grain alcohol traditionally consumed in large quantities at work-related banquets—now the well-heeled businessman will say “ganbei” [bottoms up] and drink shots of Château Lafite [easily translatable as shadou lafei in Mandarin] when he toasts his colleagues.

Nicolas Socquet, General Manager at Maison Boulud in Beijing, acknowledges that some Chinese guests quaff the most expensive wines in their ganbei toasts, but others come to the restaurant to explore new wines. For Executive Chef Brian Reimer, this is the most exciting part of the restaurant’s mission—trying to blend Chinese and Western cultures. And Maison Boulud, a French-inspired restaurant in the former U.S. Embassy building where Henry Kissinger met secretly with Chinese Prime Minister Zhou Enlai in 1971, is well placed to do so. To make their extensive two volume wine list more accessible, the restaurant departed from French tradition to identify the wine by grape rather than only by region, as is typical in other Boulud restaurants.

The great châteaux of Bordeaux have been highly successful in marketing their wines in China, but for new wine drinkers starting with the great vintages may not be the best approach. Paul Rochon, manager of Le Petit Gourmand in Beijing, which hosts a monthly wine-tasting event, compares wine education to martial arts training. “You need to start with the basics,” said Rochon. “If you miss steps, you can fall down too easily.” Rochon’s goal is to create a club where customers learn to know what they like. This means going beyond Bordeaux and exploring other regions of France, such as Languedoc wines, the focus of the most recent tasting, or to introduce wines that are relatively new to the Chinese market, such as Greek wines.

Wine education itself is an aspirational activity, argues Stuart Christie, Sales Manager of Pudao Wines in Beijing. Unlike the prestige drinkers who may not like the taste of the wines they select, Christie explains that the second wave of wine drinkers is much more diverse. They want to distinguish themselves from Bordeaux drinkers with their knowledge of other French wine regions, such as Burgundy, or wines from countries other than France. Increasingly women and young people are becoming interested in wine. A tasting of Dr. Loosen German Rieslings on a scorching July afternoon attracted a very cool crowd indeed and at least as many women as men.

At the bar I met a fashion and luxury goods blogger (Onlylady.com) who was taking photos of each bottle, which had been paired with a piece of rock from the wine’s terroir to highlight the connection with its taste. I asked the young woman, who blogs under the name Hua Bang Daidai, how she got interested in wine. She explained that in industries like hers—media and fashion—it is important to know about wine. No one would drink baijiu shots at work dinners in these fields. So she started learning from websites, wine dinners, and tastings and hopes to write her own wine blog to introduce wines to the Chinese public.

For many Chinese, the language of wine is a new form of inter-cultural communication and they are eager to learn about new wines and wine regions. Julia Zhu Director of Wines at Shenzhen’s Langham Hotel and the former host of a popular weekly wine club at the Hilton Beijing, sees her task as building “a common vocabulary.”  Foreign wine producers are more than willing to engage the next generation of Chinese wine drinkers. Although France still dominates the Chinese market, Australia saw its sales of premium wines soar in 2011.  According to Wine Australia, China is now the top destination for exports of Australian wines costing more than $7.84 per liter.  For Australia and other foreign wine producers, the booming Chinese wine market provides a welcome bright spot at a time of global recession.

[author] [author_image timthumb=’on’]http://palatepress.com/wp-content/uploads/2012/10/Liz-Wishnick.jpg[/author_image] [author_info]Liz Wishnick is an avid wine lover and Mandarin speaker who travels regularly to China for her academic research in Chinese politics, which examines how food, energy, water, and health issues influence China’s foreign relations. She has studied wine in many venues in New York City over the past decade and volunteered as a pourer at charity wine events. Fluent in French, she has visited vineyards in Bordeaux and Champagne in France, as well as in Hebei Province in China, and Sonoma, California, upstate New York, the North Fork of Long Island, and Virginia in the United States. She can be reached at ewishn@yahoo.com. (Photo by Sam Robertson)[/author_info] [/author]