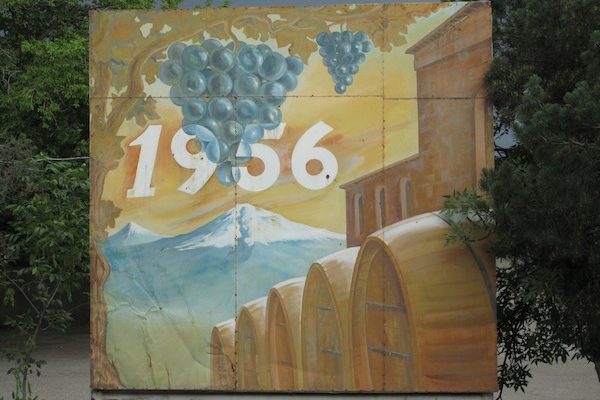 Arriving at night at an airport at the end of a journey, sometimes it’s hard to realize how remote a location you’re in until you start driving around the next day. This is what happened to me when I landed in Yerevan, the capital of Armenia, a few weeks ago. 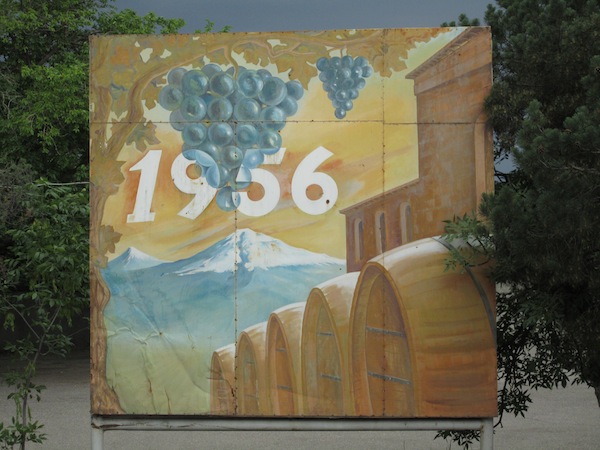 Armenia is a small landlocked country east of Turkey, in the Caucasus Mountains. It has been even less accessible for the better part of the 20th century for being incorporated into the Soviet Union in 1922 and locked up behind the Iron Curtain. But when the Soviet Union started to crumble in the early 1990s Armenia became an independent state, which has been both wonderful and terrible for Armenia.

Not being an economist, I can only judge Armenia by factors I know best: mainly wines and spirits. General observation shows a country split into three centuries: pre-industrial villages and farming; Soviet-era infrastructure, often derelict and crumbling; and splashes of 21st century in ubiquitous cellphone use and a capital city dotted with high end cars and fashionable people. Yerevan itself is at an altitude of 3,000 feet, and mountains figure dramatically in much of the country’s charming, dramatic, and/or primitive settlements and landscape. Vineyards are planted on high plains or hillsides in several areas of the country.

My purpose in going to Armenia was to learn about its great brandies. Oh, you didn’t know about them? Armenia has been making quality cognac-style brandies since the late 1800s. A merchant called Nerses Tahiryan started the Noy Brandy Company in 1877, on the site of a 16th century Persian castle in Yerevan. Acquiring a copper pot-still from Cognac, he hired an Armenian who had graduated from the wine school in Montpellier, France. The first cognacs were called “Fine-Champagne” and made in the same style as Cognac’s Fine Champagnes, but with native Armenian grapes. And it apparently turned out very well, as the distiller was able to source grapes with the right qualities for his “cognac.” 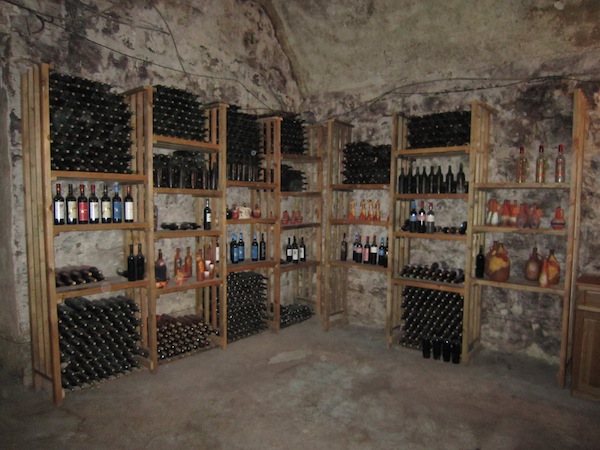 By the way, brandy is still called “cognac” in most of Armenia as they haven’t yet signed on to any agreement with Cognac, France, not to use the term. And it might be some time before they do. When the Soviet Union disbanded, Armenia was left without outlets for the goods it had been manufacturing for the USSR, as the newly-independent states were then free to source shoes and other goods from cheaper sources (such as China). Armenia, however, had been the chief supplier of brandy for this group of countries, and it still supplies them with a fair amount. With the word “cognac” signifying top quality, it’s unclear to me when the Armenian producers might convert to using the word “brandy.” (The Cognac situation is similar to Champagne’s: most people today ask for a glass of “champagne” when they mean any sparkling wine, anywhere in the world.)

Getting back to the Noy Brandy Company: the firm remained in business making wines and brandies through the Soviet era, until the whole factory was abandoned from 1991 to 2002. The company was then revived by private owners, and since 2004 has produced only brandy – though the old wines are still stored there in a cellar. It produces several different lines of brandies that sell well in Armenia, Russia and other nearby countries. 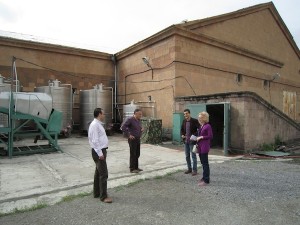 Noy is the Armenian name for the Noah, who many people believe to have landed his ark on Mount Ararat after the Biblical flood. The peak was once positioned inside pre-Soviet Armenia but is now in Turkey. The other big brandy company in Yerevan is called Ararat. It is currently owned by the French-based international spirits company Pernod Ricard. This is an efficient, very well-appointed facility, doing a wonderful multi-country business with brandies ranging from 3 to 20 years of age; 92% of the brandy is exported.

In terms of wine, there are people in several areas working on the wine industry. The chairman of the Armenian Union of Wine-Makers, Professor Avag Harutyunyan, has done an impressive amount of research on the terroir of Armenia—cataloguing soils, degree days and microclimates and other elements essential for anyone who wants to grow wine grapes in the country. 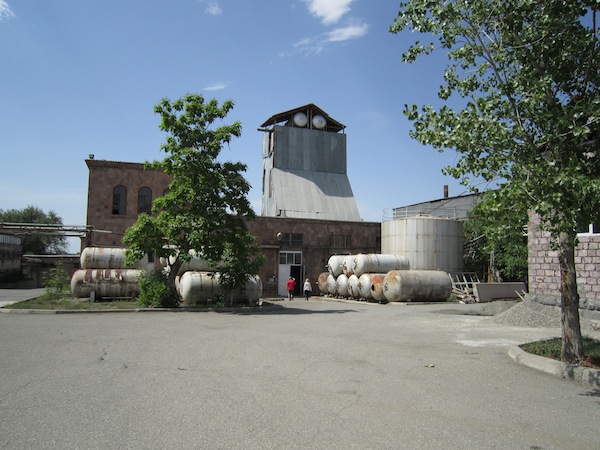 He and his son have also begun to renovate part of an abandoned Soviet-era wine factory where they have started their own company, Maran Wines. Using Armenian oak, they make dry and sweet wines, both red and white, pomegranate wine, as well as vodka. He is also working to change the (somewhat arbitrary) Soviet message that Armenia was only good for brandy production.

Several others are also working on this. One is international winemaker Paul Hobbs, who, with brothers Viken and Vahe Yacoubian, has “been involved with an Armenian project which has devoted considerable time to identifying the native grapes. This year we are planting an 18 acre parcel at 1,400 feet in elevation in the Aghvenadzor region.” His message to me concluded: “It is a thrill to be involved in the early stages of Armenia’s viticultural renaissance.”

Though I didn’t see this project, I did visit a small family winery in the same area. It is owned by Vahram Matevosyan, an important man in his village. His winery is adjacent to (and under) his house, where I sat down for a traditional afternoon meal of garden-fresh salads, vegetables, herbs, cheeses, homemade fruit compote and lavash bread with him and his wife. He makes traditional sweet and semi-sweet wines, as well as dry wines. He owns vineyards and buys grapes from other growers as well, and exports mainly to Russia and Ukraine, though at times he has gotten some of his wines into Europe and California. These wines are more in a “traditional” style, meaning they are mainly not the dry wines a Western clientele would expect. 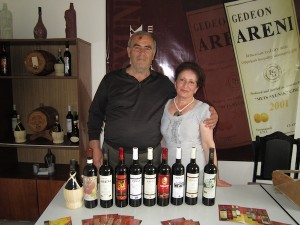 Going out from Yerevan in the opposite direction (west), I also took a day trip to the Armavir area, specifically to Armavir Vineyards, which has an international group of winemakers working at its 400-hectare site. Originally, most of the grapes planted here were “cognac varieties” that were sold for industrial production. This is gradually evolving to wine grapes that are vinified in modern production methods on the property. Grapes are hand-harvested here, because of tradition, available manpower and, I suspect, lack of machinery. This winery is owned by an Argentinean-Armenian industrialist, and his winemakers also treated us to a lovely traditional Armenian lunch with fresh salads, meat and cheese dishes breads and herbs. (Though I later noticed the young workers who came into the dining room had a range of dry cereals for their snacks, just like young people in the West.) 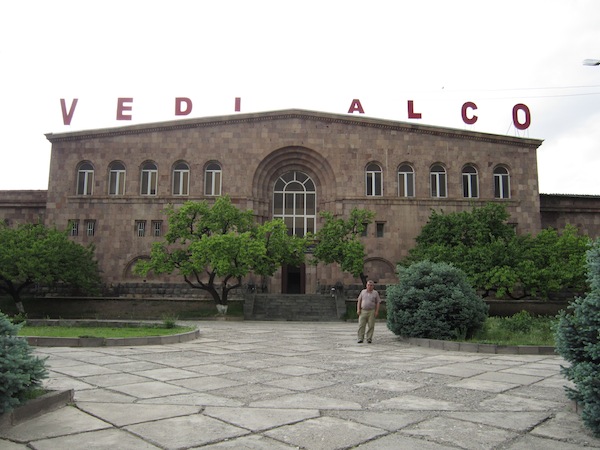 As a contrast, the Vedi-Alco company tugged at my heart with its brave bootstrapping of an old Soviet wine factory, bit by bit. We tasted around a kitchen table set in the barebones laboratory—also set with a small offering of cheeses and breads for a snack. After the collapse of the Soviet Union, they didn’t know how to sell their brandy, so they made cheap vodka for a while. Now they make brandy mainly for the Russian market, and fruit vodkas. With their new line of wines, everything from last September’s harvest was already gone, so it looks like if they can improve production numbers and methods, they may finally be on an upswing.

Still another company, the Proshyan Brandy Factory located on Yerevan’s outskirts, was most impressive in its display of sophisticated offices and industrial-scope production. With a wide range of brandies, wines, spirits and preserves—and some great lifestyle videos online—this group was obviously backed by wealthy owners who are finishing up a new building with even classier headquarters. These are the people who also offer their brandies in exotic glass containers like swords, bulls, fish, lions, tigers, and dragons. I got a bottle with a glass rose inside—for ladies.

Armenia’s story is that it is the first place wine was made, over 8,000 years ago. This claim has gotten some credence by very recent finds of ancient fermented grape residue in clay vessels. However, it’s the same claim that the neighboring country of Georgia has been successful in disseminating. I can’t, at this point, imagine a joint Georgian-Armenian wine alliance, so it will be interesting to see how Armenia will get its message—and its wines—across to the rest of the world.