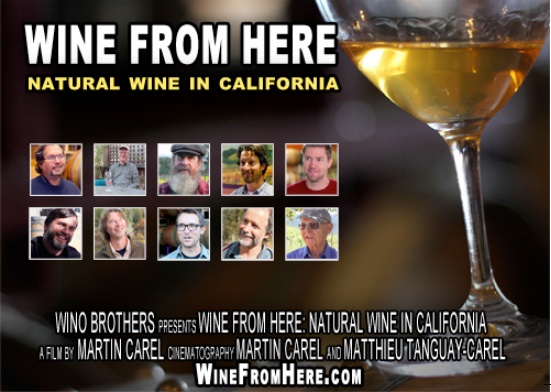 Interview topics range from irrigation to the use of chemicals in viticulture to additives in wine to the expression of terroir. “Chemicals” is a word that comes up a lot in a pejorative sense without explanation (with the exception of sulfur, see below) as to why any chemicals would be used in the first place. One conclusion that many interviewees draw is that any additions to grapes or wine interfere with the expression of a wine’s sense of place.

The language used is typical of the movement: “ecosystems,” “harmony,” etc. It is very romantic. Clearly these winemakers are passionate about what they do, and whether you agree with them or not, it is certainly enviable to feel so strongly about something. Hank Beckmeyer of La Clarine claims that they do not spray anything on the vineyard. Incredulous, I researched this and according to La Clarine they have had to spray with sulfur only once in the last four years, which is very impressive.

Things can often be inconsistent, though. Growers talk about adding nothing while drip irrigation tubes are shown in the vineyard shots. Winemakers talk about the overuse of oak while being filmed in front of mountains of barrels.

In one segment, the interviewees talk about the addition of sulfur (sulfur dioxide or sulfites), discussing the merits of sulfur-free and minimal sulfur wines. Numbers like 2-20 ppm (mg/L) are bandied about while it is mentioned “industrial wines” can have on the order of 200 ppm. Never mind the fact that adding 2 or even 20 ppm of total sulfites is almost as useless as adding no sulfur at all, since the oxygen in the headspace will rapidly offset the effect of that amount, consuming anywhere from 15-30 ppm of free SO2 in the first few months after bottling1.

Hearkening back to statements that natural wine is the best expression of terroir, the filmmakers set up a blind tasting of some California natural wines with a panel of “experts” (with some interviewees) to see if they could identify the respective individual terroirs. I will not spoil it, but if you are familiar at all with blind tasting, you will not be surprised by the outcome. It is not exactly the Judgment of Paris. However, bear in mind that one tasting with five people is not remotely conclusive.

The film is a good introduction to the tenets of the natural wine movement for consumers who are not familiar with the concept (probably a lot). It will likely resonate with foodies, who will identify with calls for less processing and knowing the origins of their food. It is earnest in its pursuit of understanding the movement and the people behind it and the viewer feels as if he is undertaking this journey of understanding with the filmmakers. Interview segments are bookended by short montages of the winemaking process which reminded me of certain segments from Mister Rogers’ Neighborhood (remember the crayons being made?) and could probably stand alone as a lovely short film. The John Williams (no, not that one) guitar tracks in the background give a nice, folksy feel to the whole thing. From a technical standpoint, the film is very well-made and well-edited and the Carel brothers should be proud of their work.

However, for those who are familiar with the debate, a lot of the content will be old hat. Hardliners from both sides of the issue will likely remain convinced of their positions or even become more entrenched in their views.

The concept of “the Other” factors strongly into most of the discourse. That is, the wines of the movement are constantly being compared to “industrial” wines. Coturri seems to revel in the counterculture to the point of being annoyingly repetitive. Constantly referring to hyperbolic terms like “chemical viticulture” and “hazmat suits” raises the question of whether the natural wine movement is defined by what it is or by what it is not. Could the heroes of natural wine exist without a faceless industrial bad guy?

Donkey and Goat winemaker Jared Brandt has one of the most reasonable quotes in the film. Talking about tradeoffs between chemical herbicides and diesel fuel usage, he states, “I don’t think it’s as clear cut as people think it is.” Indeed, the issue is more complicated than a one-hour film could possibly resolve.

Wine From Here: Natural Wine in California is not widely distributed (yet), but there is a public showing in Los Angeles this evening, September 22. Information about the film can be found on the website: http://winefromhere.com/

Wine From Here – trailer from WinoBrothers on Vimeo.