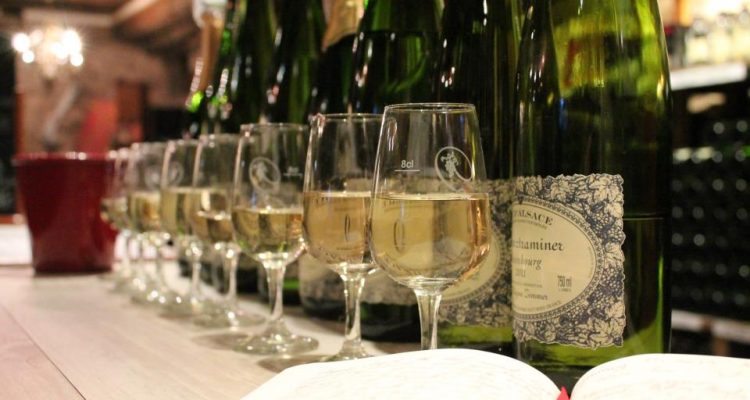 Alsace: Getting Away – and Bringing some Back

I first discovered wine at the tender age of nineteen on a trip to Italy — ostensibly to learn how to sing. I spent that summer learning more about Umbrian and Tuscan reds than I did about singing and have been spoiled rotten ever since. It is a terrible thing to be a young musician and a wine snob, but I do the best I can.

I moved to Germany a little over a year ago for a variety of reasons. My glib but honest answer when people ask (and they always ask) is “halb für Karriere, halb für Liebe” (half for my career, half for love), and they all nod knowingly. Anyway, one of the unexpected and totally awesome benefits of this move is that I now have access to lots and lots of fabulous wines. At surprisingly affordable prices. All the time.  My partner (half of the equation) thankfully shares my obsession.  A gifted clarinet player, Doug was born in Massachusetts and moved here about eight years ago, largely for the same reasons I did.

Recently, I surprised Doug with a Christmas/birthday/Valentine’s gift of a trip to Alsace for the express purpose of exploring the wines of the region. (Because separate gifts for all of those occasions would be too hard — I’m a terrible person!)   This is what we discovered. 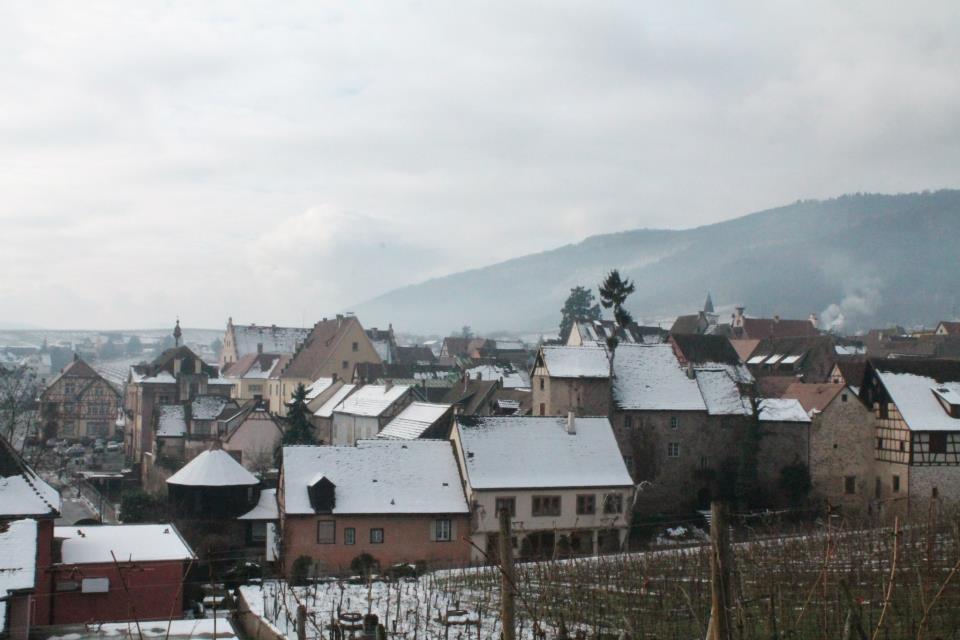 Alsace is a postcard of rolling vineyards, medieval castles, Renaissance architecture and cheerful, multilingual people nestled comfortably along the feet of the Vosges Mountains.  Its wine route wends its way through vineyards and picturesque villages, each of which features at least a few wine cellars or tasting rooms, often where you can talk with the producer him- (or her-) self as you sample the wares.

The region is probably best known for its Riesling and its dry, bubbly Crémant which is most often made with pinot blanc, though also occasionally with pinot gris and pinot noir — as well as chardonnay.  They also grow sylvaner, muscat and gewurtztraminer here.

If hiking the entire Route du Vin of Alsace sounds too intimidating, the ancient and charming town of Riquewihr is a great jumping-off point for a more leisurely wander along sections of the Perles du Vignoble footpath leading through the vineyards and other tiny, impossibly quaint villages in this lush region. There is something very special about trying a wine and knowing that you strolled through that very vineyard just moments ago, breathed in the scent of those grapes, that earth.

So many cellars, so little time! Though we limited ourselves to cellars within walking distance and managed to try 61 different wines from five different vintners in the course of two and a half days, we barely scratched the surface. Overall impressions: I was most struck by how characteristic the wines of this region are.  While they each have their own personality, certain things seemed to characterize most of the wines we tried. If you haven’t been to Alsace, but you know these grapes from other regions, this is what the wines taste like here.

Here are the wines that impressed us enough that we took them home, even though we (foolishly) did not bring an extra suitcase, making it quite an ordeal to transport them, even traveling by train. Unfortunately, other than Hugel et Fils, you probably won’t be able to find most of these in the States, but I think they all deliver internationally.

This is a small-to-mid-sized vintner, producing about 50,000 bottles a year. It was specifically  recommended to us by a friend who happens to be French — and a sommelier.  After our visit, Régine Zimmer herself friended us on Facebook.  Most wines are on the floral and fruit-forward side.

Rentz is another fairly small vineyard and it is dedicated to Viticulture Raisonée, which means they work very hard to respect and maintain the character of the earth, the people who farm it and the environment in general. Despite a family history going back to 1785, it feels very new with a bright, modern tasting room and many of the wines also taste kind of… new.

Probably the biggest, best-respected and most well-known vintner that we visited, their website boasts, “Hugel production averages 110,000 cases per year, of which around 90% is exported to more than 100 countries worldwide, where ‘Alsace’ is often synonymous with ‘Hugel.’” They have a long and dignified tradition—nearly all of the wines are a cut above, but you pay a premium for many of them!

This tiny, family-owned company has only been around since 1966 and they are a little off the beaten path, but they are worth seeking out for their fantastic values if you’re like us and love good wine on a budget. In general, they favor a fairly tart, dry aesthetic and their wines are hit-or- miss, but they’re all very reasonably priced, which makes the hits noteworthy!

Like Hugel et Fils, this is a larger (for Alsace) vintner with a long history in the region, and while they don’t specifically claim to follow Viticulture Raisonée, their practices are very similar. We found their wines also had a very tart and dry aesthetic with the addition of lots of minerality and citrus flavors.

[author_info] Bethany Barber and Douglas Metcalf are American-born musicians currently living, working, performing and drinking wine in Cologne, Germany. While neither of us could be described as a “wine professional,” we love, respect and enjoy great wines and an embarrassing percentage of our meagre salaries goes towards our “wine habit.”