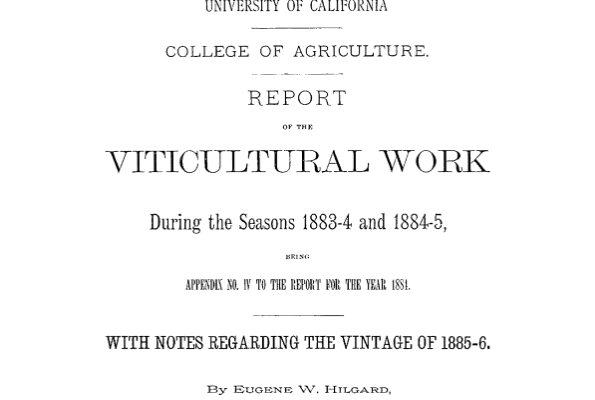 In 1880, Dr. Eugene Hilgard asked the California state legislature for $3000 to start a wine research program at the University of California, and he got it. His first start-up – the “California Agricultural Experiment Station,” now transmogrified into the University of California Davis’s massive agricultural extension program – had only been running for five years. At the time, Hilgard was the professor of agriculture for the entire university and, thus, the state. (Today, Davis’s College of Agricultural and Environmental Sciences has 330 faculty and over 1000 graduate students.) In wine science, 1880 is more than halfway to ancient. Pasteur had only demonstrated that alcoholic fermentation is about yeast reproduction in 1857 (though, to be fair, we had strong inklings before then). Wine has been around for some 7,000 years or so and we’ve surely been trying to make it better for nearly as long, but enology as we know it has really been the product of the past century or two.

In 1880, no one knew about resveratrol. There were no mass spectrometers or liquid chromatography to study specific wine molecules. The whole field of modern genetics, with its abilities to engineer yeast and decipher variety lineages and understand vine diseases, didn’t even exist yet. So, what did a wine scientist do back then?

Make wine, mostly, and judge whether anyone would want to drink it. Hilgard – who, incidentally, was a soil scientist (the first real soil scientist in the US) and not a wine specialist at all – took it upon himself to scientifically figure out which grape varieties were worth growing for California wine. And where they could be planted. And what winemaking techniques were suitable. And how the end products could be expected to taste. California could grow great grapes; that was abundantly clear. But great wines came from Europe. What did California need to do to make European-style wines?

Really, that was the starting point. Hilgard’s system for classifying grape varieties relied on where they found their traditional European homes. He divided the whole of California into two viticultural regions: coastal, and non-coastal. By the 1920s, when his successors were beginning to feel as though they had a handle on his insanity-inducing research project, they’d realized that those probably weren’t the most useful starting assumptions and instead outlined five “climatic zones” with a footnote that future researchers might somehow find a way to make more. Instead of referencing European growing practices, they’d decided to classify wines by their quality characteristics: from reds and whites with specific varietal character (like zinfandel and barbera or muscat and chardonnay) to those without but still of “general bottling quality” to those not worth bottling but presumably suitable for plonk by the barrel.

What they did looks rudimentary from today’s vantage, but it’s a fallacy of popular history that our ancestors were stupider than us. They weren’t. Wine lovers are less inclined toward that mistake than most, since it’s hard to rhapsodize over the elegant produce of our forefathers and simultaneously deride them as ignoramuses. Still, we’ve clearly come a long way. California is now officially subdivided into 130 American Viticultural Areas (AVAs), and in our post Napa-boom era we know that the state doesn’t need to compare itself to Europe to find a place at the connoisseur’s table.

Except that those 130 AVAs may not really be useful: to wine drinkers, to marketers and salespeople, or to researchers. And Hilgard was further ahead than we might guess in realizing that California wines couldn’t and shouldn’t aim for European mimicry. In his report for the State Viticultural Commission in 1885, his conclusion was this:

“[If] the wines of California must in the main seek their market outside of the State, and must therefore be adapted to shipment to long distances; then it follows that, if we adopt the wine-making processes of southern France, Portugal, and Italy, we must adopt the all but universal practice of fortifying export wines. If, on the contrary, we wish, in our climate, to produce also wines similar to those of Bordeaux and northward to the Moselle, we must of necessity so vary our practice that with grapes of a more or less southern character we may nevertheless be able to impart the characteristics of the cooler climates to our products. To this end we must distinctly deviate, in some respects, from the exact practice of either the southern or northern region of Europe.”

Overambitious or not, Hilgard’s grand project to map California viticulture probably saved us from a lot of strange and boring wines. By 1925, his successors could conclusively recommend that growers avoid “Bambino bianca, Clairette blanche, Feher Szagos, Green Hungarian, Hibron blanc, Hungarian Millenium, Kleinberger, Malmsey, Marsanne, Mathiasz y-ne, Mourisco branco, Muscat Pantellana, Muscat Saint Laurent, Nasa Veltliner, Nicolas Horthy, Palaverga, Pavai, Roussette, Saint Emilion, Sauvignon vert, Selection Carriere, Steinschiller, Terret, Vermentino Favorita, and Vernaccia bianco,” and those were just the whites deemed “so devoid of merit that they cannot be recommended anywhere in California under present conditions.” Their failings were varied: too disease-prone, not enough acid or sugar, ripened in inconvenient ways, or just plain boring. “Petite verdot [sic]” earned a spot on the reds-not-recommended list for producing only “a standard though slow-maturing and rough wine,” not being very productive, and sunburning too easily. With that exception, their judgments have held remarkably true, even if they were making their test wines by pulverizing the grapes between rollers and yanking the stems out by hand. Part of why no one grows picpoul noir in California might be that their 1925 report recommended against it, but when their description reads that “the wine, however, lacks almost everything except alcohol, acid, and body” without “even sufficient character for bulk pink wines,” it’s hard to feel as though we’re missing much.

For creating tables of worth-it and not-worth-it varieties, five functional AVA-equivalents seemed to be enough. But, even if those tables are still useful, and even if they were adequate at the time, they’re hardly adequate now. A major concern for the California grape industry in the early 1920’s was railroad capacity: grapes were literally rotting in the vineyard because too few railroad cars were available to cart them cross-country for winemaking in eastern states. Another project undertaken by the state viticulturists involved trialing preservatives to keep grapes fresh longer in transit. They concluded that sulfur dioxide, applied either by burning it inside the rail car or by submersing the grapes in solution, worked pretty well; boric acid, formic acid, and formaldehyde, on the other hand, didn’t. So, let’s just say that some of their winemaking concerns just aren’t relevant anymore.

Granted, some of them are. Hilgard saw not letting grapes hang to “’dead ripe’ as is usually done” as a probable solution to the “excessive headiness for which California wines are thus far noted.” He complained that vintners ignored that suggestion because, he thought, they remained too trapped in the European mindset equating more sun with more quality. In 1944, Davis scientists noted that this was still an issue, “and consistent neglect of the importance of harvesting at the proper stage of maturity causes many of the ills of California wines.” The existence of In Pursuit of Balance and the rest of the Lower Alcohol, Please movement suggests that not much has changed on that account.

Today, wine science can look more like CSI than like winemaking. Sunblock is still an important article of lab equipment, researchers generally get out into the field to collect their own samples, and many grow their own grapes or make their own sample wines, too. Nevertheless, a lot of work happens inside, in windowless rooms humming with fume hoods, cluttered with a panoply of glassware and grey-boxed analyzers, turning samples into tidy rows of numbers suitable for a feature position in a scientific paper entitled “The role of X in Y under Z conditions.” It’s easy to look at those papers and wonder what they have to do with growing good grapes or making good wine in real, practical terms.

At heart, though, wine researchers are still working on Hilgard’s grand project: what grows where (and how), what winemaking techniques work well (and why), and what flavors we can expect at the end. 134 years later, we don’t have it all figured out. Do we know which grape varieties are ideally suited to each Californian wine-growing region, let alone Oregon and Washington and Ohio and Nebraska? Do we have a good handle on what geographic subdivisions make sense? Can we tightly link winemaking practice and how a bottle tastes ten years later? And how many regions do we need to guide useful variety–terroir mapping? If Hilgard’s ghost asks, tell him that we’re still working on it.