Wine Competition: For Whom the Medals Toll?

Four judges taste a wine. One thinks it’s gold-medal worthy. Two say silver. One says bronze. What medal does this wine get?

If you guessed “gold,” you have probably sat on a wine jury in the United States.

This nearly happened on my jury earlier this month — and I felt like Dr. Doom for refusing to bump up my rating for it to take that gold, after two other judges did.

Who is the true customer of a wine competition? Is it the winery that enters, or the consumer who sees the gold medal?

I have been struggling with that question all year. I’m scheduled to judge 5 competitions this year, three in Europe and two in the US.

Europe vs the US 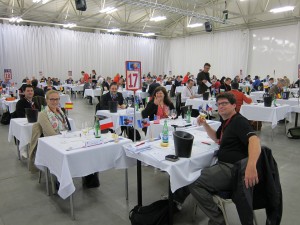 In Europe, the answer is fairly clear: the medals are supposed to be reliable markers for consumers. The OIV has established rules for judges to try to make a subjective pursuit as objective as possible.

But in the US, most wine competitions are like the Special Olympics: wineries get medals for showing up. And the more medals a competition gives, the more successful it is.

The biggest competition in the US is the San Francisco Chronicle wine competition, which received more than 5,500 entries in 2012 and awarded medals to more than 80% of them. Wineries pay for each entry, so 5500 wines earns a nice profit (the Chronicle is only a naming sponsor, which is a shame because the newspaper could use the money.)

The Chronicle competition gives out so much hardware that it manages to call 110 wines “best-of-class” even though it has only 101 categories. Did I say “only?” Could you divide US wines into 101 categories? It helps to have nine categories for Cabernet Sauvignon, eight for Chardonnay and seven each for Merlot, Pinot Noir and Zinfandel.

But it’s not just wineries that love the Chronicle competition: the public loves it too, as an annual tasting in San Francisco of some of the 4,644 medal winners (in 2012) sells out.

I have judged at the Chronicle competition, but not in several years. I’ve been spoiled by judging only in the European style for a while, in which you make your decision and let the statisticians sort it out. The exception is Critics Challenge, where you have to write publishable notes for each wine you give a medal, thus giving you personal responsibility.

I had almost forgotten what most US competitions are like. Then I agreed to judge at this year’s California State Fair competition.

I couldn’t resist the draw of history. The state fair competition was important in helping the California wine industry grow before Prohibition (it started in 1854) and rebuild after Prohibition. At a time when few took California wine seriously, it was a way for small wineries to get a PR boost. Maybe that’s how the whole culture of winery-interests-first competitions started.

Recently the California State Fair competition had become an embarrassment for the entire concept of wine judging.

Charles Shaw won best Chardonnay at the state fair in 2007 with a wine that was apparently created just for the competition. “The characteristics that we look for in our gold medal winner … a nice creamy butter, fruity … it was a delight to taste,” judge Michael Williams told ABC News. The award validated Two Buck Chuck drinkers in the idea that there’s no point in spending more than $3 for a bottle of wine.

Then, in 2009, retired professor Robert Hodgson published a study of the California State Fair showing that only 10% of the judges were able to give consistent ratings to the same wine. That study is still being cited by people who want to attack wine experts and even wine itself.

Two good journalists, Mike Dunne and Rick Kushman, took over the California State Fair competition this year. That’s why I agreed to judge. I wanted to see what they could do to restore its integrity.

I don’t think they’ll invite me back, and not only because of this column. And I’m not sure I should go back. I might go into diabetic shock if I have to judge another group of supposedly dry Zinfandels or Petite Sirahs. Here’s how sweet they were: When I got home, I craved root beer. I drank one, and it was drier than about half those wines.

Tasting these, one after another, led me into one of the many internal debates I had during this competition. Is this the kind of wine US drinkers want? Shouldn’t I reward wineries for pleasing the public?

In Europe, sweet red table wines labeled as dry would get no medal and a round of grimaces. In Sacramento, I was accused by a fellow judge of having a European palate. But I like fruit flavors in wine. In fact, I think that’s why I get invited to Europe to judge — to represent the American palate. Now I feel like a man without a country.

Wine after wine, I said “no medal.” One of my colleagues runs three US wine competitions. He thought about 80% of the wines deserved medals, which seems to be the US standard. And he kept expressing disgust, politely, with my penuriousness. Once, in the Pinot Noirs, we argued outright, on my core issue.

“You’re judging these wines against the entire world of Pinot Noirs,” he said.

“Yes I am, because when people go into a wine shop that’s how they judge these wines, not just against the 35 wines we have today,” I said.

We didn’t argue the point anymore, but my panel kept actively trying to find gold medal wines. The discussion that I started this column with was typical. Nobody, ever, adjusts their judgment downward. What happens is that judges trade votes: I’ll give a gold to that wine you like if you give a gold to mine. I wouldn’t play that game, and thus my panel ended up unusually parsimonious.

It needs to be said that the California State Fair, in part because of its reputation of rewarding wines like Two Buck Chuck, got more than 2700 entries, but does not get the best wines in the state. Wineries big and small enter their wines hoping to get lucky with generous judges, and often succeed. If these were the best wines California could make, I would break down and cry and move to Oregon.

The State Fair ended up giving 218 golds, about 8%, far fewer than the Chronicle, which gave 18% combined to best of class, double gold and gold. Only about 34% of the wines entered in the State Fair competition earned some kind of medal. This is very close to European standards, and a nice first step toward restoring public trust.

Maybe next year, the following scene will not happen again. 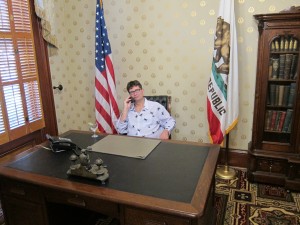 One evening, the judges were invited to the Leland Stanford Mansion for a gala dinner. This is where the governor of California meets visiting dignitaries, including the president of Mexico. In fact, I got kicked out of the governor’s chair, unfortunately before I could pass any legislation.

At the dinner, medal-winning wines from the 2012 competition, the last under the old regime, were served. Fortunately many of the judges are winemakers who also brought their own wines. I drank the heck out of an Andis Amador County Semillon brought by judge/winemaker Mark McKenna. Judge/winemaker Amy Butler brought a nice Ranchero Cellars Paso Robles Viognier.

Meanwhile, the wines that had medal stickers on them — gold, silver, bronze — sat on our table, 3/4 full at the end of the night.

We expected to drink red wine with the main course, but it turned out to be white wine food (pork with red pepper sauce, and chicken with rice). So I grabbed the only unopened gold medal-winning white wine, a Chardonnay. A few people, including me, tasted it but nobody would drink it.

But nobody would blink at giving a wine like this a gold medal.

Which brings me back to my question: who are wine competitions for? The winery that got the gold medal for that Chardonnay is one of the largest in California. Giving the winery that medal makes it happy and keeps entries coming in.

Maybe consumers won’t have the same fussiness as we did at dinner. Many consumers will drink pretty much anything in front of them. Maybe it makes them feel better to buy a $7 wine that won a gold medal. Maybe it’s all about validation.

Maybe I should have just said about the wine at the top of this piece, OK, give it a gold. I feel like the judge in the Special Olympics who says, “Sorry, you’re just not that special.”