Terroir: Do We Have Evidence?

At this point, its reasonably common knowledge that terroir isn’t all about soil. Studies since the 1970’s have told us that wine from grapes grown on different soil types in different locations don’t necessary taste different. Nouveau chic wine critics – Steve Heimoff, Eric Asimov, W. Blake Gray, among others – have announced that they don’t really buy the terroir thing, that they can’t taste the differences they’re supposed to taste between one side of a hill and the other. [Mr. Asimov has questioned the use of “terroir” to describe a scientifically measurable difference in minerals from the earth, but acknowledges the existence and importance of terroir, describing it as “the interaction of the vineyard, the climate and the people who made the wine.” -Ed.] But a lot of us (accusatory finger pointing straight at myself) still feel as though we can indeed taste a difference in wine from vineyards full of galets (big, white, French cobblestones) versus an alluvial plain. To make things more complicated, terroir often carries the weight of much politicking, perhaps because place carries so much value in wine marketing (if place doesn’t influence flavor, then why are we paying more for the ritzy neighborhoods?) or perhaps because wine lovers will happily create vitriol wherever differences of opinion allow. 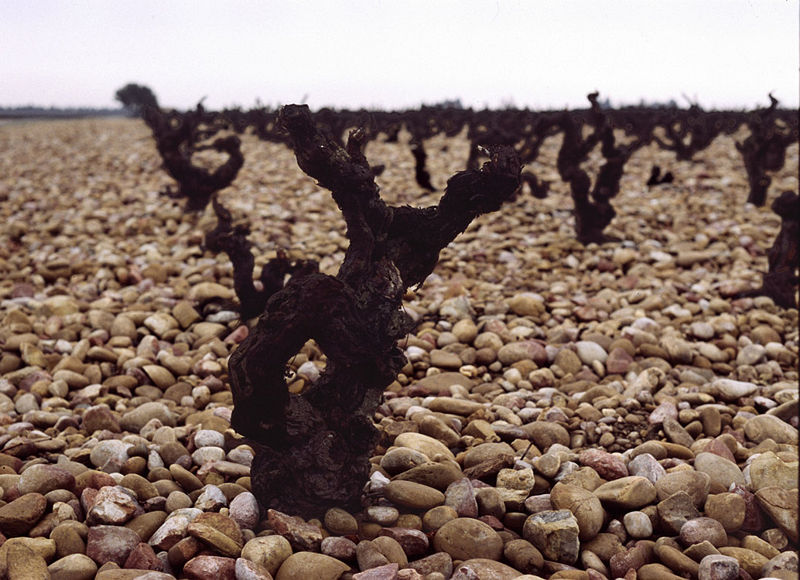 The foremost question to answer is whether we can taste terroir – or, perhaps even more importantly, whether we can convince anyone and ourselves that we can taste terroir. But the other obvious question is whether we can attribute to terroir a measurable chemical difference between wines grown in different places. Which is more important – that a chemical difference exists or that we perceive a difference – is a philosophical question and one on which I’ve yet to decide my own position. But life rarely waits for philosophical questions, and a lot of business rests on terroir being real. Recent debates have left plenty of wine lovers questioning whether it really is. At this point, evidence – any evidence – conclusively proving one stance or the other is exactly what we all need. And, thank goodness, there are scientists working on that.

Defining terroir is the first problem. The most important thing to say about terroir is that terroir isn’t just soil. Peynaud very elegantly defined terroir as “Mother Nature,” which gives a useful general idea but isn’t very helpful for a scientific research study. A working definition developed by the Institut National de la Recherche Agronomique (INRA) in 2005 talks about terroir as a concept that involves the interaction between human culture and knowledge and the natural environment, which means that terroir includes how we’ve decided over centuries what cultivars to plant where and other ways humans have adapted to nature. This definition is interesting, but still much too big to be useful for a research study. So, some studies try to deal with all of the different factors related to differences in place simply by comparing grapes grown in different regions. Others pick out specific elements related to place – type of soil, amount of sunlight or water, even local yeasts and bacteria – in an effort to not just say that grapes grown in different places are different, but to ascertain why they’re different.

Terroir isn’t just about soil by nearly everyone’s measure (those who think it is just about soil are plain misguided), but geology is still one of the more frequent elements of terroir that scientists choose to single out for dissection. Even still, geology isn’t just about rocks. What about how the shapes of landforms – topography – affect how wind blows and mesoclimates: which vineyards are a little warmer and which are a little cooler? Or how well the soil holds on to water? A major but frequently overlooked element of vineyard geology is how the assorted soil types make minerals available in different ways, since grapevines rely on the soil to provide about 19 inorganic nutrients. Clay, for instance, holds on to minerals and transfers them to roots exceptionally well, while soils based on granite are notoriously bad.

There are plenty of problems with trying to draw conclusions about wine flavor from these sorts of various vineyard qualities. One of the more celebrated elements of terroir­ – the way the soil looks at the surface – is important partially in terms of heat radiation, because whether the soil is dark- or light-colored, reflective or shiny (like those famous galets of Chateauneuf-du-Pape) influences how warm the soil gets, which influences ripening. But allowing native vegetation to grow, planting cover crops, or applying mulch – techniques that are all the rage these days – mitigate that influence. So, ironically enough, biodynamic farmers who employ these tendencies might be reducing the influence of their local terroir rather than increasing it as they generally advertise. And those great maps that show how (particularly French) vineyards correspond to different bits of bedrock rarely account for topography, which is huge both in terms of what layer of soil vines are interacting with and which direction a slope is facing. In other words, the maps aren’t nearly as useful a tool for explaining flavors as they initially seem to be.

These are thought-experiment arguments backed by solid scientific theory. When we look at studies measuring chemical compounds or quantifying flavors, we have different problems. Mostly, nothing is as clear-cut as we’d like it to be. A 2012 study trying to distinguish wines from three different subregions of Rioja using nuclear magnetic resonance was able to distinguish grapes from those three regions, barely, but couldn’t do the same with the finished wine. A 2004 study in Bordeaux found that, while the majority of variation in grape ripeness (measured by sugar content) could be attributed to grape cultivar, what soil type the vines were grown in was a pretty close second. But soil type had nearly no effect on grape pH and acid content. Huh.

The concentration of some key minerals – nitrogen, potassium, magnesium – depended on soil type but the amount of those minerals in the soil didn’t correspond to the amount of those minerals the vines took up, nor to how much of those minerals showed up in the ripened grapes. This is crucial: minerals from the soil don’t translate to minerals in the wine, and certainly not to mineral aromas and flavors. Nutrients taken up by vine roots aren’t evenly distributed throughout the plant, so concentrations measured in a leaf petiole (the tiny stem that holds onto an individual leaf where a lot of measurements are taken) will be different than concentrations measured in the woody part of the vine or in the grapes. Moreover, yeasts absorb some of these nutrients, which means that those nutrients are taken out of the wine when the yeast is fined or filtered out in the form of lees, so the concentration of minerals in a finished wine bears is even less related to the minerals in the soil than the concentration in the grapes was. Finally, we’re pretty sure that we can’t taste the tiny smidgens of minerals that do end up in the wine. Most of the minerals found in wine are always present in quantities below their detection threshold, that is, in smaller quantities than anyone can taste. The few exceptions – iron, magnesium, chloride, and sulfate – taste pretty icky – bitter or “off” – rather than like what we usually call minerality.

There are the studies showing that we can in fact show statistically significant differences between wines from different areas but these, too, have problems. For example, a 2012 study took a detailed look at the flavors in Cabernet Sauvignon from ten distinct geographical areas in Australia and detected statistically significant differences identifying each wine. But they weren’t able to control for different winemaking practices, so how can we tell how those differences came about? Now, if we take that broad INRA definition of terroir to include winemaking styles attached to a region, I suppose we can still prove something about terroir here, but I don’t think that’s what most of us mean when we ask these sorts of questions.

Now, it’s very possible that there are things going on here that we don’t yet understand – that we can’t measure or explain – that help explain how terroir manufacturers flavor. Maybe we’re not choosing the right wines, or we’re not looking at the right variables, or maybe we’re not yet even capable of detecting whatever it is causing the differences we (sometimes) taste. There might be a very good argument for the idea that terroir comes from centuries of vintners’ accumulated knowledge about where to plant what vines, a big problem when many studies of terroir are being conducted in regions like Australia or Ontario where winemaking doesn’t have a very long history. None of these studies proves anything about terroir. They can only point us in the direction of what isn’t happening.

I was recently sent a few very pleasant bottles of Assyrtiko from Santorini. The Wines from Santorini marketing website suggested that the wines should have “a pleasing mineral character derived from the volcanic soil it is grown in.” And both of the wines did, indeed, taste strongly minerally and a bit salty. I enjoyed that, and I enjoyed thinking about those sea breeze-swept vines growing in their crusty volcanic soil. But whether the flavors I enjoyed had anything to do with those breezes and that soil, or where those flavors came from? I’m pretty sure they didn’t.