Looking at Three-Tier from the Other Side

So you think the three-tier alcohol (wine, beer and sprits) wholesale distribution model is broken and you want to flush it? Read this first.

(In the interest of full disclosure, while I blog at night, I work during the day in the three-tier wine industry for a large company. My resume also includes working for small wine importers and as a waiter. Nobody asked me to write this. I am speaking up because you seldom see this is a point of view in the blogs. My only agenda – and it is a lifetime goal – is to help America become a wine-drinking culture.) 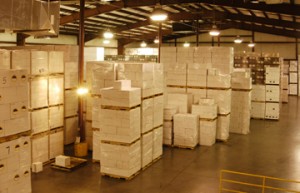 Imagine a city like Houston. It’s Dec. 3, and there are 64,000 cases of wine, beer and spirits waiting to be delivered that morning by one of the large distributors. But wait, with all the distributors in play, large and small, triple that number to 192,000 cases – not at all an unusual number for that city at that time of year.

Now imagine FedEx, UPS, DHL and the USPS delivering all those boxes, along with everything else they deliver. Keep in mind that anything going to a hotel or restaurant will need to be delivered at a specific time. And if any of those cases are going to a supermarket, they’ll be expected to arrive before 6 a.m. If beer and quality wine are on the trucks, the trucks will need to be temperature-controlled. More important in Houston are refrigerated trucks from May to October, but in some parts of the country, they’ll need to be heated. Do you think FedEx, UPS, DHL or the USPS is going to buy those trucks? Who’s going to pay for them?

Now imagine that scenario all through the month of December, when other packages, mail, etc., are being delivered. And imagine that happening in Dallas, Denver, Los Angeles, San Francisco, Chicago, Atlanta, Boston and all the other large cities in the US. Then imagine New York City, where you can multiply those 192,000 cases by a factor of 5. And that’s for just one day.

I know that many people who rail against the status quo aren’t advocating a complete overthrow of the current system nor would they really want to inherit the problems that would result from dumping it. But I hear a lot of irrational utterances on blogs and on the Internet that lead me to believe some of the ranters aren’t thinking this through.

Besides what I hope is the obvious logistics problem, here are a few other issues to consider.

When Jill Winelover reads about a wine and wants to get a bottle, she has several options. She can buy it at a neighborhood supermarket or wine store (which, in our culture of immediate gratification, is what most wine drinkers want to do). She can order it online (at this point in some states, not all) or she can order direct from the winery (also in some states, not all). Everyone who wants to order wine online ought to be able to do so, and I have no quarrel with people who want to work to make that come about.

But from a local perspective, if she buys online, the money leaves her community whereas if she buys from a store, a lot of the moneys stay in her community to pay things like salaries and wages of store workers, delivery people, local distributors and their employees. Any taxes accrued will be local taxes, benefiting her local state or community. The bottle of wine she buys is one of 12 in a case that were transported together to the store, saving on transit costs by making shipment more efficient.

If she buys from a local wine store, she’ll have the opportunity to develop a relationship with her merchant who can learn her likes and dislikes. This can also happen online with some software. It would not be a face-to-face kind of relationship. If Jill wants more of the wine, again, it’s a short drive from her house. And if the wine is flawed, it’s easy for her to return it and get a replacement bottle. Jill won’t have to hassle with repackaging sending it – after it’s been uncorked. The wholesaler, importer and producer will take care of that.

I have a writer friend who gets samples sent from producers on a regular basis. Sometimes it is a single bottle, sometimes a two-pack, three-pack even a six-pack or 12-pack. In each case, there is packaging. About half the time, it’s polystyrene foam that she can’t recycle. Now imagine tens of thousands of people getting their wine shipped to their houses. At a time when industries are trying to figure out ways to cut packaging and to create smaller carbon footprints, the packaging plus the fuel cost of shipping individual or small packages of bottles becomes staggering.

I know some people will say that we already get a lot of products delivered to our doorsteps this way. But a bottle of wine isn’t like a mattress or a painting that gets shipped once. It’s a consumable product that is replenished regularly. The current wholesale distribution system offers vast economies of scale with transport both to central (and temperature-controlled) distribution centers and to retail stores. A consumer can drive to a central location – a retail store – that has lots of options. And if she special-orders a wine which is at the warehouse, it’s delivered with a load of other wines, not as a single bottle, specially wrapped, in a single truck. But arguably, if that wine isn’t at the warehouse, she should still be able to order it from a winery or online store.

Bloggers commented recently about the amount wholesale alcohol distributors spend on political causes. A figure of $50 million has been put forth for spending by American wholesalers and their associations for state politicians from 2000 to 2006. I can’t vouch for the accuracy of that number, but I do agree companies spend, just as grocers and commodities groups and wineries and individuals do, to support/promote their interests.

What’s also true – and never gets mentioned – is the charitable spending these companies do. For example, Larry Ruvo, Senior Managing Director of Southern Wine and Spirits of Nevada (a division of Southern Wine & Spirits of America, Inc.), is founder of the Keep Memory Alive Foundation and the Lou Ruvo Brain Institute. Since its inception, Keep Memory Alive has become one of Las Vegas’ most important charitable initiatives and a key player in the nation’s fight against Alzheimer’s disease. Larry has helped raise more than $50 million and recruited leading specialists to become part of this vital project. He also spearheaded the establishment of the UNLVino wine-tasting, America’s largest single-day wine-tasting charitable event, raising millions of dollars for the students of the William F. Harrah College of Hotel Administration at the University of Nevada Las Vegas.

It’s not that I believe one somehow balances out the other, only that some blog entries have been one-dimensional and often simplistic in their observations. It’s often easier to track who gives what to politicians than whether someone’s doing some good in the world, and how much.

I know the three-tier distribution system is not perfect and often seems like a Paleolithic dinosaur to the average blogger or small business. I know its shortcomings better than most because I deal with them every day. And I know that rational folk are not advocating the total destruction of the current infrastructure.

But as I read the rants posted all across bloggerdom, I ask myself, “What’s in it for them?” Are people writing posts because they have commercial interests that are at odds with the current system? Are they writing something controversial to raise the traffic on their site? And as for disgruntled participants in the three-tier system, show me the industry that doesn’t have insider critics and lots of room to improve.

Whatever the three-tier system is not, it has the capacity to move enormous amounts of wine over vast and small distances economically, to move those wines quickly to retail outlets and consumers, and to keep a perishable beverage from getting too hot or too cold along the way.

I keep coming back to this: Do the rants do anything to bring more wine-lovers into the fold? Do they move the wine business forward? Do they follow-up with reasoned, practical solutions? Or is this just a case of shooting first and asking questions later.

— Alfonso Cevola, the Italian wine director for Glazer’s in Texas, has been involved in the selling, educating and advancing the cause of Italian wines since 1978. His  blog  is On the Wine Trail in Italy. He is a Certified  Specialist  in  Wine  and  a  Special  Contributor to the Dallas Morning News and Sommelier Journal. In recognition of noteworthy support of the wines of Italy in America, the Italian Trade Commission honored him with the Distinguished Service Award in 2009.