Live in BDX: A Hot Afternoon in Saint-Émilion & Pomerol, Party Time in Bordeaux

Before we began the day with our formal tasting, we all trooped over to Château Cheval Blanc.  It was, as usual, a media circus with the top wine critics from around the world shooting interviews with each other and with dapper, sophisticated winery manager Pierre Lurton—who we would later also see at the Château d’Yquem tasting—the other property he manages. 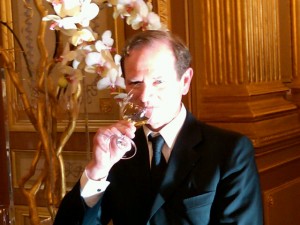 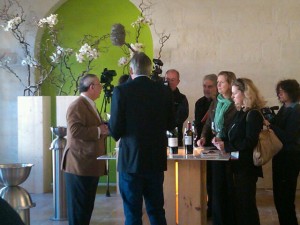 As always, there was much talk from famed French wine critic Michel Bettane (and others) about variations in bottle samples.  This time Michel gave me definitive instructions: do not taste from the top of the bottle, do not taste from the bottom of the bottle, taste from the middle.  And try the middle of the bottle on all the different tasting tables.  OK! I did it. Here’s the consensus: cherry aromas, floral, red fruit in flavor, with a touch of elegant herbs, especially in the aroma. Tannins feel fairly soft, though they are massive in color. That was the Cheval Blanc, and the Petit Cheval a close second.

We moved on to Château Larmande for our formal tastings of the en primeur red wines from of St.-Emilion and Pomerol. There, I found freshness and modernity in Château Pavie-Maquin and Château La Couspaude. Château La Tour Figeac is also tending towards a modern and pleasantly fruity style now.

Some of the finest en primeur samples I tasted so far this year were from the Châteaux La Gaffelière, Larmande and Larcis Ducasse.  Châteaux Clinet, Gazin and La Conseillante (a new favorite) showed great flavors, from fresh­blueberries to earthiness—big wines.

As the tasting proceeded, it got sunnier and hotter by the minute.  By the time lunch ended and we drove to St.-Emilion, it was full-on summer.  We spent the afternoon roasting in the car, and zig-zagging along country lanes, stopping to taste en primeur at various other châteaux.  We sampled Château Angelus (and its second wines), as well as  Châteaux Magdelaine and Belaire-Monange. 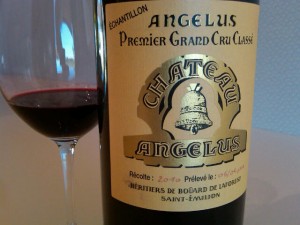 In some cases we re-tasted, and found the barrel samples somewhat different in their secondary characteristics such as aromas and finishes, but basically the same in quality, weight and depth.  Two that showed particularly well this afternoon were Château Daugay and Château Pavie.  A great, if wearing, afternoon came to an end all too soon.

This is the second year in a row that Pierre Lurton has held the Château d’Yquem tasting in the lovely Opera building in the center of Bordeaux.  The setup includes one station of bartenders dispensing 2010 Château d’Yquem en primeur, and another with a vintage wine. This time it was the classic 1988 Yquem.

In the 2010, a touch of citric elements did a great job of cancelling out much of the unformed sweetness.  In terms of fruit, grapefruit seemed to dominate in the flavors, with candied grapefruit peel in the finish. 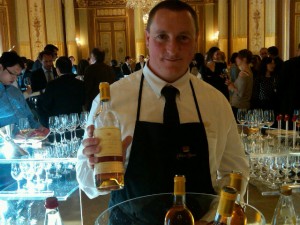 The 1988 Yquem was remarkably lush for a Sauternes that is 23 years old; many Sauternes of that age have left their sweetness, with flavors favoring of the dominance of dried fruit and minerality.  Not so here: this 1988 wine paired as well with the tidbits of sweetness (raspberry powder dipped marshmallows on tall sticks) as with the foie gras hors d’œuvres served during the reception.  There were also other imaginative mouthfuls to be enjoyed, such as maki of paella, sauced lobster bites on a spoon and fish tartare, created to enhance the en primeur wine, as well.

The future in finery

Later, we changed into our finery, have been honored to be invited to the annual dinner for the Commanderie du Bontemps for Medoc, Graves, Sauternes, Barsac.  Basically, this is where the négociants and worldwide distributors get together with the château owners  to drink, eat, and discuss the future.

I had the opportunity to do just that with Philippe Dhalliun, the director of Mouton Rothschild, whom I was seated next to. According to him, the luxury market will be keep growing in China for some time. But it will remain strong in the US as well, even if the American economy becomes the second largest on the planet—which will happen soon.  According to Phillippe, Mouton and the owners of the top Bordeaux château want to retain their relationships with the US buyers both because they have patience, and because they respect the long-faithful small (top) market in the US.  A lovely thought.