The Wines of Texas Are Upon You 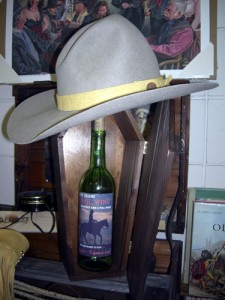 And they were—some excellent, most good, a few not up to par—during a recent weekend wine event in Dallas. The Texas Department of Agriculture and some local groups, including the Le Cordon Bleu Institute of Culinary Arts, helped DrinkLocalWine.com assemble its first get-together. We had a couple of dozen wine writers, representing newspapers, magazines, radio and TV stations, blog sites and other 21st-century media outlets. Most of the participants were Texans, of course, but California, Colorado, the District of Columbia, Georgia andMaryland were represented, along with my home state of Missouri.

Missouri and Texas have a wine link in Thomas V. Munson, who helped the Missouri wine industry in the 1840s, then moved to Texas and settled in Denison. His work as a horticulturist and viticulturist resulted in the development of a phylloxera-resistant root stock (first developed in Missouri) that was exported to France and saved its wine industry, at least until a later model of phylloxera developed. A statue to Munson stands in Montpel lier, France, and he also is known as the father of Texas wine.

Any 19th-century progress in the wine industry20in either state came to a screeching halt in 1920 with the arrival of the 18th Amendment, and its eventual repeal sparked a collection of state laws and religious edicts that threw a half-century blanket over grape and wine production.

More recently, both states have become cognizant of the value of grapes and wine. Texas has dedicated $4,590,000 (that’s millions of dollars) in 2009 to the industry, with $2,616,000 for research and education, $1,724,000 for marketing and $250,000 for rural economic development. The state now is No. 5 in the nation in wine production, No. 7 in grape production. And Texas has eight designated viticultural areas: the Texas High Plains, the Texas Hill Country, Fredericksburg (inside the Hill Country AVA), Bell Mountain, Davis Mountain, Texoma, Escondido Valley and Mesilla Valley, which crosses the border into New Mexico.

Given the size of the state, practically every grape known to mankind is planted, but some do better than others—several growers noted that it’s difficult to grow Chardonnay, a fact which pleased those of us who consider ourselves aligned with the ABC people. But vinifera like Cabernet Sauvignon, Tempranillo, Syrah, Grenache, Mourvedre, Viognier and Semillon do well, as does Blanc du Bois, a hybrid variety recently developed at the University of Florida which grows well in East Texas and around Galveston. It can be vinified across the spectrum.

We tasted about 50 wines while we were visiting, which is too many for a valid judgment, but it was an interesting experience. Adding to the difficulty was the fact that the Texans had decided to have comments via Twitter. I don’t do that, thinking that Twitter is the reincarnation of the CB Radio craze of the 1970s, and also thinking that it is impossible to make an intelligent comment on anything in 140 characters.

Given the individuality (some might call it cussedness) of wine writers, it was amazing to see so much agreement on a single wine, but practically everyone raved about the 2006 Madeira ($39.95 retail) made from Blanc du Bois by Ray Haak, whose Haak Winery, in Santa Fe, TX, was the first ever built in the Galveston area. It’s a gorgeous wine, named best among sweet whites; a dry version from the same grape made in stainless steel drew good response, too.

Dry white honors went to a 2008 Pinot Blanc from Flat Creek Estate in Marble Falls ($34.95), crisp and beautifully balanced, with guava on the palate and a lovely bright finish. The grapes are grown in the Hill Country.

Inwood Estates of Dallas was voted tops=2 0among dry reds with its ‘05, a 65-35 blend of Tempranillo and Cabernet Sauvignon ($39.50). The grapes come from the High Plains; the=2 0wine has a wonderful deep color, big flavors led by black currant with hints of chocolate.

Sandstone Cellars of Mason, topped the sweet red category with a 2006 IV Port-style red ($40). The winery names its wines in chronological order; a charming dry red is called VI. A year in barrels and a year in stainless steel have brought forth a rich, complex, fortified wine with chocolate and mint in the aroma, more mint and berries on the palate, coffee in the finish.

As a lover of rosé wines, and a person very happy to see them gaining in quality and popularity across the nation, I was enthusiastic about the Blush Royal from Cap Rock Winery in Lubbock, 95 percent Ruby Cabernet, 5 percent Sauvignon Blanc. At $9.95, it’s a real bargain, and it’s a fine companion to the spicy food of Southeast Asia.

In terms of much of the nation, Texas winemakers haven’t been at it very long, but they’re obviously trying hard to make up for lost time and showing a great deal of success. Drink Local Wine fans consider it a shame there isn’t more production and better distribution for wines from Texas, and from other states.

— Joe Pollack has been writing and talking about sports, wine, food, entertainment and other happy subjects for more than 50 years. He blogs at St. Louis Eats and Drinks With Joe and Ann Pollack.