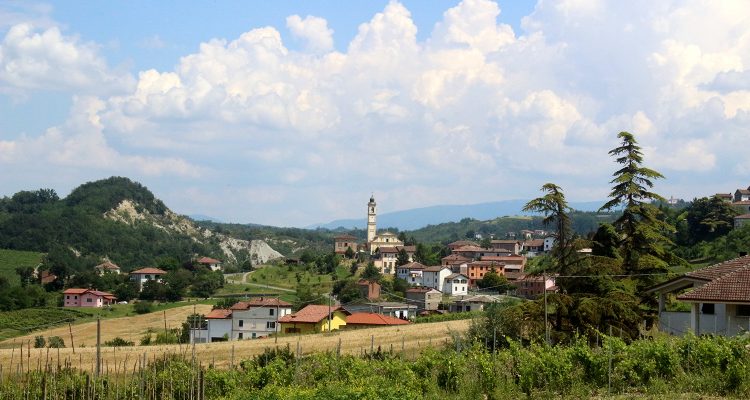 Testing the Limits of Timorasso

This is part II of our series on Timorasso. Read part I.

Claudio Mariotto smiles impishly as he pours a wine named L’Imbevibile—Undrinkable. It’s anything but. Fermented in amphora for 30 days on the skins, this intense, apricot and honey–inflected wine is one of the many experiments seen at the event called Quatar Pass per Timurass, roughly “Four Routes for Timorasso” in Piedmontese dialect.

This event is essentially an annual, open-cellar day in June–held in the Colli Tortonesi DOC zone, organized by the Piedmont chapter of Slow Food–and also the best way to find out what timorasso winemakers are really up to. They pour not only their commercial releases—classic Derthona and various single-vineyard timorassos—but also their tests, wild experiments, and special bottles from private stashes. One can find orange timorasso, sparkling and frizzante timorasso, passito timorasso, blended timorasso, timorasso without sulfites, timorasso aged in acacia or chestnut barrels, timorasso with 10 years in bottle—every iteration imaginable.

This unfettered spirit of experimentation is more akin to craft brewing than to Italian winemaking where centuries of tradition are compiled into DOC and DOCG rulebooks as thick as yesteryear’s phone directories.

The fact that timorasso is new or rather, newly resurrected—gives winemakers liberty to act with similar abandon. Timorasso is effectively a blank slate, absent as a varietal wine since phylloxera nearly wiped it out in the late 1800s. And while the style pioneered by Walter Massa a century later has come to dominate and largely set the parameters for the Colli Tortonesi Timorasso DOC, there’s clearly a curiosity about what timorasso can do outside the DOC rulebook.

The current chapter of timorasso opens in 1987. That’s when Walter Massa harvested the 400 timorasso vines scattered in his family’s vineyards and made 560 bottles of varietal wine. He didn’t expect that the grape would have the right stuff for aging, but it did, possessing both acidic backbone and tannins—a rarity in white grapes. Timorasso’s age-worthiness is now its calling card.

In the years since, Massa has refined a style that emphasizes terroir. It’s no surprise that references to Burgundy pepper his conversation. Nor that he vinifies his three cru—Costa del Vento, Sterpi, and Montecitorio—as well as his Derthona (a vineyard blend) exactly the same way. He wants differences in taste to come from the soil, not the winemaker’s hand.

Massa’s vinification involves a cold maceration with stems in concrete tanks, fermentation in stainless steel with native yeasts and no added sulfites, then an extended period on the fine lees with battonage. “I like this style where the minerality is precise,” Massa says.

Others do too. “Battonage is important for this variety because it has a good sapidity and a good acidity that comes from the soil,” says Elisa Semino, third generation winemaker at La Colombera. “It’s rich in structure, and battonage is perfect for full-bodied wines.”

Massa’s textured but unoaked approach is now the prevailing style. What’s more, the Colli Tortonesi DOC has codified Massa’s philosophy about tiromasso needing extra time in the cellar. The official rule is that Colli Tortonesi Timorasso DOC can’t be released until September 1 after harvest.

So what’s Derthona? The simple answer is that it’s a regional identity, much like Chianti or Barolo—or Montrachet or Chablis. Derthona is the ancient Roman name for Tortona, once an important settlement on the Via Postumia. La Colombera’s back label elaborates further: “Derthona comes from Latin for ‘piccola Roma.’”

Around the year 2000, the name was collectively adopted to signify timorasso from the Colli Tortonesi. That was a time when Massa was coaching a group of producers on best vinification practices for this difficult grape. “We chose ‘Derthona’ because it’s a good territorial name,” says La Colombera’s Semino, who took part.

The Colli Tortonesi consortium has been lobbying for the creation of a separate Derthona DOC—“similar to Gavi, similar to Barolo, similar to Barbaresco,” says Semino, a newly elected vice president of the consortium. But word came down in June that the ministry of agriculture nixed the idea due to the fact that Derthona is no longer in use as a town name—unlike Gavi, Barolo, and Barbaresco. “New DOCs are hard in Italy now, because they depend on the EU, and Brussels doesn’t want a new DOC because there are already so many,” Semino admits. She and other producers immediately met with a consultant to restrategize. “He told us to instead make a sottozona, a subzone, with the name Derthona. That’s what we’re trying now. It will become ‘Derthona dei Colli Tortonesi.’ For us, it’s important to use ‘Derthona’ because that’s the name of the territory.”

Coloring outside the lines

Meanwhile, outside the Derthona label, experiments are going full steam.

Claudio Mariotto isn’t the only one testing the limits of timorasso’s tannins with an orange style. Of the 15 wineries I visited during two editions of Quartar Pass Per Timurass—a fair but random sample—one quarter were playing with extended skin contact lasting weeks or months.

The annual Quatar Pass Per Timurass event allows you to peer inside the lab. “This is my failed experiment,” Enrico Mandirola cheerfully admits, pouring a timorasso that saw 25 days on the skins. Despite this, the color was the same pale gold as his normal timorasso, “Though in my opinion, the aromas are quite different.” Undaunted, this fourth-generation vintner hopes to develop three tiers of timorasso: classic, matured in wood, and orange.

A few miles to the west, Andrea Tirelli’s biodynamic winery is one of the region’s smallest, at 8,000 bottles. It’s also the most adventurous, willing to take risks with creations like Ostara, a pét-nat timorasso/cortese blend. Bottled the ancestral way—with grape must not fully fermented—the process continues in bottle under a crown cap, resulting in a lightly fizzy, unfiltered wine. Ostara is commercialized, but other pours were not, including a dry, oxidized, late-harvest timorasso that’s reminiscent of an oloroso sherry.

Further down the road, organic winemaker Daniele Ricci is giving timorasso the full metodo classico treatment, following three years of experiments with bubbly versions. His Donna Clem (named in homage to his grandmother Clementina) is a zero dosage spumante that spends three years on native yeast. It shows just how elegant and complex sparkling timorrasso can be.

Ricci has also taken a deep dive into orange wine, inspired by a visit to Oslavian winemaker Josko Gravner in the 1990s. Ricci makes two versions. The first, Giallo di Costa, spends 90 days on the skins. The second adds amphora into the equation: The wine begins in amphorae buried to the neck in Ricci’s vineyard. There the wine macerates on skins for 100 days, followed by a year of maturation in chestnut casks, then another year of refinement in bottle. Wholly unique, this wine isn’t called Io Cammino da Solo [I Walk Alone] for nothing.

Of course, all these winemakers make very fine Derthona and timorasso cru. That’s the territory’s flagship, after all, and it’s what everyone is hoping will gain global recognition.

But if you’d like to experience a mature timorasso cru aged in the winemaker’s cellar for over a decade—like the San Leto 2004 that Ricci poured—or witness the raw, unfiltered, trial-and-error phase of a newly revived wine zone, then head for Quatar Pass Per Timurass next June.