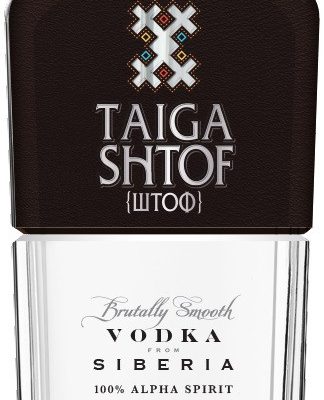 A Giant Steppe in Vodka

I am a ginhead, and have always been pretty dismissive of vodka — until now, when a particular bottle came into my possession. It bore the name “Taiga Shtof” and came from Siberia. It also bore a hefty price tag.

As you know, modern vodka is a triumph of marketing. Up until the 1980s, it was mostly considered a neutral, usually cheap spirit suitable to mix with tonic. But in 1986 Absolut engaged in an aggressive marketing campaign that elevated it to cult status to rival the sought-after but pricey Russian brands. The booming success of the effort sparked a vodka explosion that saw the advent of niche brands like Tito’s (U.S.) and Grey Goose (France). Vodka acquired a cachet and became hip.

In most U.S. liquor shops today there is usually a small selection of gin, but a huge selection of vodka from everywhere and distilled from about anything. Flavored varieties abound. Industry statistics show that vodka is the most popular spirit in the U.S.

But, to us spirits snobs, gin was always the finest white spirit. It was complex and herbal, while vodka was pretty basic, a sort of utility infielder of spirits. Sure, there were some better brands, but I found little to make me sit up (or fall down, for that matter).

This bottle of Taiga Shtof vodka also came with the marketing hype laid on very thick: “’Taiga Shtof’ is not just a brand, it is the embodiment of a philosophy and belief around the unbreakable spirit, akin to the Siberian people forced by the hardship of surviving against the harshest elements, much like the vodka itself,” says the website. It is “100% alpha spirit” (whatever that is; the makers claim it is the purest alcohol available in Russia) with “crystalline pristine waters sources around the region” that is “process-column filtered through an activated charcoal and platinum and finally ice-treated for total purity and a brutally smooth finish.” Is Siberian vodka a 12-steppe program…?

The brand was co-founded by former CEO of Group Baron Philippe de Rothschild, Xavier de Eizaguirre and his former export director for Russia, Roman Gazine (who is Russian but lives in France), along with two cousins from the Magomedov family, which, as it happens, is close to Russian President Vladimir Putin.

But the yada-yada aside, this is a seriously good vodka. I opened, I tasted, I was floored. Here, at last, was a vodka that is a fine spirit. This isn’t for mixing; it is for sipping. You could do shots, but it would be a waste. It is extremely smooth and complex, with some citrusy and herbal notes and hints of coriander. For the first time in a long time, I made a very, very dry martini with vodka instead of gin – and it was fabulous. (A great martini demands a fine vermouth, so pick accordingly. And remember that vermouth is a wine, so it goes bad; keep it in the fridge.)

Taiga Shtof has only recently acquired a US distributor, so it is not easy to find, although they are pushing to get into the American market. If you do happen to find it, be prepared: I managed to get a bottle for around $70, but I’ve seen it for up to $90.

Well, at that price it really would be good ice-cold with caviar…