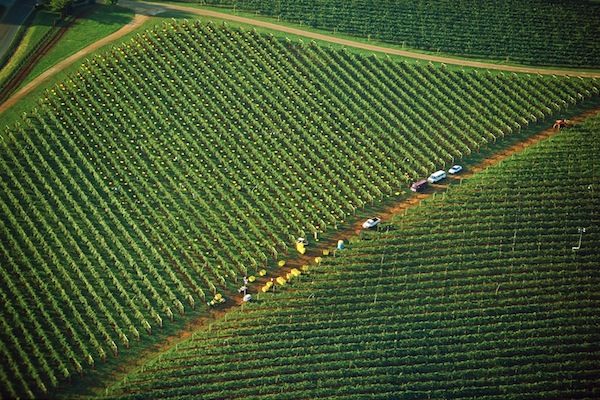 For those of us who were writing about wine at the time, it was a surprising, even humorous-sounding, development.  The Italians were coming to Virginia to make wine.

The year was 1976, and we had already been shocked once that season.  Napa Valley (with some help from Sonoma grapes) had just won both red and white categories of what could have been called the “Justification of Paris.”  Californians, Time magazine breathlessly informed us, could make wine just as good as those snot-noses in France!

But the Italian expedition was perhaps even more shocking.  It was America’s Bicentennial celebration, and all of us who were old enough to pick up a wine glass (tiny things in those pre-Riedel days) knew what founding dad Thomas Jefferson discovered the hard way: you can’t make vinifera wine on the East Coast.  So why had the wealthy, well-respected Zonin family decided to invest millions in trying to do just that?

Today the shock has lessened but the money keeps flowing.  Over the past decade or so a parade of billionaires and three-digit millionaires with names like Kluge, Trump, Case and Cooke – as well as a batch of just simple millionaires – have been eager to establish themselves as very serious winegrowers, not in Napa Valley or even Long Island’s tony East End, but in the Old Dominion.  And Zonin’s Barboursville Winery, now over 30 years old, continues to flourish.

They join an array of lesser-known winegrowers who have flocked to the state in recent years, especially in the Charlottesville area, after the success of such pioneers as Zonin, Dennis Horton and Jim Law.  The soil and the climate make Virginia perhaps the most widely planted, and most-consistent, winegrowing area on the East Coast.  Plus, vineyard land is much more-affordable here than in Napa Valley.

Patricia Kluge, ex-wife of zillionaire John Kluge, was the first of the new wave of high rollers.  Kluge, with whom I drank wine a few times, brought passion, intelligence and excitement to the Charlottesville area.  She also imported beaucoup French wine consultants to Kluge Estate, including Michel Rolland — who looked only slightly out of place giving a celebratory speech in a Charlottesville diner then owned by Kluge and husband William Moses.  When the economy went belly up and Kluge lost her fortune, another billionaire, Donald Trump came to the rescue. He bought the winery, renamed it after himself and installed son Eric to head it.

When AOL’s Steve and Jean Case opened their Early Mountain Vineyards last year, they posted on their website a maxim many lesser-financed winegrowers would reluctantly agree with: “Our goal is not to make money but instead to make a difference.”

Rutger de Vink came to America as a teenager when his father sold the family’s pharmaceuticals company in the Netherlands and switched continents.  De Vink fell in love with winegrowing and founded RdV Vineyards, retaining yet another Frenchman, Eric Boissenot, to make the wine, releasing his first bottles in 2008.  Although Boissenot is not well-known outside of Bordeaux he and his father Jacques quietly serve as consultants to many, if not most, classified growths of the Médoc.

There are many other well-heeled businessmen – retired and moonlighting – in the Virginia countryside.  Tony Champ and his wife Edie founded White Hall Vineyards in 1991 after he took early retirement as CEO of Fiber Industries.  Scott Stinson, a Washington, DC, architect, started Stinson Vineyards with his daughter, Rachel in 2009.  David Pollak, a senior vice-president of Cintas, and his wife Margo established Pollak Vineyards in 2003, drawing on Pollak’s experience of once managing Bouchaine Winery in Napa Valley during the late 1970s.

It should be noted these are not vanity projects. All produce critically praised wines, utilizing their business-trained owners’ penchant for routinely hiring consultants and investing for success.

And, not surprisingly, in their promotional materials many of these well-financed ventures claim inspiration from Jefferson’s noble failure.