Easter and Passover are upon us, even in this most uncertain of times, so adding some sweetness to our lives might just provide a much-needed lift this week. (Or anytime, really.) Chocolate is often part of the holiday mix, as are other sweets, and wine is certainly always on the table. Dessert wine, however, is rarely top of mind, even among those in the know. Despite featuring some of the oldest winemaking traditions in the world, these wines have very little market share, which is a true shame.

Italy in particular has so many traditional, incredible dessert wines to choose from; not only do each of the country’s 20 regions feature unique choices made from local varieties, some even differ from town to town. So, in addition to being delicious finishes to any meal, they speak to the regionality in both wine and cultural traditions. Many are also used to celebrate Mass or other Christian festivals, especially at Easter, making now a perfect time to pop the cork on a bottle that’s been waiting patiently for a special occasion.

Though there are other types, the vast majority are passito wines, meaning they’re made with dried grapes (red or white). After being left to raisin – on either the vine or on special mats – for three to four months, they’re then pressed and aged as with other wines. This method concentrates sugars and can, in some cases, allow for the introduction of noble rot. These wines are also more stable, for long conservation and travel, meaning historically they were more likely to be cellared for special occasions or exported.

Though it would be impractical to attempt to cover every type of dessert wine made throughout Italy, below we’ll discuss some of the more popular varieties. 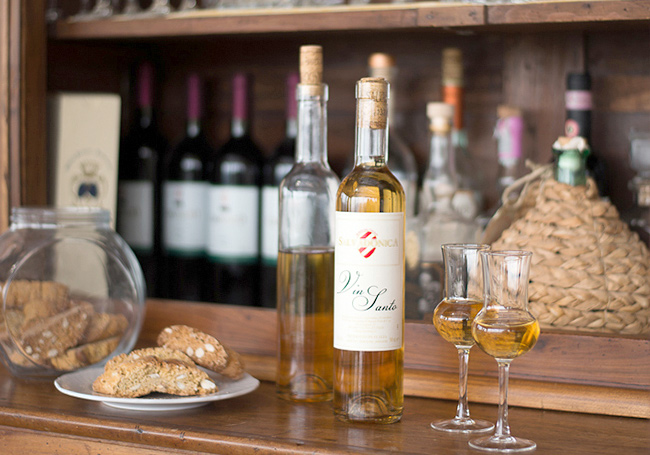 Perhaps the most famous of these passito wines – and the first many visitors encounter in Italy – is Vin Santo, literally “Holy Wine.” Though the name originated in Tuscany, its popularity has led to similarly labelled wine being made throughout the country. The etymology is not certain; it is most likely related to sweet wine’s use in Catholic Mass, though some argue it was traditionally fermented during Holy Week. Regardless, it is often enjoyed at Easter, with hard cookies or biscotti known as cantucci.

Traditional Vin Santo grapes Trebbiano Toscano and Malvasia Bianco are dried on mats or hung on strings in a special room known as an appassitoio, where it can get quite hot, and thus fermentation can begin spontaneously. The wine is then moved to another room, the vinsantaia, where it is fermented slowly under the eaves, at fluctuating temperatures, in small barrels called caratelli. Usually made with chestnut wood – though sometimes acacia, juniper or cherry – these casks can be decades old, and typically feature a deposit of yeasts called the madre (mother) that helps ferment the wine over several years.

Because much of the fermentation process is left to nature, there is much variation in terms of the alcohol and even the sweetness of these wines. As such, it is difficult to make generalizations about flavor, other than that the very best are intricate, luscious and rich. Some great examples can be found from famous Chianti producers such as Poggio Bonelli, Castello di Poppiano, and Vino Nobile di Montepulciano Cantina Crociani, among many.

Another form of Tuscan Vin Santo is Occhio di Pernice (“Eye of the Partridge”), made with Sangiovese (and sometimes other red grapes). After four months naturally drying on natural mats called stuoie, the grapes are pressed into a luxurious, ruby-red liquid. In the glass it is a complex and layered treat; Avignonesi from Montepulciano makes a beautiful example.

Another wonderful passito is made in Umbria with burly Sagrantino, one of most intense and tannic red grape varieties in the world. Though these wines do certainly feature a deep sweetness of dark fruit and spice, here it’s matched by distinct brightness and a bone dry finish that cleans and refreshes the palate. Look for producers such as Antonelli, Colepetrone, Perticcaia or Scacciadiavoli. 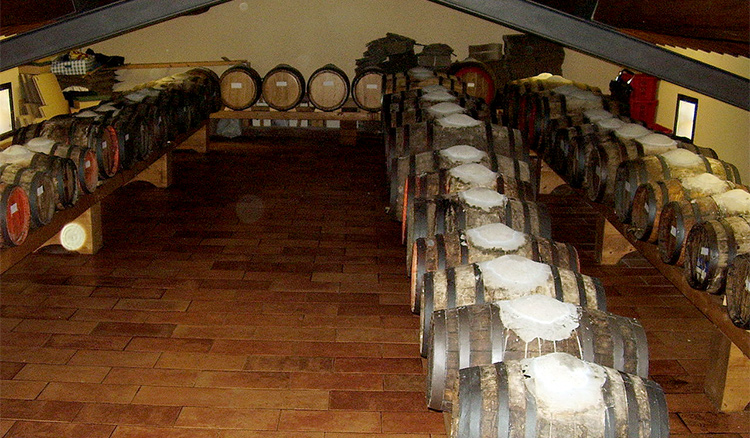 In Trentino, Vino Santo is made from local grape Nosiola. Here, the difference from Tuscan Vin Santo is that aging casks are regularly topped up to prevent ullage; the result is a less oxidized final wine. Amber colored with delightful dried fruit notes, these can easily rival the best Tuscans.

Nearby in Veneto, the term recioto is commonly used, typically followed by the area where it is made. For Recioto di Soave, produced of course in the Soave region, white grapes Garganega and Trebbiano di Soave (a biotype of Verdicchio) are featured. For neighboring Recioto di Gambellara, Chardonnay and Pinot Bianco are also included.

The region’s most popular dessert wine, however, is Recioto della Valpolicella, essentially the sweet(er) version of Amarone. Like the latter, RdV is made with a host of indigenous red varieties, mainly Corvina and Corvinone, but also Rondinella, Rossignola, Oseleta, Negrara, Dindarella, etc. Tedeschi’s Capitel Fontana is particularly lovely, featuring a harmonious blend of dark fruits, warm spice and anise.

Breganze, in Veneto’s Vicenza province, is known for Torcolato, made mostly from the local Vespaiola grape. These whites often taste of honey and mature fruits, but have enough acidity to balance. In particular, producer Maculan is the regional leader, with several dessert choices, including Maduro, made with local red grape Marzemina.

Moving east to Friuli Venezia Giulia, both Picolit and Ramandolo are popular passito choices. The former, though well-known since the 17th Century, was given its own DOCG (Colli Orientali del Friuli Picolit) in 2006. Often affected by noble rot, Picolit – which is both the grape and wine name – produces a magical, golden wine. Look for bottles from Livio Felluga or Jermann.

Ramandolo is another DOCG formerly part of the Friuli Colli Orientali DOC, in this case made with local grape Verduzzo Friulano (aka Verduzzo Giallo). These wines tend to blend dried nut and mineral notes together with stone fruits, and show less overt sweetness as many of the others discussed here. Try one with a cheese plate.

In Emilia-Romagna, the wonderful passito made from native Albana showcases apricot and peach flavors alongside loads of saline and mineral notes. Though a white grape, Albana also features notable tannins that help balance the sugars in the Passito.

Liguria’s Cinque Terre area is well known for its Sciacchetrà, which showcases indigenous grapes Bosco, Albarola and Vermentino. For those who visit these five incredible hilltop towns that grip the cliffs overlooking the sea, this is the most famous passito in the region, so don’t miss it. If the pronunciation seems difficult, say Chaka Khan – like the singer – and more or less they will understand.

No discussion of passito could be complete without mentioning Passito di Pantelleria, the ethereal elixir from the eponymous volcanic island southwest of Sicily. Made from the Zibibbo grape (aka Muscat d’Alessandria), grapes are allowed to wither on the vine before harvest. Donnafugata’s Ben Ryé (pronounced Reeh-eh) – one of the most famous Italian dessert wines worldwide – is an extraordinarily rich, complex version, with notes of stone fruit and candied citrus. Though it features an extremely high 195g/l residual sugar, it is – thanks to the quality of grapes and stainless steel aging – neither unctuous nor cloying.

Over in Puglia, Primitivo (the Italian biotype of Zinfandel) already produces rich, sweet wines – even those that are considered dry. Wines from the Primitivo di Manduria Dolce Naturale DOCG, then, are even sweeter, more powerful and deep. Producer Gianfranco Fino creates this special wine only in years that he feels are exceptional; deep ruby red in color, its intense bouquet features a complex melange of floral notes, herbs, nuts and fruit. Thanks, however, to the minerality and acidity on display here – as so often found in the regular Primitivo di Manduria DOC – it remains balanced and harmonious, never over the top, and finishes beautifully with a long dose of fine tannins and chocolate.

While certainly not exhaustive, the hope here is that sweet wines – and Italian ones in particular – make it to our tables for this holiday, or others. A category that needs more love, there is no better time than this Holy Week to bring out a few bottles and enjoy life to its fullest with an extra dose of sweetness.