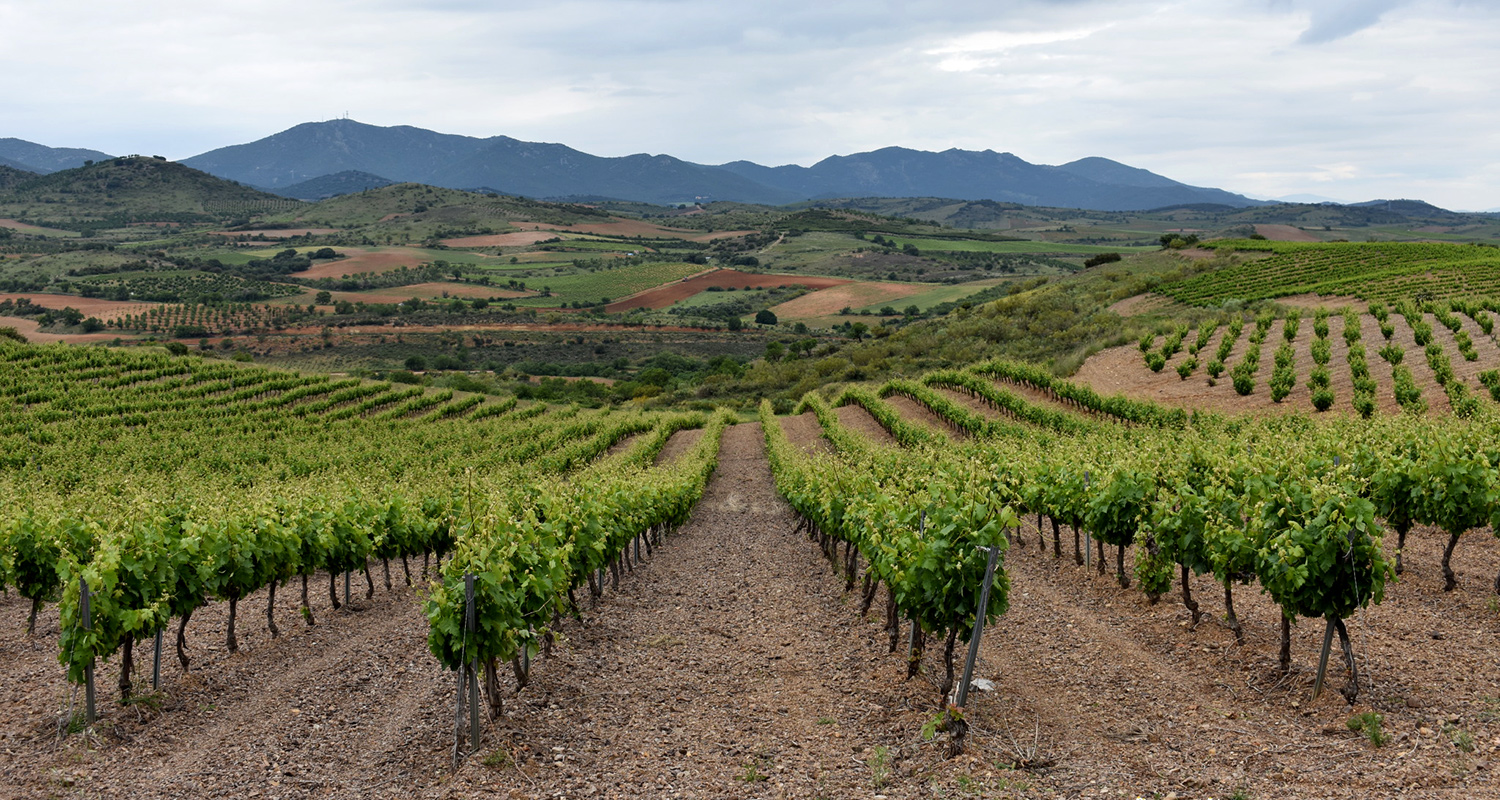 Perched in the Northeastern corner of Spain, Cariñena’s vineyards cannot be summarized neatly. This Spanish wine region’s terroir comes not only from the soil and climate in which the grapes are grown, but also the rich, incredibly diverse culture and history of the region.

The grape — also Cariñena, known in other places as Carignan, Carignane and Carignano — is more famous than the area. While it is thought to be native to the region that bears its name, it is now more closely associated with France’s Languedoc-Roussillon, as well as Spain’s Priorat and Catalonia. Often blended with Grenache, Syrah and Mourvedre, when well-vinified, Cariñena wine can be memorable, meaty, even divine, on its own.

Though still a somewhat obscure region stateside, Cariñena is the second oldest Denomición de Origen (DO) in Spain, having been officially recognized in 1932. It occupies 82 square kilometers in Aragon, one of the country’s 17 autonomous communities. Plantings of Grenache (Garnacha) and Tempranillo now actually outnumber those of the grape Cariñena, which ripens late in the season, and is therefore more susceptible to disease. But when local producers do make a 100% Cariñena, the best ones shimmer with black fruit flavors, hot red pepper, savory licorice and a saline snap.

“Cariñena has a complicated history, and until recently, the region was not in the position to invest a lot financially into sustainability or marketing initiatives,” says Ignacio Pastor, General Manager of Bodegas San Valero, a wine cooperative that was founded in 1944, and has 3,500 hectares under vine. “But we have great pride in what we do here, and we are ready to show American consumers our unique region; its history contributes to beauty of our wines.”

Pastor also explains that the region has always enjoyed excellent export markets in Germany, the U.K., and even Canada, but is still relatively unknown in the U.S., though its wines are widely available. Why? Simply put, marketing. While many other regions have been pouring millions into messaging to U.S. consumers for decades, Cariñena only got started around 2012.

Nothing, in fact, about the region seems logical, fluid or well, even very Western European, never mind Americanized, but that’s what gives it its spirit, driving the region to reach for internationally recognized excellence after decades of comfortable complacency. I’ll do my best to explain. 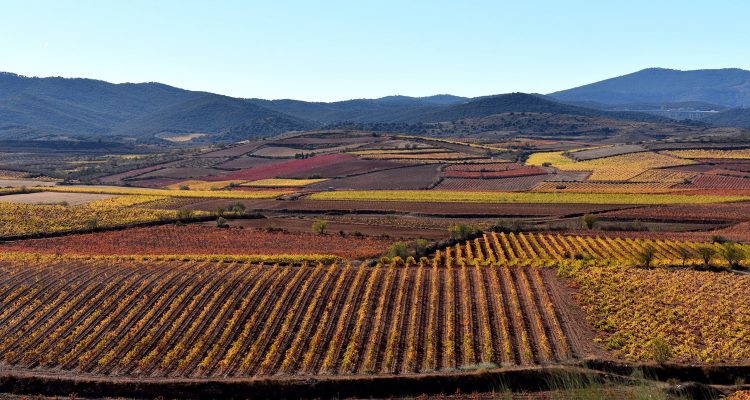 Archeologists have discovered pottery dating back to the third century B.C. which shows that then-Roman villagers in Carae (now Cariñena) drank wine mixed with honey. Over the following centuries, Aragon was conquered by a series of rulers, who imported their art, culture and foodways, remnants of which can still be seen in the region’s capital, Zaragoza.

After arriving in 714, Muslims used Zaragoza as a base from which they could stage invasions of the Ebro Valley and France. The city thrived under Muslim rule, becoming known as a cultural center and one of the few places at that time that tolerated Muslims, Jews and Christians. The Aljafería Palace, still standing today, is a testament to that cooperation and collaboration.

Christian king Alfonso I took the town in 1114, ending four centuries of Muslim rule. Later, when Ferdinand II married Isabella of Castille in 1469, it set off a sequence of events that would change the history of the world. In addition to leading the formation of modern-day Spain, this royal couple funded Christopher Columbus’ voyage to the Americas. They also led the infamous Spanish Inquisition, murdering many Jews and Muslims and expelling the rest. Ironically, they used the Muslim-built Aljafería Palace, which they had previously expanded, as their headquarters during this period.

Zaragoza, unlike Madrid and Barcelona, isn’t teeming with haute couture and Michelin-starred restaurants, nor is English spoken on every corner. But that’s part of the charm. Here, one can squeeze into a restaurant without a reservation, feast on local specialties such as stewed wild borage, reminiscent of celery; migas, bread innards fried in olive oil and served with garlic, sausages, peppers and juicy grapes; Ternasco de Aragon, a 90-day-old milk-fed and pasture-raised lamb, with a lush and rich, but light and springy texture, often served on the bone — all paired with locally produced wines. Don’t forget to order a side of olives with every meal; they’re wildly different at every place, and all unforgettably briny, tasting at once of the sea, the earth and the sun.

Outside, there’s Mudéjar art and architecture everywhere, which represents a cultural collaboration between Muslims, Christians and Jews. Typically made from brick, ceramic, plaster and wood, there are elements of Romanesque and Gothic styles blended with Andalusian style semi-circular arches and heraldic and geometric decorative elements.

This melting pot of cultures, that history of hardship and endurance, the sense of community even amid chaos and war, stretches well beyond the city of Zaragoza, into the manner in which the vineyards are farmed, and the spirit with which the growers and winemakers approach it. 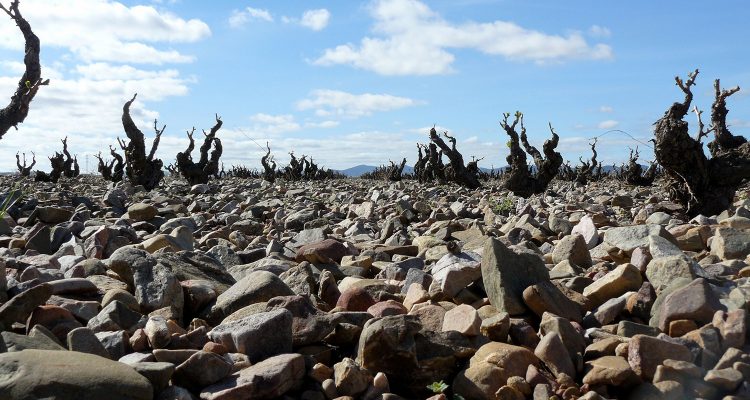 On cloudless days high up in the sloping vineyards, the Pyrenees tower like gray god-boulders on the horizon. The vineyards are visited by fierce winds, the most notable being the dry cierzo, which screams down from the north like a gift from Anemoi, keeping vines healthy by literally blowing away mildew and rot.

These vineyards are as diverse and delightfully unpredictable as the topography. Some of the older ones look almost haunted, all big-man-fist-sized rocks piled on bent down, exhausted looking Grenache and Tempranillo vines, some of which are 100 years old or more. Miocene clay dominates 80% of the DO, but there are alluvial soils as well, and rocks of various sizes everywhere. Though an apparently disordered jumble, when I taste a single grape during harvest season, it conveys all of the flavor, beauty and complexity that matures in these stark vineyards. 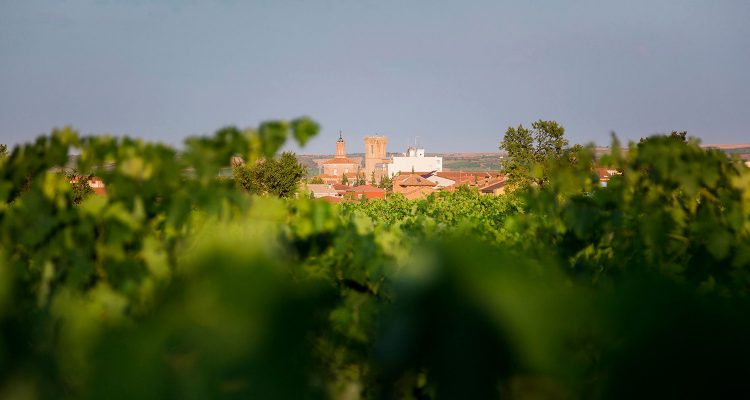 This land-locked region’s poor soil makes it perfect for grapes, but little else, and the wine industry has long driven the economy. But in the 1930s, the Spanish Civil War disrupted the progress it made right after earning DO status; since then, and until very recently, Cariñena has struggled to assert itself on the world stage.

For years, co-op wineries cranked out millions of bottles; in 2017, about 54 million were sold. Controlling the grapes grown by most of the 1,540 growers, the big three co-ops are: Bodegas Paniza, Bodegas San Valero and Grandes Vinos. Paniza has about 3,000 hectares under vine, with 300 growing partners, and Grandes Vinos has 4,500 hectares and 700 partners.

Speaking to locals, both farmers on the ground and co-op managers speak of a seismic change in the way grapes are grown here, not to mention how they are bottled and sold. This shift has multiple inspirations: newfound consumer desire for wines with a backstory and sense of place; the challenges of climate change (which has cut harvest sizes in many years); and local pride, or the desire to share the region’s potential with the world.

In 2011, Cariñena became a Denominación de Origen Protegida (DOP), and in 2012, its producers launched an awareness campaign dubbed El Vino de las Piedras (Wine from Stones), that led to an 15% uptick in exports, according to the consortium’s marketing manager Isabel Adé Portero.

What’s equally significant to a marketing campaign is the millions of dollars in investment on the ground at the big three co-ops. In 2011, for example, Bodegas San Valero launched a sustainability program to wipe out the European Grapevine Moth organically. They experimented with a 100-hectare plot, using pheromones to essentially confuse the moths into thinking they’d mated. The program was so effective that, by 2015, Paniza and Grandes Vinos also adopted it, along with the rest of the DO. The moth has now been eliminated in most of the region, with an estimated 75% reduction of synthetic pesticide use.

These wineries are also utilizing solar energy in the bottling facilities, employing Integrated Pest Management in their vineyards and working to optimize irrigation by monitoring vine hydration ultrasonically. Grandes Vinos has recently improved their bottle designs, reducing the weight of each bottle from 550 to 390 grams, and has eliminated nearly all pollutant emissions, according to marketing manager Manuel Garcia.

Winemakers in Cariñena are also experimenting with fermenting and aging their most prized, hand-selected acres of Cariñena, Garnacha and Tempranillo in earthenware, cement and French oak. The most interesting wine I tasted, for example, was the Cariñena Terracota 2014, from Grandes Vinos’ Anayon range. Featuring grapes from 60+ year-old vines in the D.O.’s highest vineyards, this particular wine — of which less than 2,000 bottles are produced — is aged for a year in 150-liter earthenware urns. It was strange, enchanting, and more alive and earth-rooted than anything I’ve ever tried. Did I love it? No. Am I obsessed with it and do I want it again, now? Yes.

“I decided to launch this project in 2011, when I thought of how focused we are on innovation and the future at Grandes Vinos,” explains winemaker Marcelo Morales. “I remembered how our forefathers made wine, naturally, in urns, a vessel that has been used in prehistory to the present day. Choosing our local grape was easy, and I knew that aging it in earthenware urns would enhance its acidity, fruit and mineral character, and produce a different and special wine — where the slow and constant oxygenation in the urns and its concentrating effect would honor the wine as it deserved.” 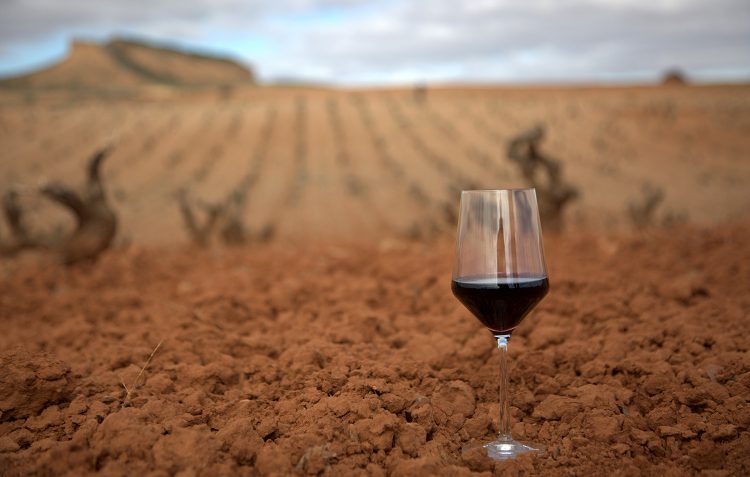 Cariñena is rooted in history, but eagerly facing the future. It’s creating value wines (often $15 and less), old vine Garnacha, Tempranillo and Cariñena that can stand next to wines two and three times the price.

Will consumers want to drink from their still relatively unbranded cup? Time will tell. For me, Cariñena’s embrace of its multi-hued history and green future tastes perfect. I can’t wait to return, this time with a wine suitcase so I can stock up on more of the wines unavailable here (yet).