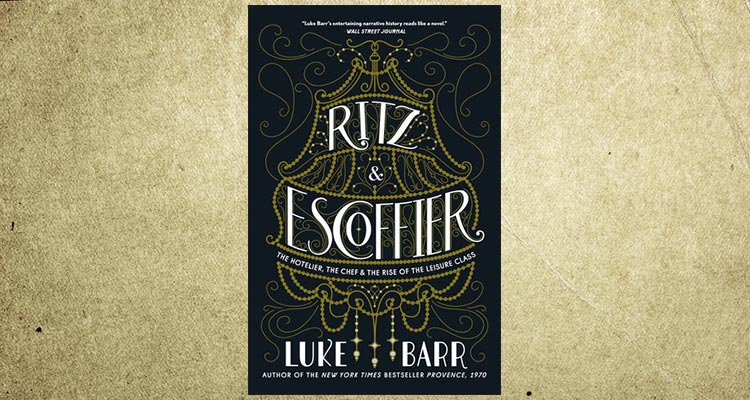 Book Review: Ritz & Escoffier – The Hotelier, The Chef & The Rise of the Leisure Class

The word “ritzy” has come to mean “high living,” and it came into the language from the name of the man who made his life mission to market luxury. In doing so, Swiss-born hotelier César Ritz achieved immortality in the late 19th century. He accomplished his goal of luxurious hospitality by partnering with the French culinary giant Auguste Escoffier. Together the duo revolutionized the hospitality industry.

Author Luke Barr has written a briskly paced and engaging book of that monumental partnership. It is a fascinating account not only of the two men but also of the late Victorian period and the Belle Epoque of the 1890s.

Even today, to go to a Ritz – now Ritz-Carlton – hotel is to enter a rarified atmosphere. But in 19th century England, fine dining was scarce and hotels were mostly mediocre. So English theatre impresario Richard D’Oyly Carte decided to build the first true luxury hotel in Britain. Carte was rich, having earned thousands of pounds as the producer of the enormously popular comic operettas of Gilbert and Sullivan, and he was determined to have the best. It was the first hotel in Britain with electric elevators and electric lights. The majority of rooms had private en-suite bathrooms and hot and cold running water, which were luxuries at the time.

But Carte’s Savoy Hotel was foundering. So Carte pursued César Ritz, who had acquired a reputation for running upscale establishments across Europe, in cities such as Paris, Nice, Vienna, Lucerne, and Monte Carlo. In 1889, Carte successfully wooed Ritz, who then moved to London to run the Savoy with his own team.

Ritz first met Auguste Escoffier in Monte Carlo, where the former ran the “Gran Hotel,” and the latter astounded patrons with his expertise and creativity. The two men had also opened a restaurant together in the German spa town of Baden-Baden in 1887 before Ritz went to London, bringing Escoffier with him.

Ritz ran the Savoy with a perfectionist’s attention to detail. He even checked the flower displays and table settings daily. Escoffier left to his own devices in the modern kitchen, produced dishes that had never been seen on a London table. He became the first true celebrity chef.

Together at the Savoy, the two men infused vigor and excitement to English dining. At the time, eating out was often a dreary affair in London, with indifferent food and slipshod service. The well-to-do preferred eating at home with meals produced by trusty servants. At the Savoy, Ritz pioneered the concept of “affordable luxury” – meaning one didn’t have to be upper class and have a chef at home in order to enjoy the high life.

Soon the Savoy became the place to see and be seen. As Luke Barr put it:

“Ritz and Escoffier invented the idea of the restaurant as theater and food as a luxury. The resulting openness of their hotels and restaurants, welcoming a never-before-seen mix of people from all parts of society, was a sign of the times, yes, but also an instrumental agent of change. The Savoy in 1890 was the first restaurant in London where respectable women came to entertain, where raffish… gold and diamond entrepreneurs ate alongside princes, dukes, and barons, who ate alongside bohemian artists, writers, actors, and opera stars. That had never happened before. Anyone—anyone with enough money to pay the bill, that is—was treated well at the Savoy. The nouveau riche had arrived (many of them from America), and they flocked to the hotel, which offered a new and democratic kind of luxury, cooking very much at the center of it.”

Escoffier was putting together astoundingly creative 11-course meals. He created new dishes and named them after famous patrons. For example, “pêche Melba,”– a dessert of peaches topped with vanilla ice cream with a raspberry sauce – was named after the Australian soprano Nellie Melba. (Yes, Melba toast is also named after her, and was also created by Escoffier for Melba when she became ill in 1897.)

In this book, Barr paints a fascinating portrait of the period, of Richard D’Oyly Carte and his formidable wife Helen. Eventually, it was Helen D’Oyly Carte who became suspicious of the luxury lifestyles of Ritz and Escoffier, bringing about their downfall.

Ritz was discovered to be giving away expensive freebies of food and wine to favored guests, and both had been skimming off food and wine to the tune of about £3400, which is nearly half a million in today’s US dollars. Escoffier also got commissions – that is, kickbacks – from suppliers. As Carte later put it, they “forgot they were servants and assumed the attitude of masters and proprietors.”

In 1898 (some give the date as 1897) Carte dismissed them for fraud. The scandal was hushed up for many years after Escoffier and Ritz quietly dropped plans for a lawsuit of wrongful dismissal, but their signed confessions came to light in 1984.

The two men went on to open several other hotels, including the Ritz in Paris, which still exists. (The Ritz-Carlton brand – named after two hotels Ritz had opened in London and Paris – was bought by an investment company in 1911 to franchise the name in the United States. Today it is owned by Marriott International.)

I would have liked to see a bit more social context in the book. But Barr is a culinary historian, so the emphases on the food, menus, and hotel service are understandable. It will be of especial interest to those delving into the history of cuisine, the evolution of the hospitality industry, and the power – and seduction – of celebrity.