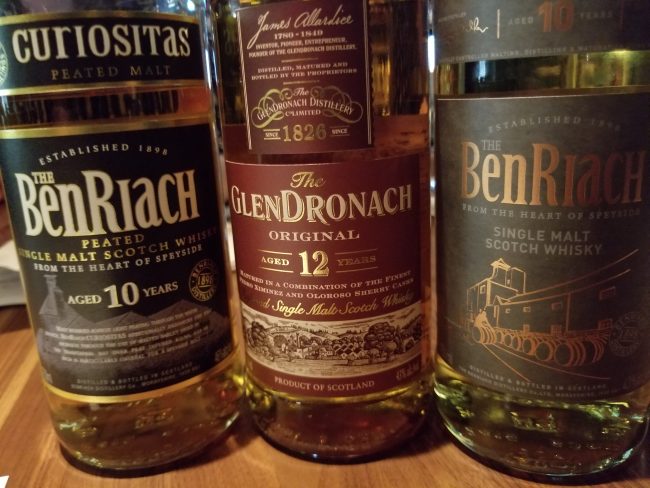 It was very loud in Earl’s Cocktail Lab when I was looking for the BenRiach party, but I finally remembered to mention that one of them was wearing a kilt. That caught the hostess’ attention and she immediately steered me toward brand ambassador Stewart Buchanan, neat and elegant in his full Scottish attire. After tasting the 10-year, the 12-year and then the 10-year peated, I thought my favorite was the 12-year, with its weighty complexity, spicy citrus and a hint of cocoa at the end from the oloroso sherry cask finishing. Then, thinking about it, I realized that the most outstanding whisky was actually the 10-year Speyside peated, such a rare commodity that the distillery has named it “Curiositas” and they only make it for six weeks a year. The barley is local, and the highland peat is outstanding: the aromas are green and lush, not dry and tindery. It’s as if the whisky has been given notes of luxuriant grasses, not thirsty ashes. In addition, there are flavors of orchard fruits and hints of citrus. The finish, from Bourbon barrels, is toffee and burnt sugar. ABV 46%

That night it was a chilly in Boston, and the Scotch was welcome. But as we warmed up, we sampled it with everything from vegan sushi to soft tacos to avocado smash. Maybe it was the cocktails too, but the whisky seemed to work with all the different types of food.

WHERE: Laich of Moray, Speyside, Scotland