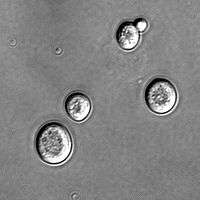 Saccharomyces cerevisiae under the microscope