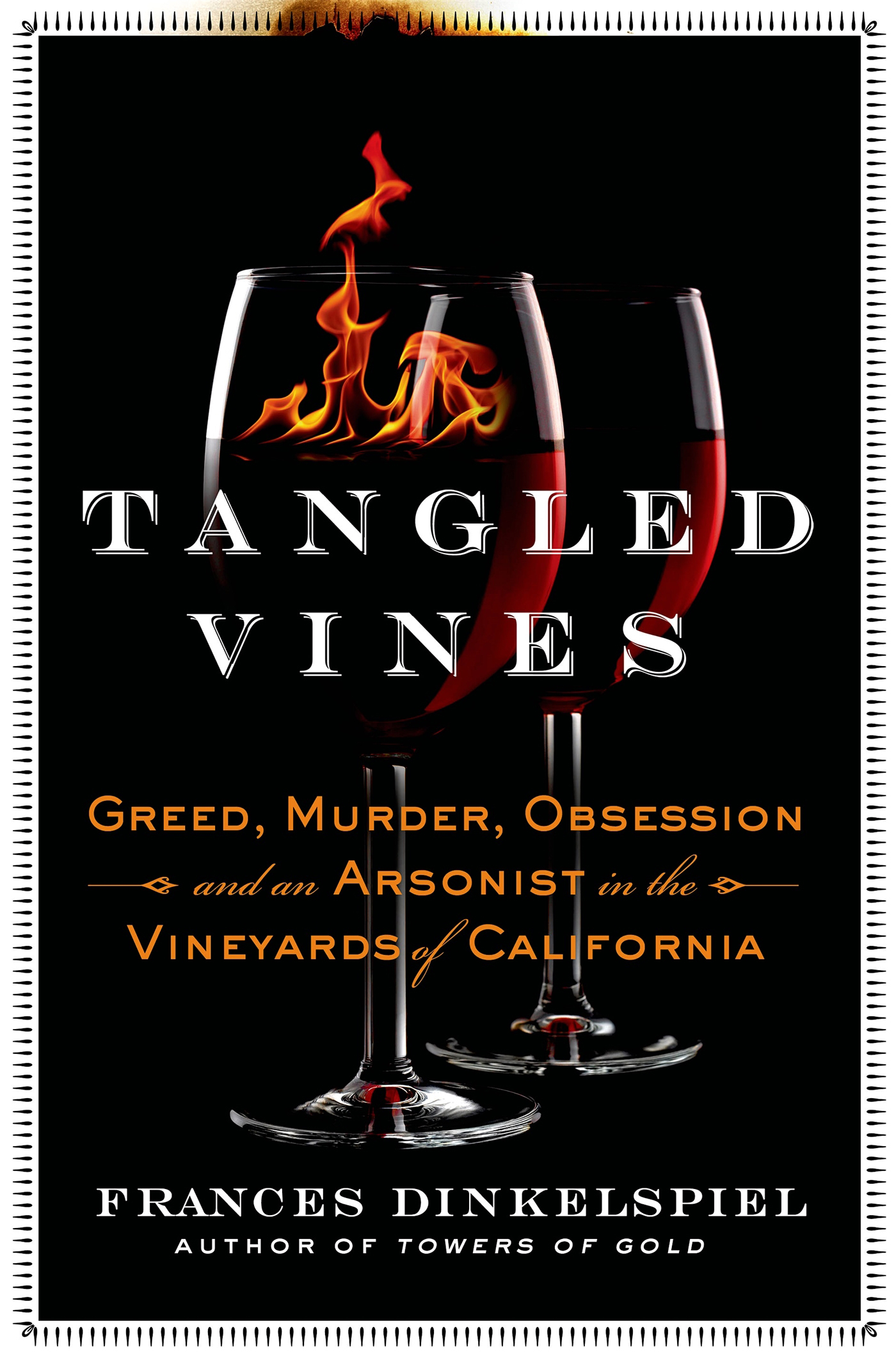 In her new book, Tangled Vines, journalist Frances Dinkelspiel does something remarkable. She turns a 10-year-old crime into a spellbinder,

The crime in question is the Oct. 12, 2005, fire that ripped through the Wines Central warehouse in the San Francisco Bay area, destroying 4.5 million bottles of premium wine worth more than a quarter billion dollars retail.

There’s never any doubt who done it. The book begins with a prologue – all the more gripping for its matter-of-fact, reportorial tone – tracing the steps of Mark Christian Anderson, former Sausalito commissioner and noted bon vivant, as he set the fire on that warm afternoon bang in the middle of harvest. (Anderson pleaded guilty in 2009, later asserting his innocence and trying, unsuccessfully, to withdraw the plea, and was sentenced to 27 years in prison in 2012.)

What fills up the next 300 pages or so is the what and the why of the crime. Why would Anderson, a professed wine-lover, destroy so much wine? And what drives people to create the premium wines that so many people love to drink?

Subtitled, “Greed, Murder, Obsession, and an Arsonist in the Vineyards of California,” and published by St. Martin’s Press, the book contains nail-biting passages where we relive the frantic hours as vintners waited to discover the extent of their losses back in 2005.

But there’s an equally gripping parallel narrative detailing the birth of the wine industry, a history which springs from a personal connection to the fire. The ruined wines included 175 bottles of Port and Angelica, a sweet fortified white wine, made by Dinkelspiel’s great-great-grandfather, Isaias Hellman, in 1875. That particular wine belonged to a relative from another branch of the family, but was a link nonetheless, particularly since Dinkelspiel herself has a few bottles of the wine.

Dinkelspiel deftly weaves together history, the Anderson saga – she communicated with him by phone and letter – along with other episodes of fraud and wrongdoing that have dogged the industry.  But the book is far from a dour recitation of wines and wrongs thanks to her ability to capture the drive and passion that has gone into creating the multibillion-dollar wine business — and to meticulous research allows her to recreate key passages of history in vivid detail.

And it always comes back to the wine. The final scene involves Dinkelspiel and master sommelier Fred Dame sharing, and enjoying, some of the 1875 Port.

“This Port has plenty of time left,” says Dame. “It’s going to outlive us.”

In an email interview Dinkelspiel, who in addition to being an author is cofounder of the Berkeleyside.com news site, shared a few details about writing Tangled Vines, and what lies ahead for that Port.

Q: What was the most challenging part of writing the book?

A: Figuring out the book’s structure since I had a story set in the 19th century and one spanning the 20th and 21st centuries. They seemed like two unrelated narratives for a long time until I figured out I was the link to both. I then inserted myself – sparingly – in the story. That brought the two pieces together.

Q: The most fun part?

A: I love digging through archives so that was enjoyable. But the most fun was researching modern Napa, which meant I attended wonderful parties at fantastic wineries with movie stars, gorgeous scenery, fabulous wine and food prepared by gourmet chefs. Growing grapes and making wine is a difficult business, but the Napa and Sonoma valleys have perfected enjoying the fruits of that labor.

Q: What are some of the things readers have been responding to in Tangled Vines?

A: People are surprised that early 19th Century vineyardists relied heavily on the forced labor of Native Americans to make wine. They are also responding to the mystery in the book: why would a well-educated, seemingly upright man like Mark Anderson destroy 4.5 million bottles of wine.

Q: Do you still have any of that port left? And what do you think you’ll do with it?

A: I have a bottle of the Port and a bottle of Angelica. Like I explained in Tangled Vines, owning wine that is 140 years old makes it seem like no occasion is important enough to open it. I need to get over that, though, and invite some friends over to enjoy the bottles.