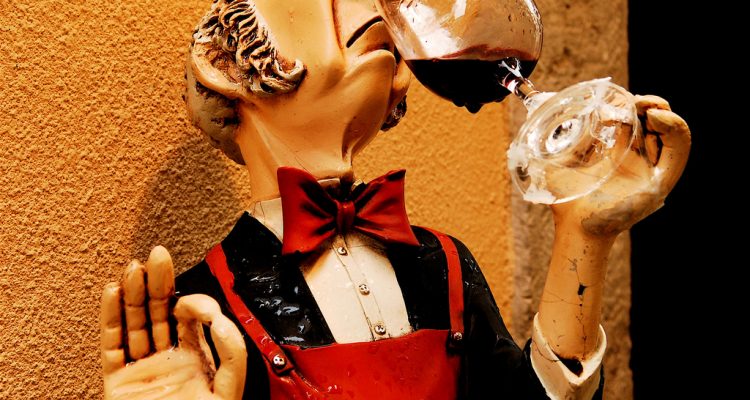 Why does wine smell?

For something to smell like anything, two conditions must be satisfied. One: it must contain volatile molecules. Two: those molecules must trigger olfactory receptors. The first has to do with physics. There’s just no way to get a molecule into your nose without dissolving it in the air first (aside from sniffing powders or shoving beans up your nostrils, but those aren’t especially helpful options). The second has to do with biology. Once a molecule makes it into your nose, it needs to dock with a suitable sensor for your brain to register it.

Physics first. For a molecule to be smelled, it must be in the sniffable air: for wine, the “headspace” above the liquid in your glass. Liquids are liquids because the molecules comprising them hold on to each other and make the whole group cohere. To evaporate, those molecules need to be persuaded to stop holding hands with their neighbors. “Volatility” describes their inclination to do so: the higher a substance’s volatility, the more easily it evaporates and the lower its boiling point. In that sense, everything is volatile. Even iron will boil, eventually, at 5182°F (2862°C). In practice, and more usefully, calling something volatile generally means that it’s more volatile than water.

You could say that, deep down, the life goal of all liquid wine molecules is to be in the air. Systems move toward being less organized, thanks to random molecular movement. Wine molecules floating around your living room are less organized than wine molecules collected tidily in your glass. However, the desire to shake off the fetters of liquidhood fights against two major opposing forces: gravity, and the attraction of one’s neighbors. Gravity means that, generally speaking, light-weight molecules are more volatile than heavy ones. Neighborly attraction means that molecules inclined to form lots of bonds are more volatile than anti-social ones.

All of this is to say that things you smell tend, generally speaking, to be on the small, light, less reactive side. Large, heavy wine molecules that like to gang up in long chains will never achieve flight, which explains why you’ll never hear someone talk about the aroma of tannins or sugars. “Sweet” smells are about aromas we associate with sweetness, like ripe cherries, not about smelling sugar as such.

Water is a small, light, liquid-at-room-temperature molecule. It is in fact incredibly prone to bond with its neighbors (water’s boiling point is much higher than you’d predict on the basis of its size alone) but it’s so small and light that significant evaporation still happens under realistic wine-drinking conditions. So why doesn’t water smell? Biology. Molecules can maneuver around your nostrils all day; if they don’t match up with and trigger an olfactory receptor, you’ll never smell them. Water doesn’t trigger olfactory receptors or, if it does, they’re so overwhelmed by the constant presence of moisture in the air that we’re always desensitized to them in any case. Thankfully.

Which brings us to biology. What does and doesn’t trigger smell is about shape. Millions of olfactory receptors line the epithelium – specialized skin, essentially – inside your nose. Those receptors come in at least 350 different shapes. Aromatic compounds fit into those shapes in ways that generate an electrochemical signal along a path ending in the olfactory cortex, the bits of your brain chiefly responsible for processing smell. (The olfactory cortex shares lots of cross-connections with the amygdala, a brain region considered our “emotion center,” which scientists have suggested is part of why smells trigger emotions so effectively.) We can smell far more than 350 different aromas because those receptors work in combination. Different sides of the same aromatic molecule may dock up with and activate multiple differently shaped receptors. And many smelly things contain multiple odor-active molecules.

How do you determine whether a molecule is odor-active? You smell it. The human nose is our most sophisticated chemical apparatus for establishing whether or not something has an aroma. Well, that’s not quite true. A molecule’s ability to shake metaphorical hands with olfactory receptors depends on whether one or more of the multiple shapes on the molecule fits the shape of one or more of our receptors. If a newly discovered molecule appears to share a shape that we already know to be odiferous, we can confidently predict that the new molecule will be odiferous, too.

Recent chemical analyses suggest that wines contain something in the range, roughly, of 25 to 35 odor-active compounds. Those aromas are additive, so a skilled sniffer can in theory deconstruct a complex aroma into component parts. The funny thing about describing aroma – certainly about describing wine aroma – is that it’s generally not about that kind of deconstruction. The rare tasting note will mention eucalyptol (suggested to influence Australian wines from vineyards abutting eucalyptus groves) or methoxypyrazines (the red bell pepper in syrah) or cis-rose oxide (the classic rose note in gewürztraminer), but a list of molecules isn’t all that helpful or interesting for most people. Far better is reminiscence.

What a scent calls up out of the archive of your previous smell experiences, given enough shared cultural context, ideally triggers a similar memory and allows someone else to reconstruct some shadow of your smell experience. The brain is crucial for perceiving smell, not just in terms of receiving olfactory inputs, but for providing memories that help us make sense of and communicate them. Trying to talk about smell is imprecise at the best of times, but shared cultural context counts for a lot. Hence why we so badly need new wine vocabularies, and why wine communicators in Asia in particular are working to create them. Black currants are plentiful in some parts of Europe and North America (and in my backyard garden in New Zealand), but hardly a common food in Bombay. Wine writers count on wine drinkers to be cosmopolitan. Tasting notes generate that “oh no, this is too fancy for me barrier” not just by piling on florid descriptors but in assuming that their audience can, in fact, call up a mental image of marzipan or orange blossom. Or peardrops, which Jancis Robinson suggests as a common tasting term and probably works well for a British audience, but is lost on this American.

The olfactory-enabled oenophile has three main persuasive tools at hand to encourage the sort of molecular disloyalty that liberates aromatic compounds from their liquid confines. First, temperature. The warmer a liquid is, the more heat energy its molecules have, the more they move, and the easier it is for any one movement to send them flying. Cold wines tend to be noticeably less aromatic than warmer ones. Temperature also affects our taste perceptions – colder liquids taste less sweet, for instance – which is one reason why you don’t want to overdo warming wine up; so, perhaps, is emphasizing aromas you’d rather play down. Swirling is the second. That well-known sniff-enhancing trick increases the amount of interface between liquid and air and gives volatile molecules more chances to leave. The third, choosing purpose-built glassware, helps if you get your nose in there. I don’t care whether it’s pretentious; “swirl and sniff” is just making good use of your technology.

So is taking good care of your olfactory apparatus. The physics of encouraging molecular motion is only half the equation. You can’t control some of your personal biology: olfactory sensitivity tends to decrease with age, women tend to be more sensitive than men, and some folk really are just more sensitive than others. Some medications and chemical exposures won’t do you any favors temporarily or permanently; you may or may not have control over those. Smoking is an efficient way to destroy olfactory receptors, but you didn’t need me to tell you that.

Why do we smell wine? Physics. Biology. But mostly because wine smells good.