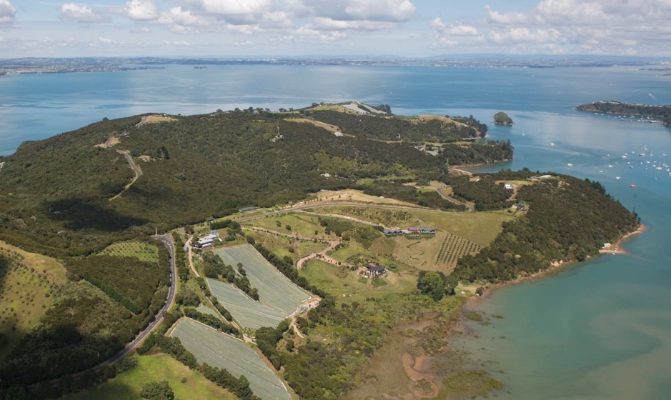 Need to flee the Californian drought? Try Waiheke Island, just off the coast of Auckland, New Zealand. The island has no public water supply, but plenty of blue and green water, and not just from the ocean.

If you’re a wine lover who enjoys big cities, you’ll find Auckland very modest at roughly 1.6 million people, and you’ll undoubtedly also find some worthwhile wine lists among the many, many restaurants decorating the downtown quay area. But if you feel cleaner covered in hiking sweat than bus exhaust, and if you still like wine, walk past the restaurants to the ferry terminal and float over to Waiheke Island. It’s close enough act like an Auckland suburb but doesn’t, and that’s a good thing, though sometimes challenging when it means the city water mains don’t run under the bay.

Waiheke looks as if someone built it to exemplify clichés. The whole island is beautiful, but split down the middle into an easy-to-access, shiny, touristy half and a hard-to-access, wild and untamed half. The shiny half hosts extravagant weddings and expensive restaurants. The wild half hosts nature reserves. Sandwiched in the middle is the ordinary, everyday Waiheke of the island’s residents and a pile of backpackers (who come in hopes of vineyard work and often end up washing dishes), both of whom afford fantastic conversation if you take time to ride the bus and walk the neighborhoods. It has sculpture parks. And – no surprises –  the wineries on the main drag are beautiful and well worth visiting, but the smaller folk in harder to reach spots without the million dollar views are the most fun. Visiting felt like being dropped into a Rick Steves travel guide.

The island’s climate is warm and humid with ample rainfall, which means that the vineyards can struggle with disease (and that you should carry a rain jacket). It also means that what seems an obvious concern –  especially to someone who’s spent more time in California than in New Zealand –  isn’t really. Waiheke has no public water supply. Residents, businesses and wineries included, are responsible for personally sourcing anything that comes out of their taps. I was alarmed: what do you do if you run out of water? That, apparently, doesn’t happen… much.

Green, blue, and grey water are all folded into life cycle analyses intended to quantify the total environmental impact of producing a bottle of any given wine. They’re also measured via “water footprint.” Your personal water footprint is the amount of freshwater you consume going about your daily activities, including the water needed to produce all of the apples and toilet paper and wine you consume. A winery’s water footprint is the freshwater the business as a whole requires; ditto on the scale of an individual bottle of wine. In ideal settings, a vineyard can actually have a net negative water footprint if its green soil water stays at baseline from year to year and if its blue groundwater is being replenished by ample rain. Aiming to use more green water is part of agricultural sustainability efforts; using rain more efficiently can increase the amount of crop you can grow without draining environmental resources since rainfall can be counted on to replenish soil water. Unless you’re California, or anywhere else suffering a drought, in which case you’re using all the blue water you can (legally) reach and life is kind of miserable. 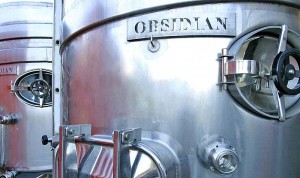 Waiheke usually has enough water of both the green and blue varieties, even without help from Auckland. Annual rainfall measures about 100 cm, or 39 inches, or 3 inches more than the average annual for Portland, Oregon. Mudbrick, a very beautiful winery on the shiny half of the island, collects and filters the rainwater that drains off of their roof, the same strategy used by most private residents on the island. Stonyridge, another high-fashion winery not too far down the road, has a private tap on the underground aquifer. Those strategies are enough most of the time, but private water companies sell water out of tanker trucks (from their own private aquifer taps) if you run short. Occasional droughts have seen residents not flushing toilets and buying drinking water from the grocery store, and seen the water salesmen maxing out their legal aquifer allocations. Those, thankfully, are rare occurrences.

Despite more rainfall than the northern Rhône with which it’s sometimes compared, Waiheke is coming to find its calling card in Syrah, though the Bordeaux-style blends for which it has largely been known in the past are still going strong. Producers like Mudbrick and Stonyridge have found what is in many ways an enviable business model reliant as much (or more) on the restaurant and wedding trade as on the wines themselves: if the wines are less than optimally adventurous, they still routinely sell out of vintages before the next is ready. Waiheke is still exploring what works best in its moist island climes, but daytrippers and wedding parties are going to keep the demand for easy-drinking styles high.

Mike Wood, winemaker and general man in charge at Obsidian (whose rainwater-fed cistern holds 7,500 liters), lacks five-star architecture but gets to experiment more and keeps dedicated vineyard space – unirrigated, as are all of the island’s vineyards –  for trials on new varieties. He’s still trying to decide how he feels about the tempranillo and the montepulciano, the latter of which he laughingly calls “rustic.” Rustic isn’t always a bad thing, and that I’d happily take a glass next to anything with tomatoes and basil is saying something given my typical ambivalence about Italian food (yes, I know). In general, Wood’s whites are generous and his reds restrained to good effect on both accounts. The 2014 pinot gris, a variety that’s definitely sticking around, was an unexpected pleasure for showing plenty of varietal character between a beautifully floral nose, unctuous texture, and spicy mid-palate. The 2013 syrah was light, bright, and fresh with just enough pepper and tannin to say hello to something like a grilled lamb chop. I’d even call it thirst-quenching. Which, on an island with water, water everywhere but sometimes nary a drop to drink for a tramper with an empty water bottle, is a lovely thing.