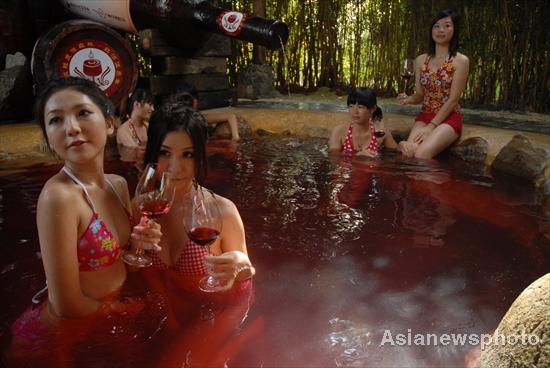 Wine Bath and Beyond

“That wine has been in the bath room for one week, and you is the thirty-eighth person that bathed in it.”

A story about bathing in wine was first published in 1859 in numerous U.S. periodicals. Variations were republished over the next three decades. At first blush, it seems a good yarn replete with Mark Twain dialects and mildly racist antebellum humor.

The original story relates that an American tourist in Paris saw a sign advertising a ‘wine bath.’ Curious, he took the bath, which cost seventy-five cents. He wondered how a wine bath could be so cheap. He knew the bath’s attendant who had been a slave in Virginia but in France was a freeman:

“Well I suppose they throw it away when they are done with it?” replied the tourist. “Oh no, they send it down stairs for the poor people, who bathe for twenty-five cents,” replied the bath attendant. “Then of course, you throw it away,” exclaimed the traveler, “who thought this was going even beyond Yankee profit.” “No, indeed,” was the “indignant reply, accompanied by a profound bow; “No indeed, we are not so ‘stravagant as dat comes to; we just bottle it up den and sends it to ‘Merica, for champagne!”

An 1890 article by Shirley Dare in the Pittsburg Dispatch reveals that certain “California beauties know the tonic effect of wine baths.” The girls bathed first in warm water and when their pores were opened “they enter a wooden tub containing a cask of red wine [for fifteen minutes] which does duty over and over again.” Miss Dare writes: “The wine bath is very refining and refreshing to the skin.”

A 1902 article in the St Louis Republic advocated that “for the wealthy a wine bath is recommended.”   The article claims a twenty minute bath in “100 liters [26.5 gallons—the average bathtub holds 24 gallons] of Malvoisie wine can be used a hundred times without losing its invigorating properties.” The article continues, “[after which] the Malvoisie may be distilled, and the result will be found to be a delicious brandy.” The previous year, Malmsey [Madeira] was the preferred variety—“It takes a hundred quarts of the wine for a bath… [which] is poured back in the barrel and used over again for the next bath.”

By 1910, external wine applications were the vogue. A popular French technique was to wash the hair occasionally with wine—“white wine for blondes and red for brunettes.” A 1911 article, though, suggest wine baths were still around but because “so few women could indulge in such extravagance,” the article suggested women “sponge [their] faces in wine,” red or white was fine but the author touted “sour claret [as] especially beneficial” for the complexion.

Wine baths of a sort are still in vogue today. A recent Huffington Post article suggested wine baths were beneficial but a modern wine bath consists of adding a mere 16 ounces of red wine to one’s bath water. Les Sources De Caudaliewhich claims to be “the first wine spa in the world,” extolls wine baths as part of their new vinothereapy “which involves being wrapped, massaged and smothered in extracts from some of France’s finest wines.”   The Bordeaux, France spa offers a “hot red wine bath fitted with strategically placed jets designed to boost circulation.”   The bath is actually water “enriched with red wine extracts.”   They also offer a “Barrel bath” which they describe as “bubbly and enriched with gently exfo

liating grape marc [pomace].” A reporter who examined the spa writes, “Although many dermatologists agree that red grapes can play a role in preventing serious diseases such as cancer when eaten, they remain skeptical of claims that the body can absorb anti-ageing chemicals and affect its appearance.”

Susie Leung of Absolutely Fobulous discovered a red wine spa in China which does have a communal red wine bath and she wondered “can just sitting in wine even have any health benefits?” She wondered, “How often are they going to change the bath water?” She never thought to ask the real question—will the wine be reclarified and bottled—because today the thought is simply out of the question. But is it?