Give me a word beginning with “N”

Is there a single word that’s caused more controversy and argument amongst wine connoisseurs/geeks/lovers than “natural”? At least recently, I doubt it.

The debate about “natural wine” has raged for a good few years now. During that time, zealots and detractors have nailed their colours to the mast so frequently in some cases that it’s a wonder there’s anything left to nail.
Just when it all seemed to be dying down, ex-Wall Street Journal writer Bruce Palling posted a crass piece of lazy journalism entitled “Why ‘Natural’ Wine Tastes Worse Than Putrid Cider”. Why lazy? Because this was the same argument that we’ve had for over four years now – “there’s no such thing as natural wine” or worse “all natural wine is faulty wine”. Both statements are questionable if not laughable, and in any case the wine world has moved on. 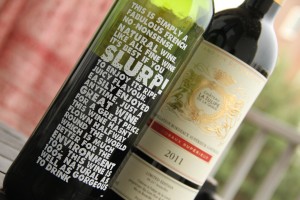 My own recent experience writing about this rather cheeky supermarket wine packaging showed that few can agree on the definition of that pesky word. The comments in particular threw up an array of possibilities: “nothing added”, somehow related to organic, “a feeling”.  The question in my mind was “is there a textbook definition that applies to wine?”.

Merriam Webster gave me this:

nat·u·ral adjective \ˈna-chə-rəl, ˈnach-rəl\
1. existing in nature and not made or caused by people : coming from nature
2. not having any extra substances or chemicals added : not containing anything artificial
3. usual or expected

Well, number 1 can safely be ruled out. Natural wine clearly can’t be defined as vinegar – no matter how much its detractors might want. But number 2 is pretty accurate – fermentation occurs naturally, so no selected yeasts, no fining or filtering agents, no added tannins or grape concentrate. Technically this would also preclude the addition of any added sulfur – a perilous path which some winemakers are nonetheless learning to tread in an accomplished way.

Number 3 is the problem area. Here’s the reason that processed food or soft drink manufacturers will argue that its OK to use the word for their “basic” or “unflavored” products – even if they are as manipulated as hell and light years away from definition 2.

Why should anyone care about this? Does it really matter if marketeers or wine producers play fast and loose with terminology and with the “n” word? I think it does, for a very simple reason.

The 21st century consumer is engaged in an unwitting battle with retailers, advertisers, marketing and PR agencies – who erect effective obstacles to that right. If you really want to find out how the liquids and comestibles that you ingest are produced, you have to go head-to-head with one of the world’s most powerful industries – one that is increasingly engaged in restricting access to such information.

Most of us give in with nary a whimper. So what if your “farm fresh eggs” actually come from a horrific battery facility with crates barely bigger than the hens, or if a ready meal claiming “low salt” and “low sugar” turns out to be anything but. Tough luck if a mass marketed wine utilizes the same “natural wine” buzzword as a small artisan producer. Can we do anything about false and misleading claims? Just roll over and buy what the food and drink giants want you to buy?
Actually, people do complain, and sometimes things change. Danone tried very hard to launch a probiotic yogurt under the brandname “bio” in the 1990s – but since that term carries very strong associations with organic production in most European languages, the corporation was forced to rebrand it as “activia” to avoid litigation from the EU.

It might be too much to hope that the word “natural” will ever be legally protected in the same way as more concrete terms such as “organic” or “biodynamic”, but that needn’t stop the wine industry from developing its own standardization.

But what does it all mean?

An argument I hear a lot is that “the consumer doesn’t understand or care what goes into wine” – as if this is the justification for abandoning all hope, for shrugging our shoulders and accepting that we can’t protect what goes into our wine any more than we can stop banks stealing our money or governments making poor decisions.
Once upon a time, consumers didn’t know or care about free-range eggs, pesticide residues on their vegetables or GMOs in their food. Many still don’t, but there is a sizeable segment who do, and a corresponding market sector that services their needs.

Wine shouldn’t be any different – the emergence of “natural wine” as a category for people who share a similar concern for how their beverages are manipulated is, well, perfectly natural. But, it only gains real weight if its integrity can be protected and guaranteed.

It’s quite possible that more rigor around the term “natural” would help improve overall standards in the sector – there are always bandwagon-jumpers who deserve to be outed. This brings me back to my seemingly irrelevant and obtuse first point – definitions are worth fighting for, worth hammering out, worth pushing past those whose only response to emerging trends is to mock.