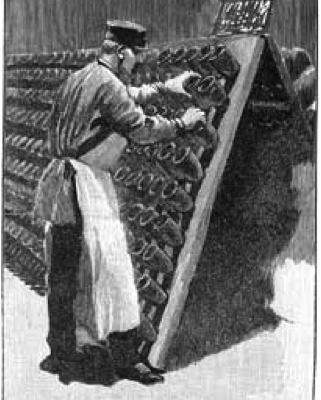 Blast from the Past: Explosions and Sponges in Old Champagne

“The Frenchman’s face was hacked and notched,” was the beginning line of a newspaper article that appeared in much of the world’s press in the summer of 1906. The old man’s scars were so prominent that they sparked questions from passersby—one of whom asked him if he was “a duelist?” The man’s response was that he “was a champagne maker” in Reims and that the “honourable nicks” were “champagne scars.”

The scars, he claimed, “decorated the visages of all the workers in the underground champagne mills of Reims.” It was in these caves that champagne bottles burst “as the turners move along the racks—each turns 35,000 bottles daily—they are continually saluted with explosions,” the old man continued. When the explosions occurred “Bang! And the glass splinters fly, and a little fountain of champagne perfumes the air,” he added. Several million bottles were turned every year in the miles and miles of caves cut into solid limestone rock where the temperature averaged 45 degrees Fahrenheit. The Frenchman claimed that about “one bottle out of every ten bursts” during the secondary fermentation process.

At the time the bottles were turned by hand, fifty times in all, during the tirage process. As the champagne aged, the sediment “mounted up and concentrated itself about the cork.” The corkers then removed the cork and the sediment which had collected around the neck of the bottle would blow out when the workers would “skillfully replace the cork again.” The procedure called mise sur pointe involved placing the bottles neck “downward at a depth of three inches in a refrigerating mixture which causes an icicle to form in the neck”—the icicle then blew out when the corkers removed the cork.

“The workers down there smell nothing but champagne all day long, champagne escaping from burst bottles, and as the turners move along the racks, they are continually saluted with explosions,” the Frenchman explained.

“The corkers’ and turners’ work is dangerous. These men are nearly all scarred like me,” he concluded.

A year later the world learned that the Reims champagne mills had developed a new process to protect the workers and salvage a good part of the burst champagne. A 1907 article in the Lafayette Advertiser noted “champagne makers of Rheims buy a lot of our sponges, said a wholesale dealer.” In an effort to save the champagne which “breaks the strongest bottles,” according to the article, “they pack the bottles in clean sponge[s], and every day or two they go over the plant, and if any of the bottles have broken, they squeeze into casks the wine that the sponges have retained.” The casked wine was “reclarified, refined and bottled again [which made] a very good second quality drink,” the sponge wholesaler told the reporter. He estimated “in a year’s course, 1,000,000 bottles of champagne” was being wrung out of the sponges.

While some champagne makers still manually riddle, many have abandoned it because of the high labor costs and product loss. Automated riddling machines (gyropalettes) are used in their place. Modern disgorgement machines have replaced the “corkers.” The sediment is frozen in the neck of the bottle and the plug of lees is removed mechanically, a small dosage of liqueur d’expédition is added and the bottle corked.