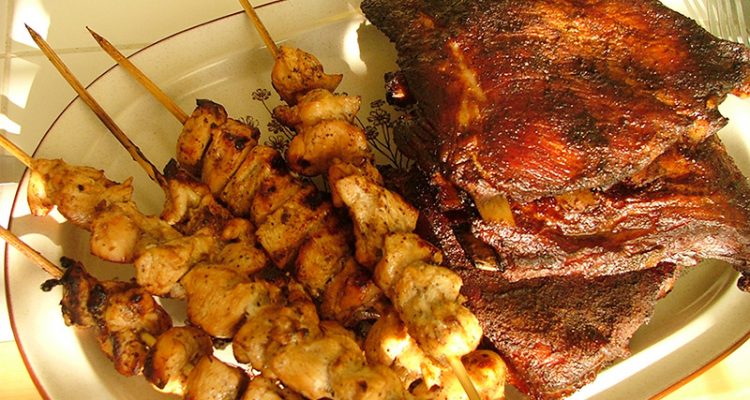 Medium bodied, fruit-driven white and red wines, e.g., Beaujolais, Merlot, Pinot Blanc, Viognier, and New World Pinot Noir, are also reasonably versatile, taking one through the cocktail hour—when they might be drunk by the glass with very little food—to the table, where they’ll pair with a range of fare, especially American cuisine. 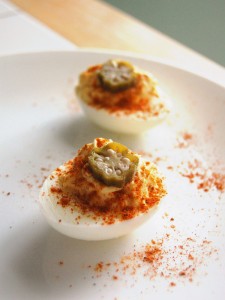 I had an odd moment in New York City a few months ago. A lot of wine bloggers had come together from across the country, and on Sunday morning, everyone chatted about what they had for dinner the prior evening. A few started raving about the deviled eggs at a southern-themed restaurant. I was intrigued, and asked how they were made–topped with salmon roe like the best ones I ever ate, or maybe garnished with a slice of hot pickled okra like I make them at home?

No, the answer was that they were pretty standard deviled eggs. But I wasn’t dismissive. If I had never tried them until I was an adult, I would be equally ecstatic about the experience. And my next thought was about how much I would enjoy a cold, crisp Albariño with a half dozen of my mom’s homemade deviled eggs.

There are no established rules for pairing wine with southern fare, since our founding influences are British and African and beer is much more commonly consumed. Dry counties still abound, and Mississippi didn’t repeal statewide Prohibition until 1966, not leaving a lot of time for the development of a wine culture. (Except, of course, the homemade fruit wines, wild muscadine wine, and interesting rarities like corn wine that tie into the moonshine/whiskey tradition. But that’s another story for another day.)

“Southern” covers a fairly wide range of cuisines, but let’s focus on the food around the Mississippi Delta and Memphis, my lifetime home. The first thing that most people associate with this area is pork BBQ with a sweet molasses sauce. Shoulders, ribs, and even whole hogs are smoked for twelve hours or more. The creosote built up on the bark (the dark and tasty edges of the meat directly exposed to the smoke) will numb your taste buds and change your wine tasting abilities. It doesn’t mean that you can’t taste anything, but forget subtlety. 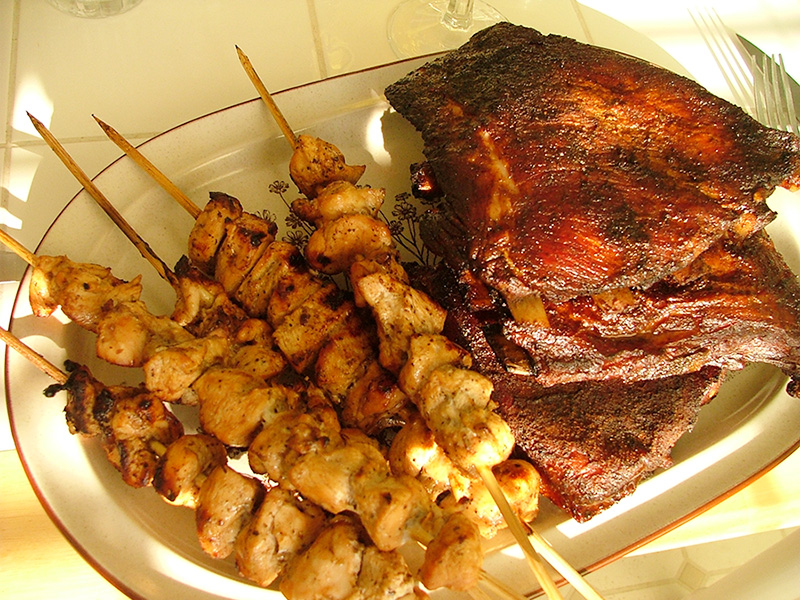 This presents you with a special opportunity: take a young and brash Cabernet Sauvignon, or a powerfully strong Tannat, or something made entirely from small dark grapes like Petit Verdot, Cabernet Franc, etc. When you taste these wines with a modified palate, the tannins are completely erased and you can focus on all of the other aspects of the grapes. Imagine listening to a symphony, and then hearing it again without the percussion section. It’s not necessarily better or worse, but it gives you a much different perspective. A gentle Pinot Noir will just taste like water.

The combination that I’ve had the best success in spreading to friends is fried chicken with sparkling wine, which is also a great way to convince people that bubbly is not just for special occasions. A $10-15 bottle of Cava or Prosecco goes so well with this dish that has become ubiquitous across the United States (yet too often made poorly and without love). If you’ve never had chicken fried in a giant cast iron skillet and drained on brown paper bags, you’ve never had real fried chicken. A sparkling wine with crisp acidity will cut through the grease and the bubbles will enhance the experience of the spices. I often serve a slightly fizzy Vinho Verde in such casual settings and lovingly refer to it as grape soda.

Collard greens and a little sweetness

Other pairings require really thinking about the ingredients. Slow-cooked collard greens are amazing, often with a smoked ham hock thrown in the pot for flavor and texture. Such a dish born out of poverty would never be associated with wine, right? Maybe it would if you had it in Italy and the rapini had been wilted down and seasoned with diced guanciale. Bitter greens can benefit from something with a little sweetness, so break out the Moscato and Riesling. No need to go overboard with a late harvest or botrytized wine, but it’s a chance to explore the idea of balancing the wine characteristics against the food. I like a lot of pepper vinegar with my greens, so I will select a wine that is lower in acidity.

The wine culture around here is still growing, but that growth is strong and steady. No longer am I hosting a wine tasting out of the back of my car with my father and uncles. Instead I’m expected to bring the wine to family gatherings. Local chefs have used our diverse local ingredients in new gourmet menus, paired with eclectic wines from around the world. You may be surprised at how well tender little lady peas go with Moschofilero. Above all, it’s exciting to be down here during this time. None of us were around when oysters were first served with Sancerre, but every day I have the opportunity to try a new food and wine marriage and share what works.

[author] [author_image timthumb=’on’]https://palatepress.com/wp-content/uploads/2013/08/BenCarter.jpg[/author_image] [author_info]Ben Carter is a lifelong resident of Memphis, Tennessee who has been writing about wine, food, and related topics since 2005 at Benito’s Wine Reviews. He contributes regularly to The Commercial Appeal newspaper through online wine tastings and the “Southern Tastes” panel of local food experts. In addition, he writes as the Memphis Correspondent for SeriousEats.com, covering local restaurants and cuisine. He is committed to the growth of a strong and energetic wine culture in the southeastern United States.[/author_info] [/author]