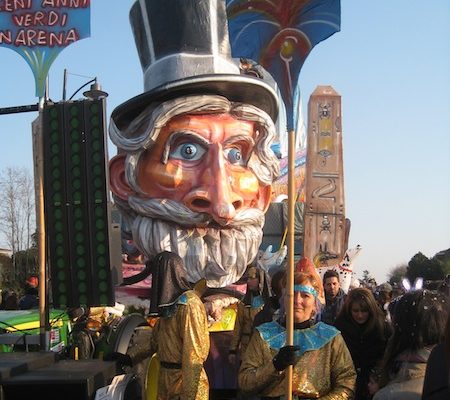 Carnival in Italy, a Festival of Wines and Foods

Every region in Italy is its own small world, with distinct customs, traditions — even local languages which can have different tones within a few kilometers — and their own distinct cuisines as well. During the year, various regional events celebrate the richness and range of Italian foods. The most significant occasions are holidays such as Christmas, Easter and the celebration of the saint patron of a town, a village or even a big city.  And a pagan festival such as Carnival is also celebrated at the table with great pleasure.

Carnival is a festival which is observed especially in traditionally Catholic countries, because it is the period from Epiphany (January 6) to the beginning of Lent, and these celebrations have roots far back in time. They probably derive from Greek festivities like Dionysian feasts in honor of the god of wine. During those festivals, the normal social order was overturned: the slaves could act as free men, all manner of jokes were allowed and people ate and drank with no limits. They also wore masks to hide their identities, often pretending to be someone else.

During the Middle Ages and the Renaissance, Carnival time was also celebrated in European royal courts with dance, music and theatrical performances. The parties lasted for many nights but, as tradition dictates, they ended before the beginning of Lent with one last, great feast. For this reason, it is theorized that the word “carnival” comes from the Latin carnem levare (to remove the meat), a reference to the ban on eating meat during Lent.

Hundreds of towns and cities celebrate Carnival, each in its own way. Some of them are renowned for their antiquity or for their grandeur, or beauty. But anywhere, anytime, during Carnival, you have the opportunity to taste foods that are not usually cooked during the year. Often the foods are sweet but they can be savory dishes.

In Verona for example (where I come from), we celebrate one of the oldest carnivals in the world, and the undisputed “king” of all the festivities is a funny old man, considered the oldest mask of Italy and Europe for which we have records: his name is Papà del Gnoco, “the Gnoco Dad.” This year, Verona celebrated the 483 election of a Papà. The gnocchi (pronounced nee-okkee) are a typical Italian food: here, they are potato based and traditionally people eat them with a tomato sauce, or with a tomato and meat sauce called pastisada typical of Verona. (Pastisada means “burnt donkey,” a reference to an ancient battle event in this area.) 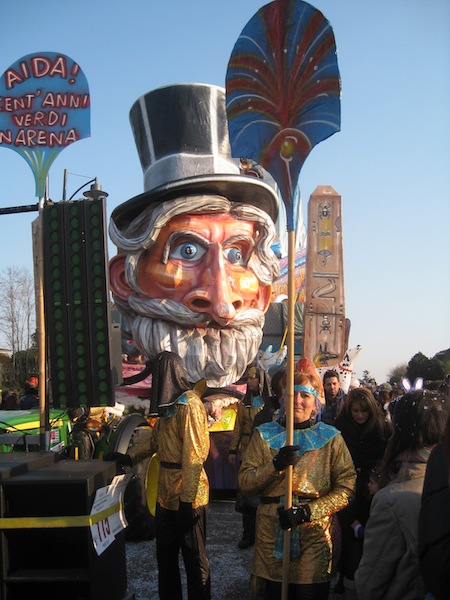 The highlight of Carnival time in this city is a big parade of floats and processions of masked people, called the “Bacanal of the Gnoco.” The Papà del Gnoco opens it, riding a mule and giving candy to the children and packages of gnocchi to the adults. As often happens in Italy, the Papà del Gnoco has his origins in a historical event; in this case one that occurred between 1520 and 1531. In those years, the people of Verona were suffering form a terrible famine. One day, in 1531, a maddened crowd prepared to attack the bakers of the San Zeno district for their supplies of wheat and bread. To prevent the revolt, some wealthy citizens decided to feed the poorest inhabitants on their own expense. One of these benefactors was Thomas Da Vico, a physician who, on his death, willed the poor an annual distribution of  San Zeno flour and butter.  With these ingredients, people made their gnocchi, and even now you can find gnocchi made only with flour, and cooked in hot butter. Thus a tradition was born: every year, on the Friday of the week preceding the beginning of Lent, in Verona and its surroundings, families eat plates of homemade gnocchi (though they are usually made with potatoes now) and served with tomato sauce. The accompanying wine is red of course, usually Bardolino or Valpolicella. Nowadays this traditional meal is still very popular.

Another typical dish eaten this time of year — particularly during Lent — is Baccalà con la Polenta or “Cod with Polenta.” The polenta can be served either creamy (made in a pot on the stove) or roasted on an open fire. This food is perfect with a glass of white, slightly aromatic Custoza, or a sparkling Durello. 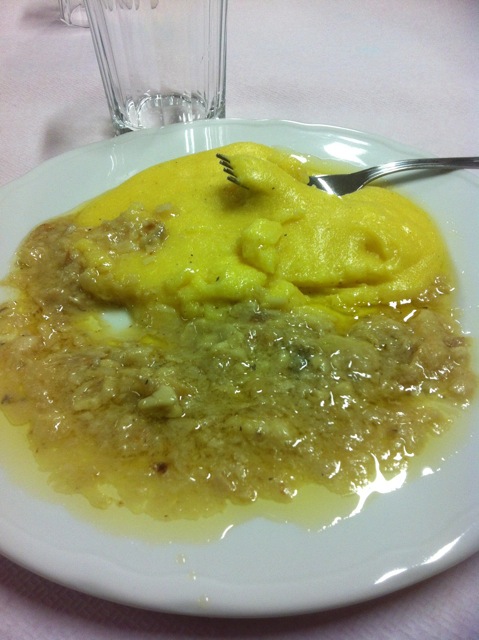 Clean any bones and scales from the cod, then chop it and roll pieces in flour. In a casserole, place the chopped onion, the olive oil and anchovies, and sauté until onion is translucent. Add the cod with the hot milk, salt and pepper. Stir frequently until milk is completely absorbed. The secret is in the slow cooking: at least four hours. Serve it with a nice crispy hot polenta, or a creamy polenta (like in the picture).[/box]

Another historical carnival takes place in the Piedmont town of Ivrea, where it is common to make a very tasty dish with beans: faseuj grass, or “fat beans.” It is said that in the Middle Ages the nobles starved the people of Ivrea with high taxes and other abuses. However, once a year they would to distribute legumes and dried beans to the poorest families.  But the proud inhabitants of Ivrea, although they were starving, refused to accept the humiliating alms, and took the nobles’ beans and threw them in the streets.  Today beans are the main ingredients in traditional dishes not merely in this city, but in the entire area – presumably grown by the people, and not donated, of course. 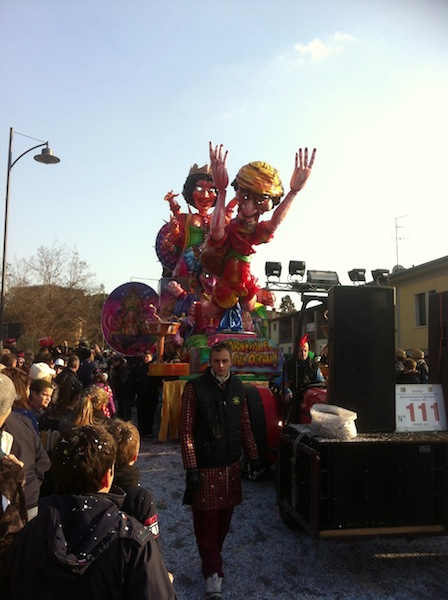 The original recipe required lengthy cooking (at least six hours) in a terracotta pot placed on a wood fire outside; nowadays it’s easiest to use an electric slow cooker. The wine that traditionally accompanied this dish also is unique: it is a mulled wine, a red wine heated with sugar and spices.  But we can replace it with a Carema DOC (red wine with intense aroma, smooth and persistent, aged two years in oak or chestnut), or a Barbera, or even a Dolcetto.

But the most emblematic foods of the period of Carnival are definitely sweet. Some of them are eaten all over the country, albeit with different names and in slightly different forms. One of these is Castagnole which is easy and quick to make. It is delicious to eat, along with a glass of sweet wine, usually white, like a Tuscan Vin Santo, a Moscato d’Asti from Piedmont, a Fior d’Arancio from Venetian Colli Berici, a Recioto di Soave or a Sicilian Passito  di Pantelleria. 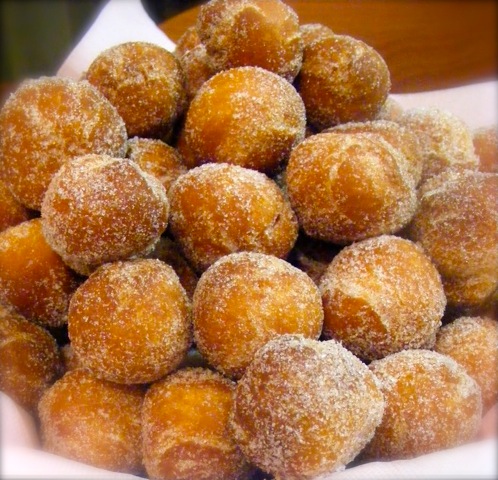 Soften the butter in a bowl, beat in sugar and then the eggs, one at a time. While stirring, add the grated lemon peel, a pinch of salt and enough flour to make a soft dough. Sift in the baking powder. With the dough, form balls the size of a walnut. Fry them in hot oil until golden. Remove with a slotted spoon and dry on paper towels. Sprinkle with sugar and serve with a glass of sweet wine.[/box]