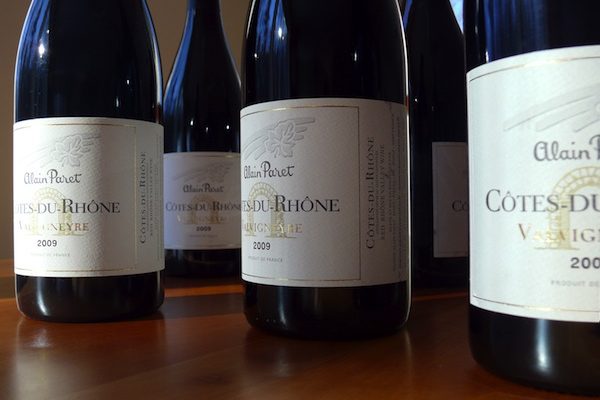 There is a small fraternity of bottles that have, over the years, ebbed and flowed as my family’s house wine. They’re mostly red—Côtes du Rhône, Vacqueyras, Barbera, Valpolicella—plus a little white and rosé. All are under $20, and even cheaper by the case.

These are table wines, drunk with meals in the thrumming engine of daily life. But I still try to pay attention to them, to give each one its due after our “Cheers!”

I swirl and smell, then taste. I drink. 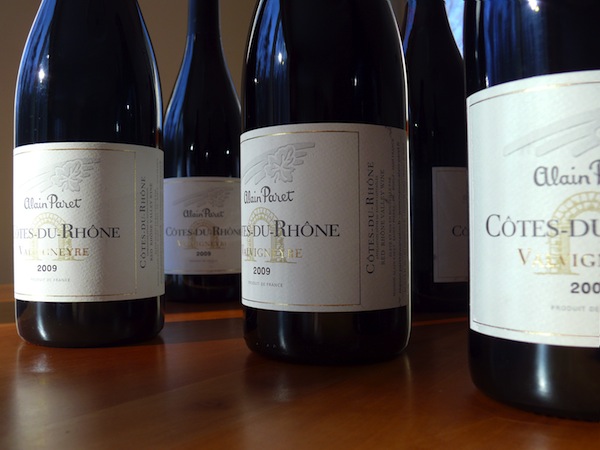 Over time, with repeated enjoyment, each wine blooms into my memory, becoming fixed and vivid. Its flavors are now as distinct as food memories from childhood, like a Pippin apple with its spicy flesh and cakey texture, or the way a Northern Spy snaps and spits when bitten.

This Côtes du Rhône is peppery, the other is meaty. This Spanish red has terrific zing, but it’s supple like that Barbera we had last night.

I like writing about wine partly because I like the riddle of describing the ineffable. And if I’m to write thoughtfully, sympathetically, and comprehendingly about a wine, I need to experience it within the vessel of my life. I need to drink it, and more than just once.

This is not how most wines are professionally tasted. A preponderance of wine writing derives from a mere sip and spit. There’s no chance to see how the wine evolves with air, and no food in sight. The wine is treated as a specimen in an artificial circumstance. It’s an in vitro approach, literally “in the glass.”

A wine’s broad features can be divined from a single taste, of course: it’s a little young, it has seen some oak, its dominant flavor is black berry fruits. It’s like noting the most striking characteristics of a new face: high cheekbones, raven hair, aquiline nose, pale lips. But next time we meet, the new face might be smiling, or might seem shy. It’s one thing to describe a person’s profile, and another to describe his personality.

Sampling a full bottle of wine is better, because now there’s a chance of treating it as a beverage rather than a curiosity. The tasting can also take place within the living ecosystem of the taster’s life—in vivo, if you will.

But if a sip’s not a trope for a bottle, a bottle’s not a trope for the wine. Palates vary, and even when my own palate’s fresh, my experience depends on whether I’m rested or tired, hungry or sated. My impression might likewise shift if I’m in a noisy bar, or the cathedral of my kitchen.

Expectation also plays a role, and quantum mechanics provides a metaphor: the observer as part of the system being observed. Thea Dwelle recently wrote about her experience at a blind tasting at Ridge Winery in Cupertino, California. The final flight stumped the panel. The first bottle seemed juicy, with red berry fruit; the second was fuller, with spice and floral notes; the third one tasted of pomegranate. The reveal? Three bottles of exactly the same wine.

Bottles do vary, though I expect Ridge staff had been vigilant about bottle variation in setting up the tasting. Still, anyone who’s purchased a case of wine and proceeded briskly through it knows that while most bottles are recognizably the same wine, one or two might seem off. Sometimes a bottle’s obviously flawed, spoiled by cork taint or oxidation. Here, ethics dictate a writer sample another bottle. Recently Steve Heimoff rightly called out a wine blogger who’d pilloried a wine, then conceded he knew the bottle was bad.

Sometimes, though, a wine seems sound but muted. A week ago I opened a bottle of Bonny Doon Vineyard’s 2007 Le Cigare Volant, a wine whose contours I know with great filigree of detail, having befriended it when I worked in marketing for the winery. That particular bottle seemed numb and simple, as if it had retreated into a quiet corner. Perhaps the wine’s entering a dumb phase and needs more time. Had I not known Cigare well, I might have declared the wine ordinary. But it’s not an ordinary wine. I know what it tastes like, from repeated experience. 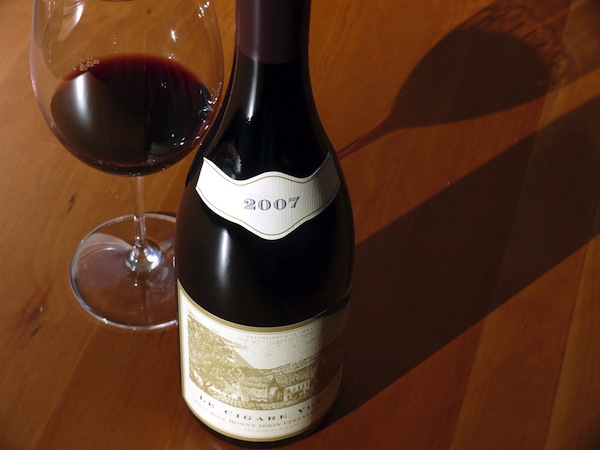 And more than that, I know what Bonny Doon tastes like. Over two or three years, I have tasted, and committed to memory, the wild extravagance of the winery’s output. And knowing all of these wines lets me hold them in mind, reflect on them, and discern the filaments of similarity that weave throughout them.

Here’s another example, more focused and penetrating. About two years ago, I toured Germany’s Mosel, Pfalz, and Rheingau regions, a guest of the Deutsches Weininstitut. Our small group of writers trooped gamely through five or six wineries a day, tasting flights of eight to ten wines at each, for over two hundred wines in four days. The constant in the equation: Riesling, in all its Prädikats. The variables: vineyard, winegrowing, winemaking, and, to a lesser extent, vintage.

It was a kind of baptism by grape and brimstone, a quest for ur-Riesling. I’d sit down to a tasting at a new winery, a flight before me from dry to sweet, trocken to Trockenbeerenauslese, and think, So, what does this place taste like? Is it slatey or tropical, austere or creamy? What is the taste of the winery, its house style, the aesthetic?

True, this was mostly an in vitro exercise, a swirl or two of each wine before sip, spit, and dump. But sensibly—relentlessly!—our hosts also served us Riesling at lunch and dinner, a wine with the cuisine that had evolved alongside it, fitting the wine into the framework of the culture.

Which is, of course, how we have for centuries come to understand our wines: regionally, regularly, communally, in context.

And so we have advanced to the precipitous edge over which wine writers peer daily. A critic can, through long exposure, develop an expansive palate memory. But the opportunities for this deep experience are as rare as they are precious, and the formal exercise of sip-and-spit remains the dominant paradigm, despite giving short shrift not only to the wine, but also to the winemaker, the vineyard, the region, its culture, and, ultimately, the reader.

So here’s an idea, thoroughly impracticable (not to mention completely unaffordable), but one that could remake wine writing into a far more vital exercise: drink five bottles.

I’d taste the first in my usual way, gathering information about the vineyard, winemaker, the wine’s stylistic aims, its native habitat. I’ll open the bottle and give it some air, if I think it needs it, then proceed through my standard evaluation, making notes on color, aromas, palate impressions, texture, flavor, and finish. I’ll taste it first without and then with food, and with any luck I’ll have devised a meal for us that will pair well. I’ll save some of the bottle for the next day, and repeat with what’s leftover.

I’ll taste the second bottle with different meal, on a weeknight, a week or two later. This time I won’t obsess or fetishize. I’ll simply open the wine, swirl, sniff, sip, and drink it with my food and with my family. But again, I’ll jot some notes.

The third bottle? I’ll try to get someone to serve it to me blind, but still with food. Before the unveiling, I’ll write up my thoughts, and afterward see how closely these matched my earlier observations. 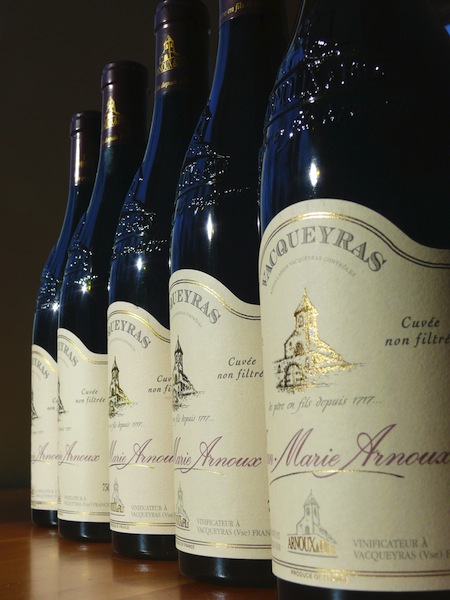 A few weeks later, I’ll open the fourth bottle, tasting it much the same way I’d tasted the first, giving this particular bottle of the wine its due assessment.

Finally, I’ll taste the fifth as I had the second, viz., casually, with meals, with friends and family.

By now a month or so has passed, and I will have experienced the wine twice under rigorous scrutiny and three times under more casual circumstances. I’ll have a sheaf of notes and a sense of how the wine has behaved with me, and I with it. I’ll be able to conjure its character the way I can remember the face of a friend. I’ll have become familiar with the wine not as part of a tasting exercise, but as part of my life. Wine incarnate. Wine made flesh.

Maybe another writer would need only three bottles to attain this depth of understanding. Maybe another needs twenty. I don’t know. But I do know that wine writing would change dramatically if every writer drank through five bottles of a wine, in vivo, before passing final judgment.

This will never happen. But it should.