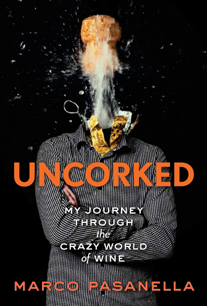 Uncorked: the Many Journeys of Marco Pasanella

Marco Pasanella’s life is filled with more drama than most of us experience, and no doubt there is ripe material for a book. The problem with Uncorked is that it suffers from an identity crisis. Is it a memoir? A stirring drama? A how-to on building the retail store of your dreams? A cookbook?
In the end, Pasanella’s book tries to be all of those things, and it suffers for it. Perhaps Pasanella and his publisher felt the need to conform to conventional book length standards. He could have learned from wine importer Terry Theise, whose book Reading Between the Wines is one of the greatest wine books ever written — and checks in under 200 pages, a svelte, focused powerhouse.
And yet I feel compelled to recommend Pasanella’s book to friends who are intrigued by the wine industry, simply because there is a good deal of interesting material here. Pasanella writes very well, which makes the book a breezy read.
The strength comes from the story of how Pasanella built his impressive wine retail shop. He is the rare business success in the wine industry who went in with no experience. I deeply appreciated his detailed telling of how he built the business, from the hiring of a wine director to applying for permits to dealing with New York bureaucrats. I don’t need oversold personal drama; this is the meat of the story, and it’s a good one.
In fact, Marco Pasanella’s success is a reminder that wine shops can succeed through force of will, so long as it’s coupled with creativity. He tries many ideas, and many fail. He embraces failure as a way to learn. As a result, he improves his business and his customers benefit.
Through Uncorked, we learn what wines pay the bills (cheap pinot grigio), what makes running wine shop events so challenging (constant government meddling), and how distributors grease the skids into wine shops (free $200 bottles for the owners can’t hurt). Uncorked is engaging when it lays bare the daily struggles of making this business a success.
But Pasanella clearly wanted readers to become emotionally invested in his family’s success, and the book is uneven on that score. Here’s a guy who has become tight with Martha Stewart, who owns a waterfront building in Manhattan, whose family has a Tuscan estate, and who parks his 1967 Ferrari 330 GT in the middle of his store as a prop. It’s hard to believe he was ever that close to ruin.
There are moments when Pasanella seems to stretch the notion of drama, simply for effect. He concludes one chapter with the story of his store’s rising success culminating in a rocking holiday party. He writes that he found himself enjoying the setting—”That is, until I saw who Janet was kissing in the back corner of the enoteca. ‘This,” I thought, ‘could change everything.'”
Not to spoil the surprise, but Janet was an employee and there is no big payoff coming. It changed nothing. It hardly mattered.
True wine geeks will also struggle with repeated factual errors in Uncorked. Chave is a legendary Rhone producer who makes Hermitage, not the much lesser Crozes-Hermitage. JJ Prum is a riesling producer in Germany, not Austria. Giuseppe Quintarelli is iconic for his Amarone, not his Barolo. Burgundy does not need “French” as an adjective. Sure, it’s pedantic, but the errors will trip up the wine-obsessed. Oh, and I’d like to talk to Pasanella’s editors about the repeated misuse of “varietal”…
When some of the chapters seem to drift, Pasanella does reward readers with a nice bit of prose. I particularly loved his commentary on why he has little interest in malbec from Mendoza: “To sip most Malbecs is to be charmed by a South American playboy’s stories, only to realize that he really has only one lovely anecdote repeated over and over again.”
Perhaps you’ll enjoy the many recipes Pasanella drops into the text. I found them to be clutter. He closes with a bizarre series of lists, including the “Ten Strangest Words in Wine.” I don’t fully understand his reasoning that “cat piss” is definitionally positive; he says it’s used by wine nerds to be racy. Also, “rising bread dough” in Champagne is not necessarily negative. And his list of how to give toasts seems condescending instead of helpful.
This is five pounds of book in a ten-pound bag. But if you can tolerate the unnecessary weight, the five good pounds are worth reading.
Marco Pasanella, Uncorked: My Journey Through the Crazy World of Wine, New York, Random House, 2012, 224 pages.
[author] [author_image timthumb=’on’]https://palatepress.com/wp-content/uploads/2009/11/evan.jpg[/author_image] [author_info]Evan Dawson is a news anchor / reporter at the ABC News affiliate in Rochester, NY. He has reported on public policy and politics for more than 10 years. He is the Managing Editor of the New York Cork Report, as well as the author of the critically acclaimed Summer in a Glass: The Coming of Age of Winemaking in the Finger Lakes.[/author_info] [/author]
Post Views: 436