Cognac, the village and the AOC, is a quiet pastoral place. The village bustles at times, but primarily as a business hub and central marketplace for a largely rural community and only secondarily, it seems, as the world center for a unique iconic style of spirit. Outside of a relatively few stately buildings showcasing the great Cognac Houses the scene is rather pastoral. 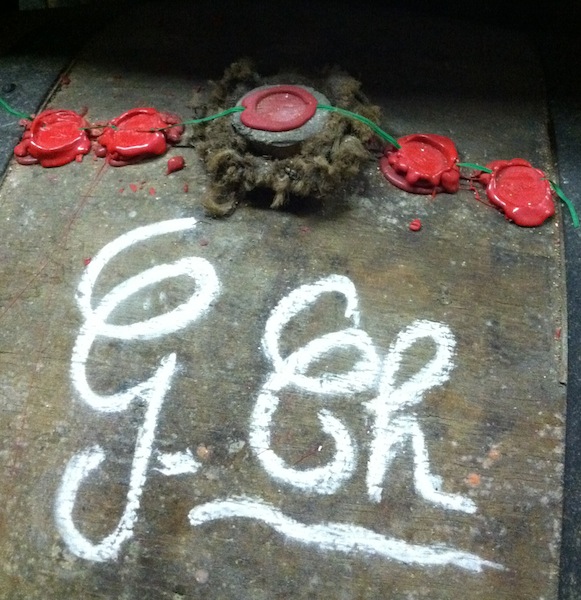 The surrounding countryside is even more bucolic, with the villages smaller, the open spaces of field and vineyard larger, and the occasional rumbling harvester or tractor slowing things down to an agricultural rhythm.

Drive to nearby Jarnac, the “other village” of Cognac, and it gets even quieter.

Cross over the Charente there and you have the imposing edifice of House Courvoisier dominating the river on the right. Turn left and proceed along the bank a ways and then turn into a series of narrow cobbled streets of undifferentiated buildings in varying shades of gray, all leading to a small plaza with a nondescript and understated church. Walk down an even smaller street, almost an alley, and you will spy a small, discreet but highly polished brass plate engraved simply with Delamain et Cie. 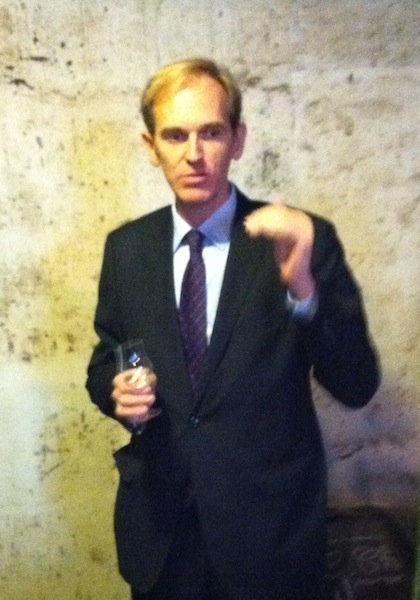 This is the home of one of the most respected of Cognac houses; yet even in the middle of the day in the middle of a normal workweek in the fall, the street is silent and still. Charles Braastad steps out to greet us, immaculately dressed and elegantly groomed, with the European poise of multiple generations of French and Norwegian ancestors resulting in this gracious and soft-spoken man.

Charles leads us across the plaza to an unmarked building undifferentiable from the neighborhood, distinguished only by a single straggling but persistent vine of ugni blanc climbing above the doorway. This vine is the entire vineyard holding of Delamain, for this is a house that purchases finished eaux-de-vie only, chosen exclusively from the area of the Grande Champagne, and then creates its style through years of élevage and blending.

Thus the focus is not on farming or winemaking or distillation but on selection, maturation and blending. Charles works closely with the Delamain Cellar Master and Blending Master throughout the entire process, which may take the working lifetime of both men and reach into both preceding and following generations to come to fruition.

In the first room, the Cellar Master’s otherwise utilitarian office, the walls are filled with rank upon rank of examples of Delamain cognacs going back hundreds of years, all numbered and codified and indexed, an impressive reminder for the Cellar Master and all visitors that a single bottle of Delamain is the culmination and embodiment of generations of vines, of eaux-de-vie, of barrel maturation and of blending skills in a seamless process. 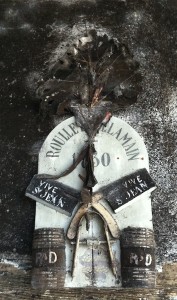 Mind you, this is not the primary maturation cellar, not at all. This is the library cellar, where Delamain maintains a comprehensive selection of a single barrel from each vintage going back countless years. What’s more, these barrels are available for tasting for private visitors, so one can sample the complexities of given vintages directly from the library barrels. Along the edges are cognacs that have matured as much as they ever will in the barrel and are now stored securely in sealed glass demijohns, poised in the stasis of full maturity.

With wine thief in hand, the Delamain Cellar Master proceeds to the most current barrel in the library, 2010, an eau-de-vie in the earliest stages of development, not yet legally AOC Cognac, and just beginning to take on the faintest tinges of what will eventually be a pale caramel bronze in its maturity. The Master proceeds to thief samples from older and older barrels to reveal the maturation curve of cognacs, giving a master-level seminar in a series of glasses, schooling us in the intricacies and subtleties of this slow progression of the natural alchemy of spirit, wood, air, temperature and time.

Time seems suspended here, but isn’t; the clock of nature is inexorable, but it’s quiet, and patient. The walls are coated in the black fungus that thrives on the angel’s share. The still air barely ruffles the cobwebs on the single small window that lets in the damp air of the Charente. The window looks as if it has been open forever, frozen in place, and the frame has taken the same dull tinge of permanence as the walls. The cellar is alive, but frozen by the slow pace into years rather than days, and muted to a hush, so even the shuffling group of visitors speaks infrequently, and in low tones. 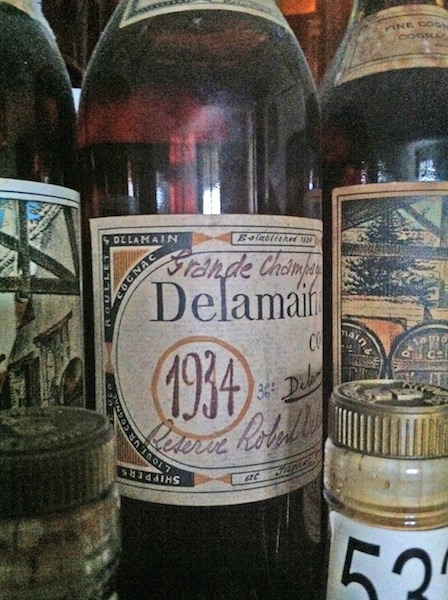 As we proceed to the aging cellars, which must be maintained separately from the Barrel Library cellar, with each barrel placed under an elaborate cord and wax seal, this feeling of age presses down even more heavily upon us all. A brief glimpse through a tiny window, through the dust and weather dimmed glass pane guarded by pitted iron bars, shows a strange world of brightness and color outside; the only color here is the mottled brown and silver gray of the barrels with small splashes of white from the elaborately chalked letters and symbols identifying the barrel, and the small flare of medieval red wax atop each. These are the barrels that will, eventually, become the components of Delamain cognac.

The talking stops, the low muttering and suppressed whispers die away entirely; all of us suddenly realize that many of these barrels will not be broached and blended and released until long after we have ceased to be. We are looking at the past, our past, and seeing what will be the future beyond us. Rather than a depressing sense of timor mortis conturbat, there is a feeling of … continuance; of permanence; of observing a process and flow that is both natural and contrived by man to bridge lifetimes and capture it in a bottle.

But enough of maundering and musing: what does it taste like?

The Style of Delamain

House Delamain has clearly established its style over the many years, and each bottle strives to continue that style. The Pale & Dry XO—or “Délicate et Légère” in the more poetic-sounding French—is the essential standard of Delamain, a barely-colored, honey-tan with the luster of gold, with delicate but intense fruity aromatics lingering in the bowl of the glass.

Current AOC requirements demand an XO grade cognac be aged for a minimum of six years; it is de rigeur, however, that XO cognacs of Delamain be considerably older, and this bottling is estimated to contain a minimum of thirty-year-old spirits. Even then, the slow blending of the varied barrels may take a year or more to complete. To insure the marriage is complete, the blend is then barrel-rested for a further two years prior to bottling. 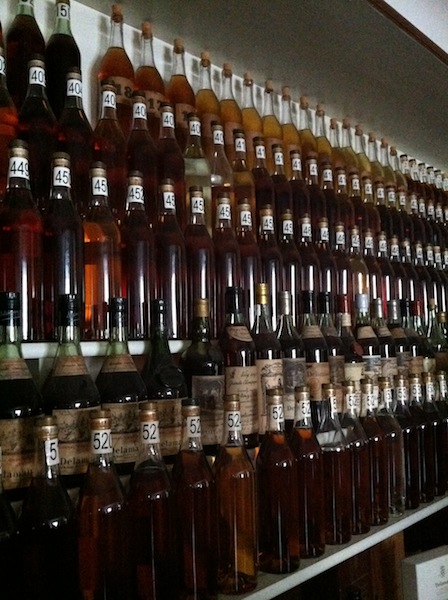 This Grande Champagne XO doesn’t shout; it murmurs with elegance and undeniable grace. Behind the fruit are whispers, first of sweet vanilla, and immediately following that the elusive rancio, the particular character all cognacois strive for, achieved only by the development of many years in oak barrels.

Rancio is described variously as a fused combination of fruit, floral, spice, and earthiness—the four essentials of cognac—all intermingled in an aromatic and flavorful whole. Rancio at its finest, as here, teases the nose and palate with whispers and echoes of the elements…now a light apricot fruit, then a honeysuckle flower, then a delicate hint of cinnamon, then a mushroomy welling of rich earthiness and depth. 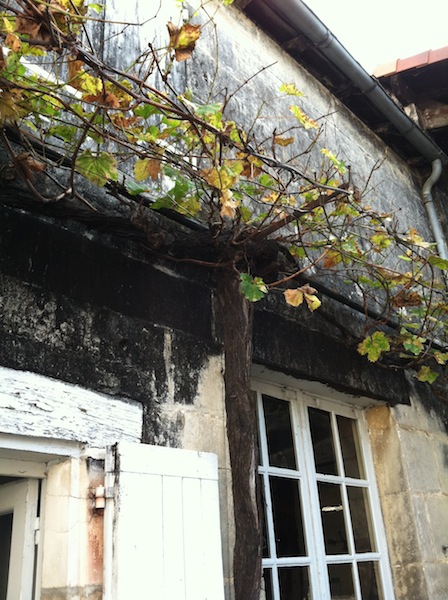 The other iterations of Delamain—Vesper XO, Très Vénérable, Extra, Millésimés, and the rare and precious Réserve de la Famille, a vintage-dated single barrel cognac once reserved exclusively for family members—continue in this vein, with increasing age and color depth and power and intensity of aromatics and rancio.

When we emerge from the Delamain cellars, passing underneath that single symbolic ugni blanc vine, eyes blinking furiously in the sudden bright daylight and with cognac still lingering on our lips, we are faintly surprised to see that it is only early afternoon. For a while, it seems, the Charente flows more quickly and the clouds scud faster across the sky, but then the pulse of life synchronizes into its familiar flow, and it is time for us to move on.[author] [author_image timthumb=’on’]https://palatepress.com/wp-content/uploads/2010/08/Hoke-Harden.png[/author_image] [author_info]An enthusiastic lover of wine and spirits, Mr. Harden left a career in academia to follow his other muse for the last 27 years, trekking around the world to the great wine producing regions. He has experienced every possible facet of the world of wine and spirits as a retailer, restaurateur, bartender, buyer, wholesaler, supplier, marketer, critic, writer, competition judge, and educator. He is currently with Elixir Vitae Wine & Spirits Consultants, holds a CSW and CSS from the Society of Wine Educators, is the Portland Spirits Examiner for Examiner.Com, the Wine & Spirits Instructor at Mt. Hood Community College, and a Master Instructor with the French Wine Academy. His blog is at www.violentfermentation.blogspot.com.[/author_info] [/author]