A Bird’s Eye View of Gigondas: Understanding an Appellation from Above

Every once in a while you get a phone call out of the blue with an offer you just can’t refuse.   My phone call went like this: 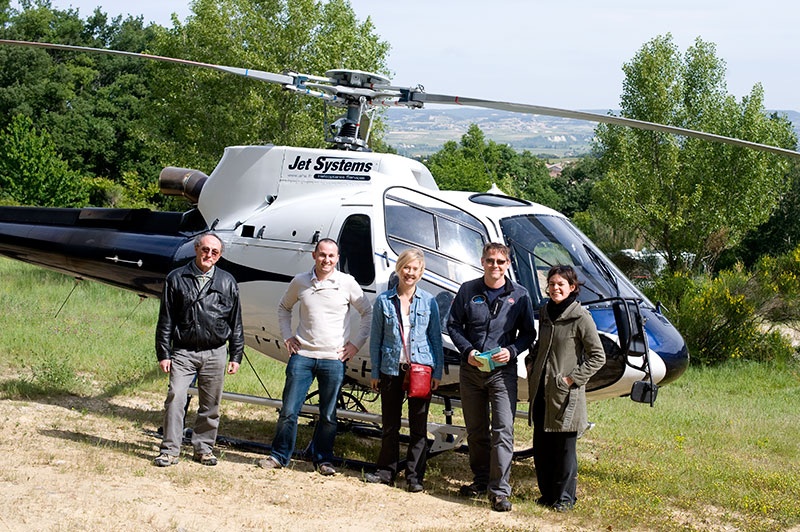 “Bonjour Amy, this is Elodie from the Gigondas promotional board, we have a spot open on a helicopter tour of the Gigondas vineyards next week, would you like to come?”

“A helicopter tour of the Dentelles de Montmirail and the principal vineyards of Gigondas?  You bet!!”

Who could say no to such an offer?  Seeing the vineyards in such a unique way, with a chance to better understand this legendary Southern Rhône appellation, is something you don’t get to do every day. The different terroirs of Gigondas vary widely, ranging from the deeper sandy soils of the plateau that gently rise to the clay and limestone vineyards nearing the village, finishing with the craggy terraces of the Dentelles de Montmirail. Seeing this dramatic topography from above would be such a great way to understand how its different components influence the wines. 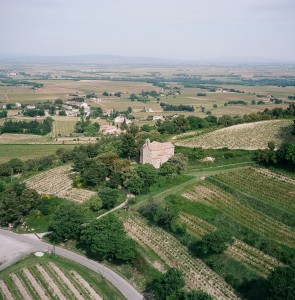 I set out early on the morning of the flight, excited and a bit nervous (I’d never been in a helicopter before), and the famous Mistral wind was howling on an otherwise beautiful day. The flight had been scheduled for a photographer taking pictures for the French wine magazine Terre de Vins, so he and the journalist writing the story went on the first flight. I stood on the ground watching in awe in the company of Pierre Amadieu, the president of the Gigondas wine producers union, and Laurent Brechet, president of the Young Winemakers of Gigondas. We watched in anticipation as the pilot fought the powerful Mistral winds, somewhat happy that they had to brave the flight before we did!

Up they went, spending a lot of time hovering over the famous lieux dits of Gigondas: Saint Cosme and its ancient 12th century chapel, Pied Gu and Pallières, then before we knew it they disappeared behind the majestic Dentelles de Montmirail mountains. A few minutes later they reappeared for a tricky, high-wind landing, and it was now our turn!

I was lucky enough to get the front seat, while Julien Brechet and a young photographer, who is working with the Gigondas appellation on their upcoming book, sat in the back. The pilot carefully strapped in the photographer so that she could lean out the open door of the helicopter! Never wanting to miss the opportunity for the perfect shot, I suppose. 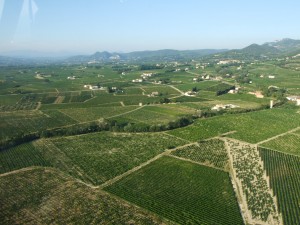 Amazing is really the only word for it. Flying above these famous vineyards gives you a whole new level of appreciation for the terroir. Known for its powerful grenache-based wines that have great aging potential, the profile of Gigondas wines differs greatly from those of its neighbor Vacqueyras. The soils here are not as deep, with higher clay and mineral content that translates into wines that are rich and structured with great aging potential. Gigondas wines tend to be more tannic and brooding than the often softer, more elegant style of Vacqueyras, which is just a few kilometers to the south.

Gigondas is arguably, along with Châteauneuf du Pape, one of the best places to grow grenache in the world, which is why most wines from here are 70% grenache or more. Altitude also plays a big role. The alluvial soils of the plateau begin at 100 meters and climb up around the village itself to finish on the steep hillsides at over 400 meters. The higher the altitude, the poorer the soil becomes, with an increasing proportion of stones on the surface. The soils are well-drained and quickly absorb the rare Provençal rainfall. The stones on the surface retain the warmth of the sun throughout the night, allowing for a continuous vegetative cycle. Finally, the Dentelles mountains themselves play an important role in the terroir of Gigondas, as they shade certain vineyards early in the day and others in the late afternoon, providing a respite for the vines that suffer in the hot summer sun. There is often a slight breeze blowing through the hills. All of these elements—plus the huge variation in vineyard exposition—makes for great diversity in Gigondas. 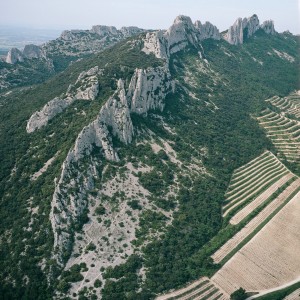 The art of blending

Most often when we think of blending, we think of the percentage of Grenache to the percentage of Syrah to that of Mourvèdre—to use the principle grape varieties here. But in Gigondas the winemakers often vinify each parcel of grenache separately in order to create a final, balanced blend depending on the different characteristics of each vineyard location. It is rare here for a winery only to have vineyards in one place. Often, the families who have been in Gigondas for generations will have ten, fifteen, even twenty different parcels located all over the appellation. This allows the growers to plant each variety where it is best suited, giving them great flexibility when it comes to creating a final blend. The reserve wines will often come from a single vineyard site that the winemaker believes is particularly well-balanced and expressive.

As we rose above the village, the plateau de l’Ouvèze came fully into view. The plateau rises above the Ouvèze river to the west and slowly ascends to the village of Gigondas. The difference in altitude and composition to that of the Plan de Dieu that stretches out below the river and to the west is clearly evident from this altitude. The sand and alluvial soils on the plateau are deeper than those of the Plan de Dieu. 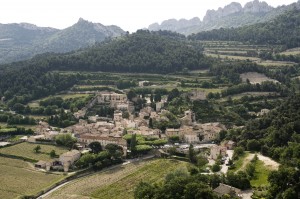 Afterwards, we flew up and over Saint-Cosme, wrapping around the mountain over Pallières et Pied Gu. Then on to the steep Terraces du Diable and the winding terraces of  La Bouissière, each sector seemingly with its own geological origins and composition. From the sandy, alluvial soils that give way to marne and limestone, and then as the hillsides get steeper and the terraces narrower, clay is added to the mix, and the soils date back to the Jurassic period.  It’s breathtaking and mindboggling all at once.

All too quickly, the adventure was over and we were easing back down onto the narrow strip of grass that served as a helicopter pad. Once back on the ground we were all smiles, glancing from face to face, to those who had been up before us and to those who simply watched from below. We were members of a very special club that day, an experience that we would never forget! 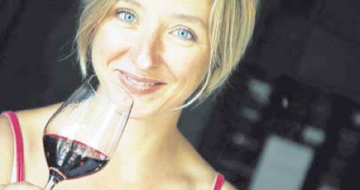