Nutrition Facts…Coming to a Wine Bottle Near You 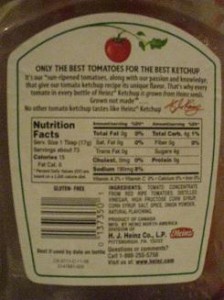 The federal government, through the Treasury’s Alcohol, Tobacco and Trade Bureau (TTB), is considering proposals that would require wine producers to include the same sort of label information on wine bottles that is required on ketchup, chicken noodle soup, and applesauce. The industry, from the Wine Institute on down, sees this as impractical, unfair and anti-competitive, especially as it relates to wine’s position vs. beer and spirits.

Says the Institute, in its comments to the proposals: “We hope that TTB will also not believe it an appropriate government role to make choices that provide commercial advantages to select entities within an industry.”

Yet this approach, say consumer advocates in and out of the wine business, puts the industry outside of the mainstream given developments in food labeling and consumer information. The goal, they say, is more information, not less. “It’s all about transparency,” says dietitian Kathleen Talmadge, RMA, RD. “Any time the consumer gets more information, that’s a good thing. You want them to be knowledgeable about what they’re buying.”

No one is sure when TTB will make a decision. That was supposed to happen at the end of 2008, but the recession and the change in presidential administrations delayed the decision. Since then, the TTB’s bosses at the Treasury Department have been busy shoring up the world financial system and have not gotten to the wine label proposal. In fact, the process started in 2004, when TTB said it would consider allowing “Serving Facts” panels on alcoholic beverages similar to the “Nutrition Facts” panels found on food products.

Also in  dispute: Whether TTB has the authority to issue the regulations for wines with less than 14 percent alcohol, which the Wine Institute claims falls under the requirements of the Federal Alcohol Administration Act. TTB, on the other hand, says the alcohol limit for label regulation is 7 percent, according to spokesman Art Resnick.

What is certain is what TTB has been considering:

• Equivalency measurements; that is, how many servings of beer or cocktails is the same as one glass of wine?

• Ingredient labels, where everything—from egg whites used for fining to grape concentrate added at the end of fermentation to boost sugar levels—would be included.

“What’s far more at issue is the ingredients vs. the nutrition,” says wine writer Alice Feiring, the author of The Battle for Wine and Love: or How I Saved the World from Parkerization. “It’s the crap that goes into the bottle of wine vs. the romance of the wine. That would be my preference.”

This is not a popular stand in the wine business, which doesn’t see the point of the most of the TTB proposals. The Wine Institute, in its comments to the proposed rules (34 pages worth of comments, in fact), wrote that “our comments seek to balance TTB’s regulatory direction with sensible and reasonable alternatives that will accomplish TTB’s goals while lessening costs to the wine industry.” And, it noted, nutritional labeling as a concept is a lousy idea if past performance is any indication of future results. Since the first nutritional labels appeared in the 1990s, it said, American obesity has increased dramatically.

“You can’t actually think of this as something that benefits the consumer,” says Lisa Mattson, director of communications at Wilson Daniels Ltd. in St. Helena CA, a sales and marketing company that represents small and family-owned wineries in the U.S. and overseas. “If you look at the opportunity and the labor costs that go into this, then you have to ask, ‘What’s the consumer going to get out of this?’ ”

Few people in the wine business are convinced that consumers will read a “Serving Facts” wine label. Yes, light beers and low carbohydrate beers are required by federal law to include nutritional information because they make nutritional claims—lower in calories and carbs. But the rest of the beer sold in the U.S. doesn’t have the labels. And besides, they ask, what does light beer have to do with buying a bottle of wine for dinner?

Another objection: It’s one thing for the beer business to able to afford to slap a nutritional label on a can of light beer. The two largest U.S. beer companies, ABI and MillerCoors, control about 80 percent of the U.S. market and the 20 largest companies have 96% of the market. Wine is also top-heavy, but not like that: The 10 top companies control about as much as the two biggest beer conglomerates. And this doesn’t take into account wine imports, which are a key part of the U.S. market. Who is going to explain to a French or Italian producer—who already struggle with U.S. label mandates like the health warning—that they need to add yet another TTB-required label for their wines that go to the U.S.?

Finally, many wonder where the new label will go. Or, as Don Brady, winemaker/director at Robert Hall Winery in Paso Robles, says: “Has anyone at TTB looked at all the stuff that goes on the bottle now?” The back label, which already contains the  alcohol warning, would need to be bigger to include the “Serving Facts” label. And how, exactly, would that work? asks Brady.

No one knows, and Resnick says there is no timetable for a TTB decision or any indication what the labeling will include. The industry’s feeling is that equivalency and specific dietary guidelines won’t be included. But until TTB announces its decision, that’s just a best guess.

Jeff Siegel is the proprietor of The Wine Curmudgeon, and writes about wine for a variety of national and regional publications.